New Orleans The recovery czar, Ed Blakely, pirouetted importantly this week in New Orleans and revealed the 17 (not 15) areas where the City of New Orleans was committed to investing a billion dollars in focusing infrastructure improvements. Importantly, the largest single targeted investment was highlighted at $147,000,000 for the Lower 9th Ward. This is a HUGE VICTORY and hopefully represents a turning point in the potential recovery of the entire city.

ACORN was the only organization invited to the announcement and the only citizen organization outside of public officials and others on the recovery staff.

Mayor Ray Nagin, following the announcement, deliberately came over to Vanessa Gueringer, Chair of the ACORN Lower 9th Ward group, and went down towards his knee and bowed while kissing her hand.

The picture in the Times-Picayune of the announcement showed the bow from the back and wrote about it in the article with a quote from Vanessa about the progress this represented.

The picture in the New York Times was again of the ACORN houses on Delery Street finished last month with ACORN signs in front of the houses.

The picture on the front page of the Times-Picayune on the story of the plan showed three hands pointing to the circle in the middle of the Lower 9th Ward. The hands belonged to ACORN leaders Gwen Adams and Vanessa Gueringer as well as New Orleans Head Organizer Tanya Harris. Gwen caught me in the hall on Friday afternoon and said, “Wade, it’s time for there to be ACORN jewelry!” I asked her what she was talking about and all she said then was, “It’s in my hands!” Later looking at the picture again, I got it!

And, everyone is now getting it after more than 18 months of struggle, we have finally come around the corner and there is a concession that the Lower 9th will be coming back as well as New Orleans East and other key areas where ACORN and its allies have worked. There is a lot of crow being eaten by a lot of people in a lot of places, but importantly for the people of New Orleans, finally the message is being sent by the City through the fog of war in the wake of the hurricane that people are going to be helped — finally — to come home.

All of the people to all of the homes!

Ps. Whatever I have said about Commissar Blakely, he is a quick study and is ALL about the politics. He may make it in this city after all! 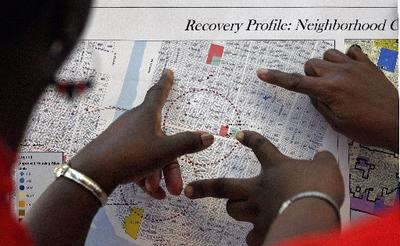 Lower 9th Ward residents Tanya Harris, Vanessa Gueringer and Gwendolyn Adams look over the recovery profile maps to see how their homes will be affected by the new plans (3/29/07).