Houston    According the funny papers, Wal-Mart has started apologizing to some of the groups that it considered “threats” for its surveillance activities, saying essentially to some of them that, “Hey, we didn’t mean to do anything bad to you, and we’re sorry, y’all!”

Must be another problem because we have not received our apology yet, despite the fact that it was widely reported that they spied on ACORN.   We’ve shared space in the state of Arkansas for almost 38 years.  How hard could it be to find us?  They have surveillance people, so I know they can find a phone number listed in the phonebook or Google us and send a note.  A little bit of anything would help to show that they had some kind of raising and manners in Bentonville.

Of course it may be politics.  Seems that they apologized to a shareholder group where they were going to do “threat research.”   The Free Enterprise Action Fund, described as a conservative mutual fund, submitted a shareholder proposal — now, this is so rich, you are not going to believe — to get Wal-Mart to report on its efforts to promote the “social benefits of business.”  This must have been one of the shortest reports on record!

Someone from the National Legal and Policy Center claimed that the real deal here was that Wal-Mart was becoming too “appeasing to liberal interest” (according to the Wall Street Journal.  Wow, who knew!?!  The Center was not happy with a simple phone call apology — they wanted it in writing of course.

But, speaking for ACORN, I can confidently say that a phone call would be good enough.  Even an email simply pretending that they were trying to reach out and say sorry would be dandy.

But, there has been no apology yet on this front.   Seems like bad manners are everywhere you look.  Maybe they know that simply saying that they will stop kowtowing to the liberals is not enough for us, since we wouldn’t believe a word of that, even if we would believe the lie that they were sorry.

Maybe it’s because we are a threat.  We won’t apologize for that. 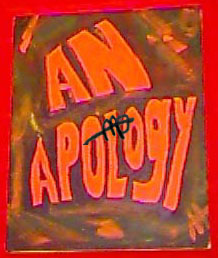