Houston Dead tired flying between Houston and New Orleans, somehow my eyes stopped on a column in the Wall Street Journal that a neighbor on the Southwest shuttle had left on the chair. Way too long and much too much about the office politics of sucking up to get ahead, but still interesting in its own way whenever Jared Sanberg, the columnist of Cubicle Culture, would stumble on a universal.

The brunt of his argument and some of what he cites was the degree to which office politics mimics real politics. He makes an excellent point by saying, “At least in presidential campaigns, there are primaries, polls and pundits that soon silence the grandstanding of all but one. No such luck in the workplace. When colleagues stump for higher office, every meeting is their Town Hall, every email is a debate and every teleconference is an opportunity for attack ads. What’s worse, you can’t change the channel and there’s no little red bulb to signify someone’s time is up.”

He piles it on by quoting a professor, Mark Aldrich, saying, “…there isn’t an up or down vote in the office. They can be around for a very long time politicking.”

After a highly amusing list of names for the players in this game, Sanberg includes a great quote from an insurance executive named Ken Stewart that really got me thinking. Stewart argued that too often such office politicians, “Don’t raise the bridge, [but] lower the water.” All tactics, no strategy, as organizers say all the time about situations where there is no vision or plan but all comment and critique.

A professor of psychology from Arizona State was referenced as noting that people are judged on two standards: “likeability and competence.” Peers rarely want to have to thin the party herd on issues about competence, since, hey, that’s a job for the boss, but the “buddy” system in the context of office or organization can be pervasive and if unchecked by some standards or accountability blurs the lines of responsibility and can obliterate any notions of competence.

The column though ended on a somber note by quoting an advertising executive named Susan Credle, who noted the obvious in some way by observing that even though these inner office campaigns often would not succeed, people could get “pretty high” up in the office where they were able to be a nuisance to co-workers and a danger to the operation before it all came crashing down.

You read this and you understand why organizers at least are always on their way — “out to the field!” The office is obviously a cutthroat place from these reports from the front. 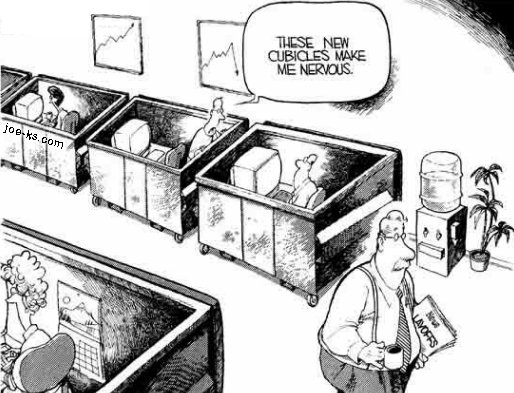