Houston    I love these stories where people are undone by being too slick in their efforts to outsmart the system.  Karl Rove and the Republican National Committee folks fit these gloves perfectly and the story of the RNC setting up an alternative email and blackberry system for political operatives in the White House is just too, too good!

Wade’s rule:  if you think you have figured out something clever that involves double the work, then it is also twice as likely that you will end up making a mess of the whole affair.

You see this all the time with “reply all” when you end up with a message that you can tell was supposed to go to just to one customer, but ends up going to all of the civilians.

Add to this the number of people using a dual system, and it is like compound interest, where the odds of a total fiasco are going to soar exponentially.

It is easier just to be careful about email. Which is not to say that none of us will ever make mistakes — god knows, I make plenty of them.  But, it is to say that at least the mistakes are the same that I would make in a letter or conversation or any other form of communication and are not just restricted to emails!

Outlook express on the modern windows version is a great clue and guide, since it will permanently tell you the 1, 2, 3, 5, or more addresses a correspondent might have based on when you got the email and the response.

Many people have an inner Karl Rove and believe that if they move their “secret” or “sketchy” stuff off of the office email and on to their personal email, no one will ever know what they have done.  This is so old school!  The feds pick up whole computers when they confiscate and go through ALL of the addresses for goodness sakes.

True story:  we fired an employee not long ago who had been up to some mischief and months later when he returned the computer finally, the hard drive was cleaned.  Gee, it must have taken Mark Madere and Chih Chan on our tech team perhaps 30 minutes to rebuild the entire hard drive and everything on it.

Who are they kidding?  Straight up and out front is about the only way to survive these days.  Too bad we will still all make mistakes from time to time, but at least the mistakes will be honest and in the open, and not so sneaky, tricky, and clever that we fool no one but ourselves. 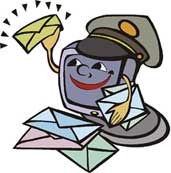