Denver The organizers wanted some perspectives on training, so at the Organizers’ Forum’s Spring Dialogue on training, we brought in to guests.

One was Daisy Rooks of UCLA, who had interviewed 70 odd folks who had passed through the AFL-CIO’s Organizing Institute between 1991 and 2006. The comments from some of her interviews were pretty critical of the experience, but interestingly 25 of the 70 were still working for unions, another 7 were community organizers, with another group of people labor lawyers and other members of the allied trades. Couldn’t have been so bad if more than half found a home in the movement, so although some of the rough landings sounded right, it was interesting to hear how little it mattered.

Our other guest did provide some real eye-openers for everyone. With some help from our friends we were able to get Jim Dreher, a senior vice president at Wachovia, who directs all training for the mortgage banking staff and formerly had done so for World Saving. Pat McCoy, ACORN’s Training Director, had spent a week in the World Training Center in San Antonio last year, and had come away impressed with the seriousness of the program, so we knew this would be instructive, and it was!

Right from the beginning of his remarks, Jim shared a central tenet that surprised them, and that they had “sliced and diced” a million ways, but it always came up the same. The single most important factor in retaining a new employee both at the beginning and throughout a career was their first experience with a supervisor. He made it very clear it was not money, travel, job assignments, or anything else. It always came back to the beginning. In fact even bad supervisors and bad work experiences down the line were often trumped by that initial, good experience with the first line supervisor. The other side of the coin was equally true. If the initial experience was bad, then the odds ran heavily against retention and long term career stability for the new employee. Consequently, they spend a lot of time training first-line supervisors in the care and nurturing of new employees. Makes sense doesn’t it?

Their training program is based on 60% experience, 10% understanding the manuals (HR and the rules and regulations), 10% self-directed learning (everyone has the opportunity to learn other jobs on line, through videos, and in other ways acquire and test skills), and 20% via direct supervisors in coaching, mentoring, and so forth. The 60% experience is based on regularly changing assignments as they put staff on the track in identifying “high potentials.” At the corporate level they identify people and make sure that they are reassigned regularly every 18-24 months into new experiences. They are often required to move of course to keep on the ladder. Development of staff counts towards supervisors, while hoarding of staff counts against them, but is also simply not allowed. As Jim said, “They have no choice.”

In developing next stage managers they use a 5-day intensive program of team building, problem solving, and competition with 24 people in 4 teams of 6. A lot is focused on listening, just as the core evaluation determinate is based on “customer service” and satisfaction.

It was interesting to hear the steps they took when they needed to change their business model when they realized that their staff was not “selling” the other products of the bank to customers. It was also fascinating to hear how they “sourced” employees both for general work as well as to achieve diversity. On one side he offered a story about the centers that they had developed in Utah at the two state universities there to develop people and how you had to be recommended by an existing worker to get in and the benefits of the increased maturity in setting expectations correctly for work (which had been a theme Daisy Rooks had dwelled on in the negative setting of expectations in recruiting). On the other in achieving diversity the concept of sourcing, high level attention, separating women from men in development, and other programs were fascinating, even though Jim was not willing to claim any great success at this point.

The language of “leadership” was a constructive frame. Clearly, we rarely use it because leadership speaks to the governance process in mass-based organizations, but the obsession with leadership in the corporate arena to develop to next stage competency, managing others, and filling the top rungs of the organization was clear and transparent. Perhaps we are not being as concrete in this area as we need to be in order to get great leads and excellent managers.

There was too much to report, but it was compelling to all of us how many of the problems and the strategies did not seem alien, but in fact resonated deeply. Even though we might be employing only a 1000 or so and they were employing 110,000, everyone mattered and we both succeed by our own lights and couldn’t do so without constant achievement and continually being prepared and raising the bar. 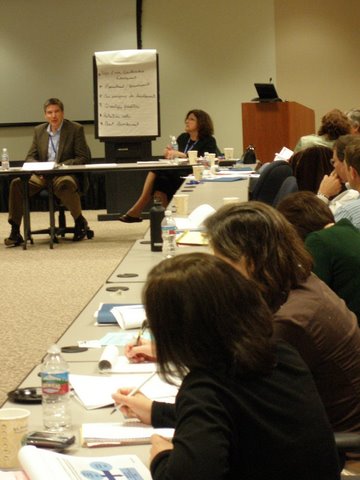 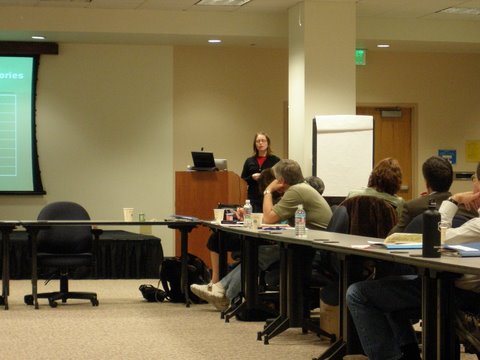 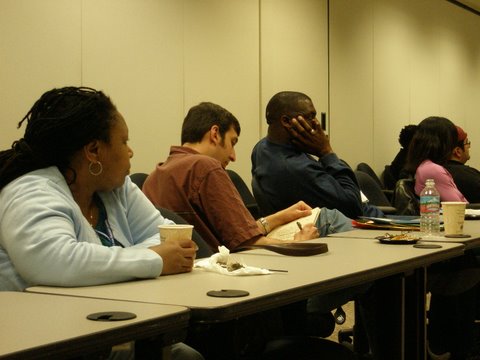