Washington The board stumbled to the street in the pre-dawn hour of 6:00 AM at George Washington University to climb into the yellow school buses to ride the short distance to the Washington Hilton to be ready for their first interview of this electoral season with Governor Bill Richardson from New Mexico. In order to make this happen he had taken the late train from New York City so that all of this would fit both schedules.

Governor Richards beat the coffee and the interview began at 6:50 AM as he clutched a tall blue coffee cup. He was surprisingly good! The reason was simple. He knew ACORN, and he could cite the real stories of campaigns we had fought together, sometimes as partners and sometimes pushing and pulling him a bit on predatory lending and the minimum wage increases. When he said that sometimes “ACORN could be a pain in the ass!” the board roared because on that issue we knew he was telling the truth, and we had been through the wars together.

Richardson was careful to say that he was not just for indexing of the minimum wage but was for the “living wage.” He was good on the community building questions. He surprised many of us, including me, when he asked exactly how much we had been cut on our housing counseling grants from HUD; he then told us the figure of 40%. He was very, very good!

He missed a question from the new selection of policy choices. We asked that he join with us to require “community impact statements” for large scale public or private developments with governmental tax support, subsidies, or disproportionate impact. Our experiences with similar requirements in California and Florida have convinced us that these impact assessments provide huge protections. Governor Richardson handled the matter deftly by asking in his answer if he had remembered all of the questions and we were in good shape. By that time in his answer few heard the “skip over” of the first question, and he glided easily into the next response.

An impressive performance by a candidate too often seen as locked in the pack away from the leaders, but the nodding of the ACORN leaders and their response to someone who had been in the trenches with them was positive. As Richardson worked the room walking out to applause, shaking hands, calling the men “buddy” and taking the kisses and hugs from some of the women, you knew you were watching a pro trying to find an inside track.

This is going to be an interesting race! 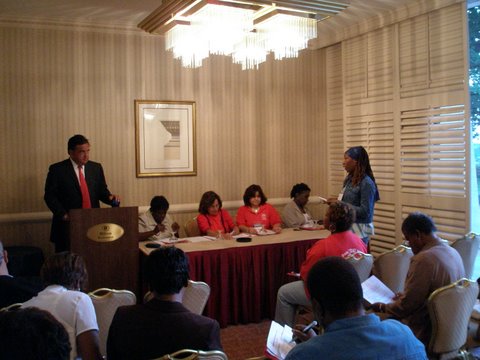 Governor Bill Richardson being interviewed by the Board 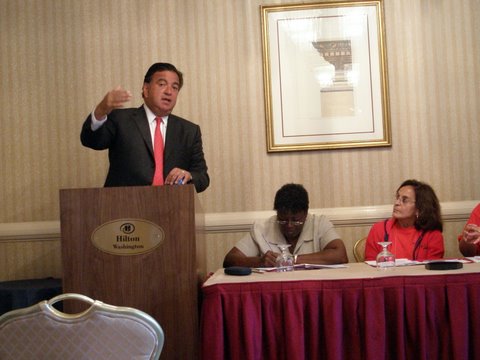 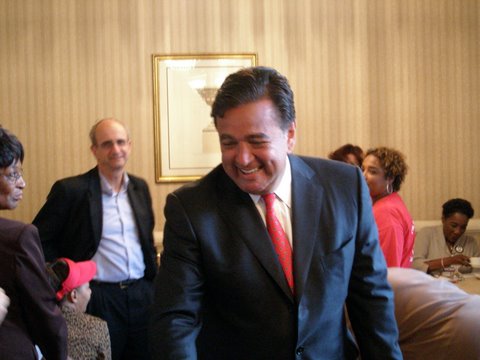