San Francisco     Finally, it turns out that we have an actress that we can truly believe in because seemingly she knows all things both great and small. To my great surprise it turns out to be Cameron Diaz. We all knew that Angelina Jolie was going to change the world (thank goodness!), but some of us may have underestimated the fact that Cameron had the clue to all human knowledge. Previously her fame rested on a great smile and long legs, but it turns out that Cameron knows all. Perhaps we should not have been shocked to find this, since after all, she was one of Charlie’s Angels in the movie, but I thought that was just a movie. How little did I know?

Cameron knows Chinese! O-mi-god! Do you know how hard that language is to learn? Linguists say it is 9 times harder than English, and many of us are still working on that. She obviously does not just speak Chinese, but can read the characters as well! Amazing! How did she find the time, when she was only a simple tourist there from most reports? But, indeed she knows Chinese. How else can you explain the fact that according to all recent news reports, she would have known that some purse she wore while breathlessly hiking up Machu Picchu in Peru bore the Chinese slogan “Serve the People.”

Cameron also knows Chinese history! O-mi-god! She even should have known that “serve the people” — which frankly sounds like kind of a boring, white bread kind of a slogan to those of us who are simple minded — was a favorite of the Chairman and Great Helsman, Mao Zedong.

Cameron also knows Peruvian history! O-mi-god! I thought she was just another of the long stream of tourists probably going to see the ruins, but no, it seems that Cameron would have also known that Sendero — the Shining Path — was a guerilla group for years operating alternately in the countryside and raising cane (and blowing up the odd item) in Lima. Of course this was some years ago, let’s say 20 at their heyday, but, damn, Cameron knows all of this!

Cameron knows manners, too! O-mi-god! Cameron would know from what I gather that adding all of these loose bits and pieces together: reading Chinese, knowing Chinese history, knowing the political relationships between Chinese Commies and Peruvian political bad asses, would just possibly, according to the press reports, offend someone somewhere in Peru as being insensitive. Cameron knows higher math: she would be able to add up all of these nothings with one zero after another and somehow come up with something. Einstein would have been no match for Cameron! I hope he’s not offended at my saying so, and I apologize in advance if he might have been.

Cameron apologized for hurting someone’s feelings somewhere somehow. Someone, somewhere, somehow knew that Cameron knew everything and was just acting on the cute-dumb-blonde “frame” of Hollywood, when in truth, Cameron knows all, and probably really, truly, deep down knows exactly whom she may have just possibly offended.

Cameron must know all, because I’ll be darned if I can figure out who might have cared what purse she wore in Peru! 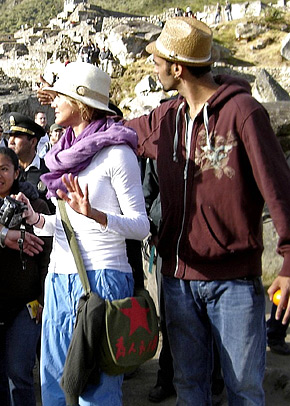