New Orleans        The Social Forum movement has been an interesting and important development over the last decade.  Beginning in Brazil, fueled by the growth of the Brazilian Workers Party and the election of Lula Silva as President of the country, World Social Forums have enjoyed private and public support and have held large annual meetings not only in Porto Alegre, Brazil, but also in Mumbai, India and Nairobi, Kenya to export their philosophy and practice.  Other social forums in Europe and regionally have been held with significant numbers, and some countries like India have held large and important gatherings.  It was inevitable that there would be a United States Social Forum at some point, and it is now happening in Atlanta.

Some ACORN members are attending the sessions from Georgia ACORN and Florida ACORN in order to be part of the experience.  The expectations for the Forum had increasingly been scaled down as the event came closer.  Numbers being touted in Atlanta a month before the forum expressed hope for 5000 to attend.  This was not going to be as big as others, but for it to work it had to be real.  The social forum movement originally was designed to be a counterpoint to the annual meeting in Davos, Switzerland of all of the big whoops from governments, NGOs, and business that assembled in late January to talk about the economic future of the world, as they know it.  The World Social Forum was designed to allow the “rest of us” to participate in a similar experience from the other side of the line.   In these times when the progressive forces are optimistic that the future is moving in our direction, this could have been an important gathering.

Early reports indicate that the turnout is less than hoped.  Papers and police seem to have said perhaps 1000 were in Atlanta for the opening ceremony.  Pictures in the Atlanta Journal-Constitution of the march certainly show a line that seems sparse and spread out.  More troubling is that the message seems to have been marginalized, so perhaps the organizers lost control of the framing for the meeting.  The reports seem to focus on fringes and to almost ridicule labor and other mainstays of the progressive forces for association with such a hodgepodge.

Hopefully, the reports once they come in from our members will indicate that the workshops were strong and the underlying value of the US Social Forum was good, but it is unfortunate that a meeting, that holds both diversity of course but also resonates with advancing the broad array of progressive values and movements on the world stage, seems not to be getting traction in the United States.   Perhaps we should have organized this one differently from the front end.  Now we may learn some lessons, but it may be too late to hope to get back on track for the future. 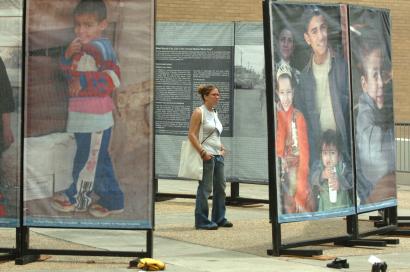 Liz Lichtman of New Orleans looks at a display at the Atlanta Civic Center on Thursday during the U.S. Social Forum.