New York    On a plane again after being mostly in New Orleans for two weeks, so I am again looking at the callow scowls of men and women speedily sleep walking through airport corridors as they rush on to these modern buses with wings trying to get from here to there.  Brings me to notes and updates on recent items brought to your attention from time to time.

*Jakarta    In case you missed the recent comment, the Constitutional Court (like the Supreme Court) has ruled that independent candidates and parties must be allowed on the ballot in Indonesia.  This has turned the election topsy-turvy, and no one is sure if the election can possibly be held on August 9th ACORN political organizer, Krista Holub, reports.

*India        Speaking of August 9th this is the date set by ACORN India’s FDI Watch Campaign for the “Out of India” national protest.  Response so far has been excellent reports ACORN India Director, Vinod Shetty. Leaders from Mumbai have been touring cities around the country to gin up support.  The Wall Street Journal published an article about the call to action last week.  Dharmenda Kumar, campaign director for the India FDI Watch Campaign based in Delhi believes the numbers involved will be significant in several major cities and the press and political attention could move the campaign up another notch in blocking the unfettered entry of big-box retail.

*Minimum Wage Increase to $5.85    July 24th the minimum wage truly did go up after almost a decade from $5.15 to $5.85.  AP articles quoting Sonya Jackson from Mississippi ACORN ran in more than 60 papers along with many other notices of all the hard work over the years to get to this next rung on the ladder.

*Strikes in Peru        We haven’t had a report from Peru for some time, have we?  Doing Google talking this week with Emily Andrews, who is working to upgrade training on ACORN International’s staff for six months, she filled me in on the wave of strikes that roiled the country and the Alain Garcia’s new government in recent weeks.  50,000 strikers hit the streets in Lima in reaction to firings among teachers.  Uprisings in rural areas followed quickly around inflationary price increases for bread and cooking fuel.  The government had to cap the prices quickly and make other concessions to blunt the impact.  None of this was much in the news in the states, but the impact in Peru has been huge.

*Buenos Aires        Speaking of inflation, all of the reports from Argentina ACORN indicate that inflation is continuing to spike, and the energy crisis is acute, especially outside of the city.  A trip to Patagonia on a weekend on my coming trip there was scrapped for fear we would be stuck with no heat in the Argentine winter.  Snow in Buenos Aires for the first time in 89 years became a footnote to climate change in the southern cone that excited many but scared most.

*Korea        Na reports briefly and tantalizingly that he and others organized an independent party in recent weeks to support progressive changes in Korea, but says details will follow and has left me, and now, you, hanging on the next report.

*Kenya        We gushed about the “miracle” of Cheryl Broetje and her family’s faith which began funding the Vista Hermosa Foundation from the fruits of their cherry orchard some years ago in eastern Washington.  The foundation this week informed us that they are investing in our plan (also discussed in these blogs) to organize ACORN among slum dwellers in Kibera and other mega-slums in Nairobi and assist in doing the same in Mexico City.

How about all of that?!? 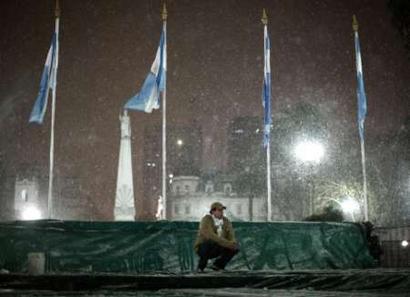