Buenos Aires        At dinner last night we found ourselves talking about the last elections for Mayor in Buenos Aires as we watched Christina Kirchner, the wife of the current president of Argentina and prohibitive frontrunner giving a speech in Rio Gallegos on the restaurant television with the sound turned off.  There is mandatory voting here, just as there is in Brazil, and some other countries.  Some voters cast a vota blanco — blank ballot — as a protest when they don’t like the selection of candidates.

I find this all very interesting.  There are multiple parties with ballot lines, so normally that should mean that voters unhappy with the leading party candidates would, or at least could, simply cast their vote with the party with whom they feel the most affinity and have their say, or even their protest, that way.  Fusion is not practiced here, allowing minor parties to saddle up with the major party candidate though I do not know that it is illegal; it is simply not practical in the same way particularly if the major parties fail to control the legislative bodies and are forced to form coalition governments.  At those points the minor parties, and this is the case in Canada with the NDP for example, have real leverage to make or break the governments and their policies.

The system is creative in Argentina as I understood the explanation (being impaired now in two languages means my margin of error in clear communication has increased immeasurably!).  Voting is required, so let’s start with that.  Once casting your vote you can either ask for a party ballot or vote straight down the line or you can choose to cut and paste your preferences on your ballot and vote what we call a “split ticket” ballot in the United States.  All of it goes in an envelope when you vote, which is also how you can simply vota blanco, proving you voted but essentially thumbing your nose at the process.  The opportunities for protest are always endless.

I am not sure what policy objective we achieve in the United States by eroding our own democratic intentions by making it harder to vote, easier to get kicked off the rolls, and as we know, creating an extra effort to get registered.  Registration costs tens of millions of dollars to achieve and is still fraught with technicalities and obstacles.  The popular will of the people is harder to express and fathom with hardly half of the registered voters bothering to cast ballots now and the percentage dropping off even more when we look at the achieving maximum eligible participation.

So, why have we not done something about this in the United States either making registration automatic or at the least or voting mandatory at the most?  I think the dirty little secret is that the parties and politicians do not want to admit is that they like representing the sliver of the potential electorate that is most like themselves:  richer, whiter, and living nearby.  That job is a lot easier than representing the constantly increasing needs of the vast majority, the great masses of citizens and their claims.

But, if we really do believe in a democracy and want to finally make it work, we cannot continue to sit passively by and bemoan the fact that it is hard to register people and even harder to get them to vote, we need to finally tell the truth and do something about it.  Argentina and Brazil just up the Atlantic coast may seem to have the right idea, so why not just copy them and move forward finally? 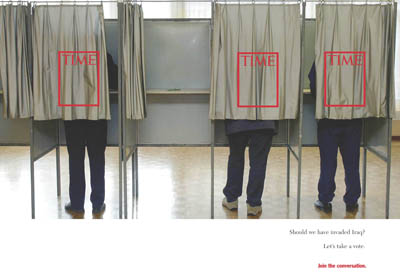