New Orleans        The President was in town.  There is a picture in the morning paper of him rubbing Mayor Nagin’s head and another one of him with Leah Chase since he and his buddies all broke bread at the Dookey Chase place.

There was a story in the paper over the last couple of days about how much FEMA had promised versus how much they had paid.  The differences were in the billions of dollars.

There is evidence that people are coming back more strongly than many observers had predicted.  We are up to perhaps 2/3rds of the pre-K population, somewhere between 270-300,000 people.  On the other hand the Road Home closings are still hardly 40,000 of 180,000 applications made, so for the most part people are still coming back broke and empty-handed.

Visitors still tour the neighborhoods that were flooded and comment that it looks like it happened yesterday.  We are still trying to finance and put the final touches on a project that could build between 225 and 500 units in the lower 9th Ward, but it is anything but easy to make happen, regardless of the need.

Insurance rates have gone up phenomenally along with property assessments, but many people are still waiting for insurance settlements and even with city revenues rising, we recently learned a couple of months ago we still can not afford to put fluoride in the water now.

The back was finally broken on the Canizaro Committee to Bring New Orleans Back, but he was one of the small numbers of guests meeting with the President for lunch.

The demographers concede that people are moving back and that the “shrinking footprint” arguments have been beaten, but hedge their bets by saying that that is only true, if there is not a new hurricane and more flooding, and then the “footprint” wars will be on again.

Still a long way to go. 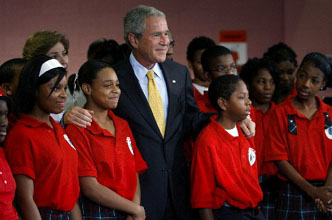 NOLA.com caption: President George Bush poses for a photo with students after a speech at the Dr. Martin Luther King, Jr. Charter School of Science and Technology on Wednesday.