Atlanta        Wake up at 4 AM, run, eat breakfast, try to start the truck unsuccessfully, steal one of the cars parked in front of our house to make the 7AM Jet Blue flight to New York’s JFK airport.  Roll in 15 minutes late to a message that half of my team slept through an alarm in the Midwest, so I start calling in excuses to the three managers from GE Money and their subprime affiliate, WMC, waiting in the small lobby of the Brooklyn ACORN office.  Schlep over on the #2 to 14th Street stop and then sweat through my shirt in the unseasonably warm and humid day as I walked to Union Square to meet Reena Desai and discuss our India FDI Watch campaign.   Sitting outside at the Coffee Shop, a steady breeze reminds the us all that there are small blessings on hard days.

A cab to LaGuardia finds me in the wrong airport for a Delta to Atlanta, so another cab puts me right back in JFK.  A 40 minute delay to Atlanta ends up stretching on the tarmac to three hours so that we land in Atlanta close to midnight and more than an hour after the last flight to New Orleans has long departed.  Calling on my cell phone to the 800# for frequent flyers while I find a van going to a hotel, the poor phone person tries to grab at explanations saying perhaps the plane was late from Italy or maybe it was an air traffic hold, none of which were true since the pilot had continually been refreshingly honest and admitted that he could simply not beg a ramp truck to push the plane out of the gate and get in line.  Five hours later I’m waking up 8 minutes from the airport and moving out with the very small crowd that acknowledges 9/11 by actually flying in the near empty airports.

All of which made me frequently think of Travels with Herodotus by the excellent Polish journalist, Ryszard Kapuscinski, who passed away earlier this year.  My brother had given me the book for my birthday and appropriately I had read it in Quito during free moments.  The architect of the book is Kapuscinski, writing about his early years moving from a provincial Polish experience and trying to find the world out there without language or clue as he ends up in India, China, and Africa with few skills 50 years ago other than an open mind.  With him on many of these trips throughout the years he reads and rereads the early Greek historian, Herodotus book of histories of the wars and struggles of the various Greek cities and towns to find a way to live in some semblance together.  The wars of conquest waged by Darius around the known world captivate Herodotus, and he travels by the hardest on land and water between what we would now know as northern Africa over to the edges of Iran and India trying to sort out fact from fiction.  In this excellently written book that splices the calm and horror of what Herodotus often reports with the chaos of what Kapuscinski is seeing and reporting in the civil wars of the 20th century in Africa and elsewhere, one finds a perverse peace from the melding of perspectives over 25 centuries of time.

On this short trip up and down the eastern coast of America, it gave me a way to place my time in a context that somehow made it easier to think of tomorrow without a whine.  All it a day’s work.  All in a day’s travel.

Me, Herodotus, and Kapuscinki all together again. 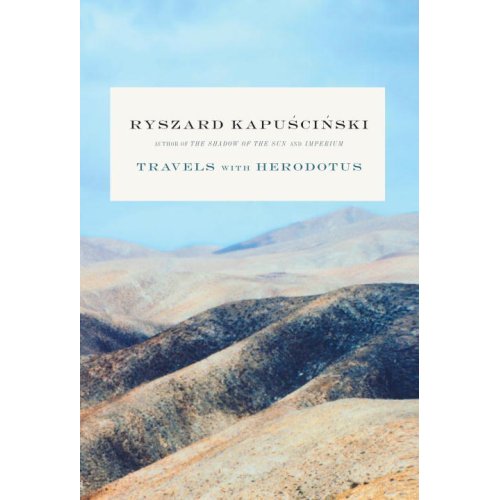