Dallas     Flying into Dallas a piece caught my eye about big cities turning white, or as they more elegantly reported in the Times showing a decreasing percentage of non-white population. The trends were noted in New York, Chicago, Los Angeles, Boston, San Francisco, and even Atlanta. The piece was sprinkled with curious quotes that seemed to argue that this trend reflected the mobility of upper class white youth looking for higher status opportunity and adventure.

One commentator mentioned that this might cause strain on the “working poor.” This person was from the Community Service Society, which was described as a “liberal research and advocacy” operation. The fact that CSS was formerly a New York City settlement house and could now be so described speaks volumes in and of itself.

The 800 pound elephant in the room seems hard to miss — this is part of the trend to the “executive city” that we have discussed in the past. People — at least regular working families — simply cannot afford to live in many of these cities anymore. This short list of towns could add to its number Seattle, Vancouver, San Diego, San Jose, and a few others where working incomes of two-earned families simply can not tote the note. Given the other sizeable and same sized elephant roaming in the room is also the lowered pay rates and job classifications for minorities, then why is anyone surprised that we have a growing problem?

For a generation experts have spoken, but perhaps not plainly enough. There will continue to be sprawl unless there is a more concerted and heavily financed and subsidized fair housing environment that assures affordable housing. Without affordable and fair housing protections and inducements, then diverse populations both by income and race are increasingly not going to be possible to achieve.

Laissez faire housing development, especially in the midst of the current crises that is going to put huge strain on working families to access affordable homes because of tightening credit, are not going to leave us the kinds of cities that are viable in terms of equity and opportunity. This has to become a priority. 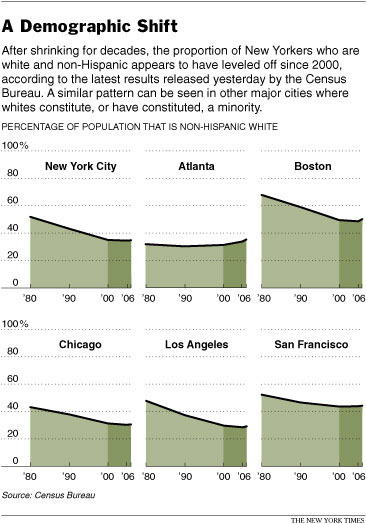