Denver      I have a lot of fond memories of the City Park in Denver. Though it was many years ago, our family, that is to say my parents, brother, and I, spent some weeks in Denver every summer, long after we had left the area near Rangely, where we had lived in a California Oil Company camp and where my brother was born. Rangely is on the front range, less than 20 miles from Vernal, Utah and the Dinosaur National Park, but that’s another story. One summer we had the mumps here. Another we went to Bible School. We always went to the City Park in Denver.

I can remember watching fireworks over the lake with its water fountain as a boy. I can remember sitting in the grass near there 30 years ago with Maureen McGoorty and Mike Shea, 30 years ago when we opened the ACORN office in Denver. At dawn for several days I enjoyed thinking about these things as I ran around the lake on the new, wide sidewalk obviously only recently completed, supposedly as part of the touch-ups to prepare for the Democratic Convention next year.

The best thing about the park was never the lake or the trees or the grass, it was the Museum of Natural History, and that wasn’t the best thing either because the very best thing was the dioramas. The best of the dioramas were those where you could almost press your nose against the glass in those days and feel like you were really seeing the mountains rise from the plains and the buffalo herds thundering into view. You could imagine that you lived in the intricate Indian village and hunted on horseback yourself. Everything in the diorama seemed so real because it was real after a fashion with feathers or fur and stuffed and preserved expertly. The dioramas in the Museum of Natural History in New York City when I saw them later in life always seemed great, but somehow in my memory they were never the equal to the ones in Denver. I did not go visit the dioramas this trip to Denver, though I often have with one excuse or another, largely because I was assured by John Buchanan, the proprietor where we were staying, that the dioramas where still in tack and still looked, in his words, “like they had not been dusted in 40 years.” Everything is as it should be then, I thought as long as the dioramas still have pride of place in the Denver park pantheon.

Running around the lake though as the light broke and the Canadian geese honked loudly, I took a turn to avoid clouds of gnats that kept forcing me to lower my head while jogging and let the cap bill take the brunt of the flight. I jogged off towards a newer looking statue or monument of some kind. It turned out to be five years old and a memorial to Martin Luther King, similar to what can be seen in many American cities. This one seemed very different as I got closer. There were other statutes around the center under that of King. I could see Fredrick Douglass, Harriet Tubman, Sojourner Truth and Gandhi. None of them were identified in any way, but they were there looking in various directions. Around the circumference of the traffic circle enclosing the monument were slabs of concrete or marble perhaps with other, smaller statues inside them. Two slaves bound in chains in one and etched in stone next to them were the historical timelines of the terrible passage. A man and woman who seemed to be sharecroppers were depicted in another along side the history and dates of the time to passage of the 14th amendment. In another I found the markers of the civil rights struggle. It was almost too much to take in on the move. Even around the base of the larger monument depicted in the way one sees Civil War battles with troops moving against each other, I could see the bronzed protestors marching with signs towards the police. King’s quotes were elsewhere. The dates of his struggle were in yet another location. All of this was quite amazing, and it turned out that it was constructed and dedicated in 2002 while Wellington Webb was serving as the first African-American mayor of Denver. As I ran away there was a plaque of sorts embedded in the sidewalk to “all of those who had dedicated their lives to social justice.”

It was a wonderful and moving surprise as the sun broke over the trees to find that there was a new King of this park, and one that stood for something timeless and would last long after the dioramas are forced to yield to something digital on a wide screen of some sort. The fight for social justice may not find much encouragement, but it must survive even the buffalo herds. 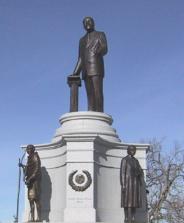 Statue of Martin Luther King, Jr. in City Park with Mahatma Gandhi on left and Rosa Parks on right