Delhi The common wisdom in Delhi is that you have to be at the airport three hours early for an international flight. That meant waking up at 3:30 AM, but of course not wanting to miss the flight I get up first at midnight and finally at 2:45 AM.

Water is a problem in Delhi that I never understood as clearly until this time when I stayed with my friend, Ashutosh Saxena. Water is rationed, especially now in the dry season, and only comes twice a day for an hour at a time. Barrels and tubs are filled up inside the apartment from place to place and a tank is filled up on the roof for the two households and the office. But, sometimes the water only comes once a day and we wait. You need water for everything, and this reminds you clearly how dependent you are on this staple of life. Ashutosh has a filtering system that purifies the water in his kitchen. Upstairs they come down and fill up plastic jugs several times a day so that they have water there as well. In the middle of the night there is no water for a shower. At 3:00 AM in the morning I took a tub bath, dipping the small ubiquitous plastic pitchers I see everywhere around India into the tub and pouring the cold water over and over on me and the tile until the soap is gone and I can call me clean. It has been 33 Celsius during the day in the Delhi which is I the mid-90’s Fahrenheit, but the mornings are dry and cool. It’s a wake-up!

Outside past the whirring fans I heard a rhythmic clang that would intermittently be punctuated by a shrill whistle in the quiet night. Over and over, you could hear these sounds whenever the watchman made his loud rounds among the apartment blocks. A wooden staff taller than the security guard would thump the concrete hard and make a sound that carried through the night. I was surprised that somehow I had only heard this symphony of crash, whistle, and dogs this one morning. Ashutosh calls the man a security guard, but without that identification there would have been no way to identify him as such except by his purposeful walk and regular passage. Other men come by and lay damp rags on cars, marking them on a block, and then coming back and wiping them down. These are security guards too, it seems, and this is how they supplement the small rupees they are given from the security “contractor.” It all makes a certain amount of sense. There does seem to be safety in the constant crush of people at all places and times, but somehow in this neighborhood of Manrika, they do not seem to feel so safe given the heavy doors, gates, huge and multiple locks, fences around cars, and scores of security. What do I know?

We drove the streets without stopping for red lights at 4 AM. Trucks are only allowed on these streets 7-days a week before 5 AM. They do not stop for red lights. Stopping could get you rear ended. We passed mini-vans full of call center workers heading towards shift changes. We passed the separate, huge terminal that only exists in Delhi for use by Muslims during the period when huge masses of men are flying to Mecca. Even then International flights are often delayed because of the extra air traffic.

Does that mean that I could have gotten to the airport later? Hardly! Possibly I managed to catch the last wave into the beach. The plane was delayed for takeoff by more than 1-hour waiting for 70 passengers caught in the security lines. A man across the aisle complained of having been at the airport 3 hours early and caught in the line for 45 minutes when it did not move. Where was he? Just behind me? What might have happened? He described yelling, chaos, a near riot. I saw nothing.

I know nothing of the spirituality of India only the sway and surge of the people, and that is quite a lot to wrap my arms around. 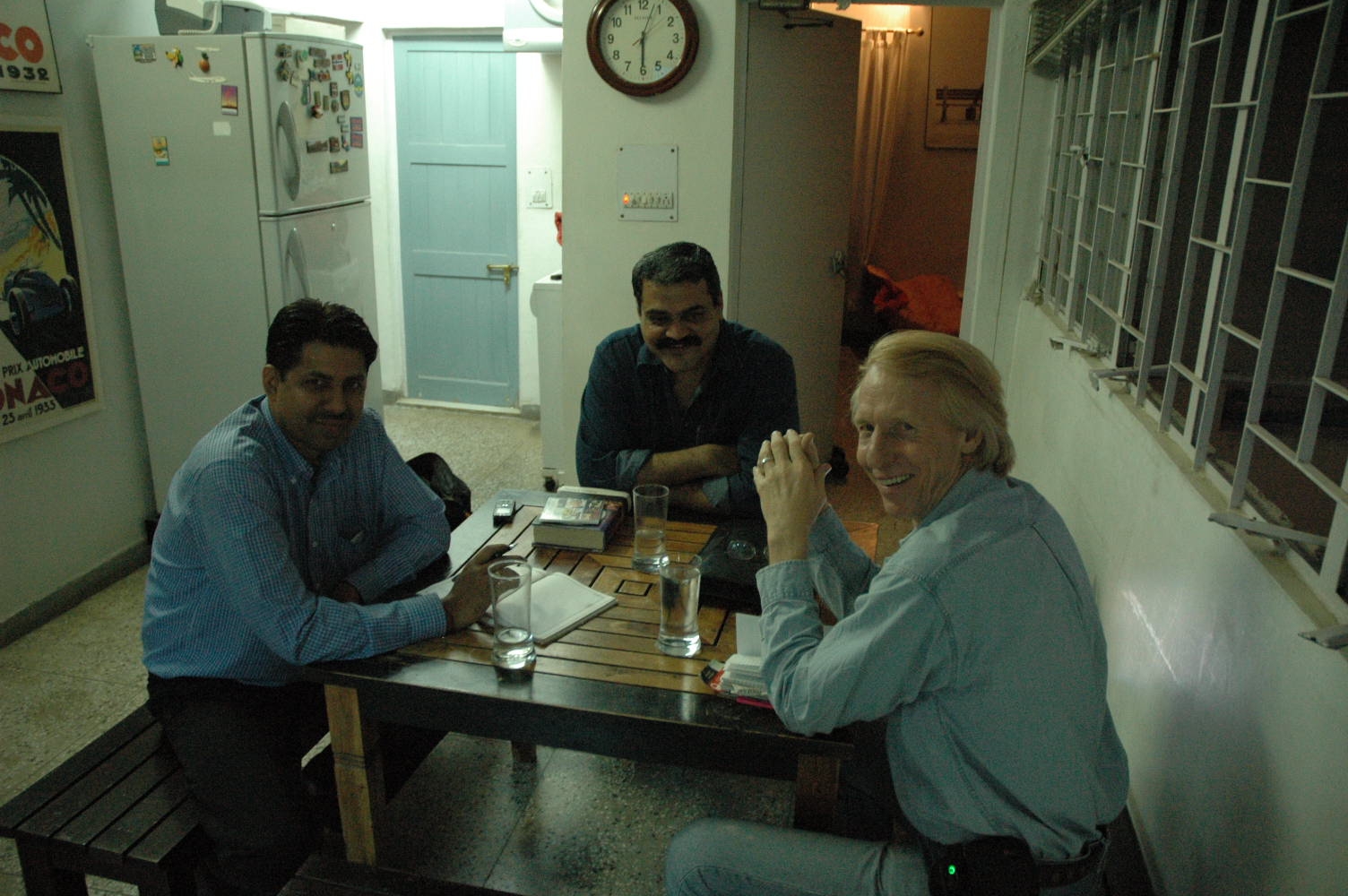 Dharmendra Kumar, Vinod Shetty and I during a meeting