New Orleans     There was an interesting picture in the Sunday New York Times in the “Week in Review” section. In the standard daily reductionism we are supposed to see everything in the simplistic terms of whatever polarity is moving the news of the day. In the current juxtaposition we are simply dealing with race and gender. The “art” for the article though was more powerful and interesting than the article itself.

It was a simple picture with the cut line that said: “Two Movements — Bella Abzug and Gloria Steinem with Jesse Jackson, superstars of their eras.”

I already had to answer: Who was Bella Abzug? She was a New York City Congresswoman and a dominant feminist voice both in Congress and outside of Congress. Gloria Steinem was the well know feminist of course and the force behind Ms Magazine. Jesse was (and still is) Jesse.

One of my readers pointed out to me that the picture was wonderfully humanizing especially since we are so accustomed to the demonization of social movements. People in the picture are relaxed. They are enjoying themselves for a minute.

But the picture is so much more than “Two Movements.”

At the right of the picture is George Wiley, Executive Director of the National Welfare Rights Organization, the most significant movement of lower income families of its time. Since he has been dead for almost 35 years, this is a face unknown to the photo editor of the Times.

I’m not 100% sure but I’m darned close to 100% that the man with balding head and black glasses behind Congresswoman Abzug is none other than the famous baby man, Dr. Benjamin Spock. The room behind the picture looks like a Congressional hearing room. Spock was best known as a spokesperson for peace and the anti-war movement in that era.

One picture, four movements! All of them very relevant to the issues and debates of today — 2008! There might be different people in the picture today, but all of these issues and constituencies are vital to the debate of our time. No sense trying to boil it down to a false dichotomy when all of these movements are crucially addressing the dominant issues of our time. 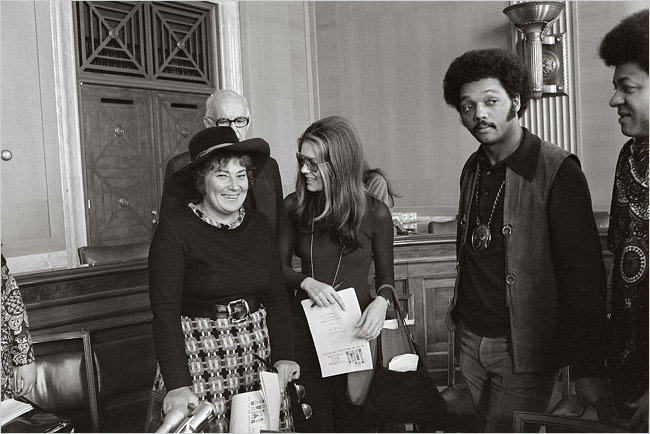