Atlanta        Following the halla bol in India earlier this week where hawkers, peddlers and smaller traders have joined with India FDI Watch Campaign to force more accountability from large big box corporate retail in that country, it may all seem very quaint to read and very “developing nation.”  Many readers must sigh and think, “Surely, they know this is hopeless?”

Often people are surprised we have gone on so long and fought the huge multi-nationals, including Wal-Mart, Tesco, and Carrefour, to a draw in India thus far.  Even some observers in India have argued that they want to “embrace modernization” and have the kind of access, particularly for the middle class, that all of these big box shopping opportunities present.

Maybe, just maybe all of you are wrong though?  I will cite as evidence not the multi-faceted culture and exotic flavors of Delhi or Mumbai, but the experience of the premier city of the world that defines cosmopolitanism and modernity:  New York City!  Furthermore, as witnesses to the rightness of our cause, I will cite none other than the high profile, billionaire Mayor of New York, Michael Bloomberg.  As the coup de grace for good measure, let me mention that the fine New York City Department of Health wants to be on my team as well.

While some forces in India are trying to eliminate hawkers, peddlers and small traders, New York City just successfully increased the number of such peddlers, especially in lower income areas, and they did so for health reasons.  The irony is too rich!  In India the pressure for foreign retail is led by the burgeoning middle class and one argument they make centers on the health standards of food delivery.  In New York the health argument is that there are so many huge areas of the city that have become “food deserts” without access to supermarkets that the city needed to license between 1000 and 1500 traders of fruit and vegetables in order to assure that the health and dietary needs of lower income neighborhoods are met at some level.

There was push back from the small green grocers and the New York program is not tailored to every neighborhood, but it meets a huge need.  When food is only about the top dollar, then this becomes another commodity that will be more plentiful to richer families.  When food is seen as a right and a necessity, then Mayor Bloomberg and ACORN’s India FDI Watch Campaign in two totally different places will be making sure that the right thing happens for the people, not just for corporate profits. 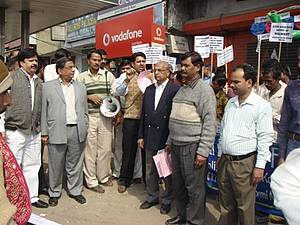 On the heels of the visit of Michael Duke, Vice Chairman of Walmart, hundreds of small shopkeepers and hawkers staged militant protest at the doorsteps of Reliance Fresh, Subhiksha and More in Shakarpur area of Delhi.

New Orleans Harold Ickes, Jr. may seem like the last of a breed, but he has been one of the great political organizers of this generation, usually way, way behind the scenes where what matters is the ability to get things done, rather than how much sugar he can put in everyone’s coffee. From time to time we have worked with Ickes, and even when not doing so have watched his work with admiration and the profound respect that is earned by true professionals. All of this made it fun to read the piece in today’s Times on Ickes’ work for Clinton in trying to lead super delegates into the Clinton corral and then hold them there once lassoed: a wildly hard job for a hard boiled pol!

I’ll spare you the career highlights film. It’s probably enough to say that if you go to this story on-line, the Times reminds you that you can read a piece from their magazine from 1997 on Ickes that they titled: “Bill Clinton’s Garbage Man.” More interestingly to me are a couple of classic quotes in the piece that speak volumes of Ickes value and spark, because only someone who has truly been to the rodeo and knows how to ride and has taken a fall would be so willing to be so categorically frank and forthright, even while maintaining absolute discretion where it matters.

Listen to some of this:

“I mean, I was fired publicly three days after the general election,” he said. “Learned it from The Wall Street Journal. Front page. Upper left hand quarter. You don’t forget that.”Now he finds himself, again and again, answering questions about what he is doing back here, given his history with Mr. Clinton and the obvious burdens of this campaign.”I recognize he has his frailties, as we all do, and some of them are pretty profound,” he said. “You’re wary but you accept it.”

That may be the most accurate summary of the love-hate relationship of the American public with President Clinton that exists.

Here’s another one that speaks dramatically to the life of the organizer:

Every day, he and aides churn through the list of the superdelegates, and he sends a list of names to Mrs. Clinton and Mr. Clinton of Democrats to call.

“They just thought the delegates would be there,” he said. “I remember Bill Clinton talking about how many delegate votes you need to get and he was like, ‘We didn’t have do to that in 1992.’ I said, ‘We sure did Mr. President.’ “

That’s the job! I am obviously not a fan of the role of super delegates in this close contest, but it’s hard to imagine anyone better at this than Ickes, so it won’t be over until it’s really over. 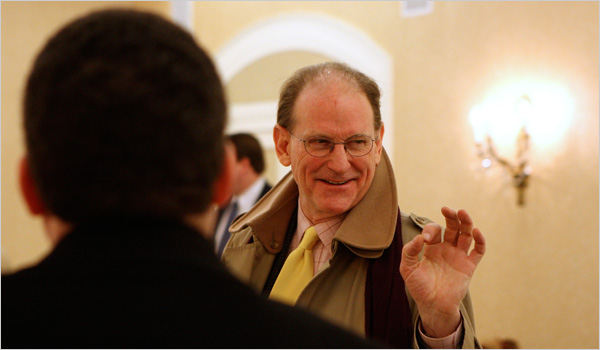 NY Times Caption: Harold M. Ickes is the Assistant to Senator Hillary Rodham Clinton’s Campaign Manager. He helped her husband win in 1996 and was then ousted as deputy chief of staff.