New Orleans     After a grueling process of many meetings over months ACORN leaders and Countrywide executives finally came to an agreement on “best practices” that was not everything we might have hoped for, but was such an advance over the empty promises of the Bush-Paulson initiative that it paled in comparison. Additionally since Countrywide was the largest mortgage lender with about 9 M borrowers under contract of whom about 10% or 900,000 were sub-prime loans, an agreement with them meant significant relief for potentially hundreds of thousands of borrowers. They bargained in good faith and made great progress from where they started and were willing to commit to their agreements in writing, so a benchmark could be established at a higher floor, and we could move from there.

The announcement had been tentatively scheduled several times and then postponed first when rumors roiled Wall Street that Countrywide might go belly up and were then bought by Bank of America, and then later we postponed at the request of B of A so that they could review and support the agreement (which they did in a very strong statement about their historic partnership with ACORN). Third time was the charm though. Google reported that more than 180 news stories ran on the announcement. ACORN offices posted up enthusiastically on solid press coverage in Orlando, Baltimore, Connecticut, DC, Denver, Los Angeles, Pittsburgh, and many places in between.

Interestingly John Taylor of the Community Reinvestment Coalition was quoted on CNN applauding the agreement and noting that he hoped “it would put pressure on Paulson” to improve the weak Bush Administration response. Early teasers about a new Paulson announcement with six banks seem to indicate that they know they are short still, but uncertain how to respond.

It was good to finally have the announcement of the agreement done so we could move from there both to increase the pressure on other servicers and ratchet up the terms to improve the relief to borrowers elsewhere. It looks like many are already feeling the heat. 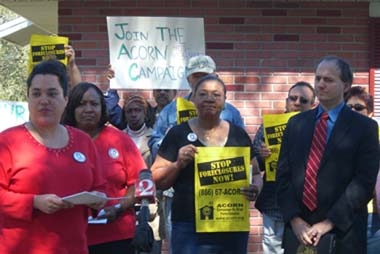