New Orleans     James Orange was on the AFL-CIO Southern Regional staff working with various groups when I was directing the HOTROC organizing campaign, a joint program with ACORN, the Service Employees, HERE, and the Operating Engineers to unite hotel and hospitality workers throughout New Orleans. Ken Johnson, the AFL-CIO’s southern regional director, detached Orange to give us a hand and work the old civil rights networks and groups around New Orleans for a huge march we were putting together around living wages and the rights to organize. He was there when we put 8,000 (the press said more than 10,000) on the streets behind labor and civic leaders including Mayor Marc Morial and AFL-CIO President John Sweeney.

Orange was a big mountain of a man in every way. Tall, lumbering, deep throated, I could tell that he had presence even when I wasn’t sure exactly what he was doing or how. He spoke to an unbroken lineage that went back to the deep heart of the civil rights movement with Dr. Martin Luther King and the Selma March in Alabama. His participation always represented a touch of moral authority that added gravitas to the event. One might almost say that he made his living in churches, particularly among black congregations, telling the story that linked civil rights and labor, and along march routes a thousand times over when workers or rights were challenged.

Orange’s story was one of living in the shadow of his own legend in some ways which is always a rare and difficult path to navigate. The obituary in The Guardian sums his youth up in a nutshell:

A full-time worker with King’s Southern Christian Leadership Conference since his teens, Orange was in charge of civil rights actions in Marion, Alabama, in 1965. He was arrested and imprisoned, and there were fears that he would be lynched. These rumours led to a demonstration in which a young man named Jimmie Lee Jackson was murdered by an Alabama state trooper. Jackson’s death led directly to the decision, taken in Orange’s presence, to stage the famous Selma-to-Montgomery march, which attracted international attention because of the violence shown towards the demonstrators by Alabama state troopers. The outrage prompted President Lyndon Johnson to sign the Voting Rights Act, which extended the franchise to all black adults.

Earlier, in 1963, Orange had joined the so-called "children’s crusade" protest in Birmingham, Alabama, where the willingness of civil rights demonstrators to brave police dogs and water cannon turned what might have been a defeat for King’s movement into a resounding victory. Later, he was active in King’s effort to end housing segregation in Chicago, holding classes in non-violence for a notorious West Side Chicago gang, the Blackstone Rangers. Early in 1968, he was among the leaders of the controversial "poor people’s campaign", when black sharecroppers with mule carts and poor white people from the Appalachian mountains camped in front of the Capitol building in Washington.

Orange went to Memphis with King in the spring of 1968 to support the sanitation workers’ strike. One of his tasks was to deal with the Invaders, a youth gang intent on squeezing protection money from the civil rights movement, and he was present when King was murdered on the balcony of the Lorraine motel on April 4.

Orange passed away this week at the relatively young age of 65. In many ways he did everything too young. To have been at the crossroads of the civil rights movement as a teenager and to have been an organizer in the trenches in his early 20’s has to have been a heady experience in that heroic time. I have often wondered how so many people reconcile these periods of intensity that are so life-defining with the rest of their lives and work. This was a challenge for Orange as well no doubt.

He solved it by soldiering on and defining the movement as alive in a different way in different times. He did not give up or give in. Not everyone can find a role where they can fit. Orange sought his and made his march long and straight in one direction. There’s a huge grace in such a life and work. 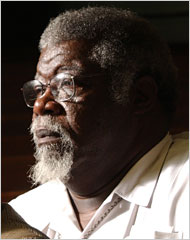