New Orleans     Reports continue to pour in about the power of the Halla Bol, the loud noise, shout-out across the Indian sub-continent. In Kerala in southern India 150,000 people marched and shout down retail trade in protest. S. Babu of India FDI Watch in Bangalore also filed a report of significant activity there.

Total Shut Down and Mammoth Rally of 150,000 Traders in Kerala on Halla Bol

Feb 23, 2008: Traders in Kerala today downed shutters as part of the nation-wide Halla Bol protest against the entry of retail giants into the retail trade. Reports from various parts of the state said the shut down was total. The Kerala Vyapari Vyvasayi Ekopana Samithi (KVVES) and the Kerala State Vyapari Vyvasayi Samithi (KSVVS) had together called for the strike demanding that the Government enact a law to prevent the entry of retail giants. The shut down had support of both the ruling Left Democratic Front (LDF) and the opposition United Democratic Front (UDF) in the state.

More than 150,000 traders marched in Thrissur held a mammoth rally. The speaker of the Kerala Legislative Assembly inaugurated the rally. Many members of parliament and members of Legislative Assemblies were present in the historical rally. Sri Shyam Bihari Mishra, President, Bhartiya Udyog Vyapar Mandal was chief speaker. After the meeting, all the 150,000 people gathered in the meeting lighted candles and pledged to resist the corporate hijack of retail.

Protest marches were also taken out by the KSVVS in different parts of the state. In Thiruvananthapuram, the KSVVS marched to the secretariat. The traders demanded a legislation during the present Assembly session itself. “Now we have thought of approaching the Union Government since the state administration has not heeded our request. Why should corporate entities enter into our retail-trading sector that we have been efficiently managing? Until our demands not to let such big players snatch our livelihood are met, we will carry on our crusade against the entry of Reliance and others,” said Panangottukonam Vijayan, Secretary, Kerala State Vyapari Vyvasai Samithi. The protesters walked to the government secretariat holding banners and shouting slogans against the entry of big retail giants.

The policy of the state government is to see that these retail giants are kept out of the state, Communist Party of India – Marxist (CPI-M) state secretary Pinnarayi Vijayan said at a mammoth gathering of traders in front of Raj Bhavan, the official residence of the Kerala Governor. “The Left is of the firm view that not a single such unit – national or international – be allowed entry into Kerala,” he said. “We at the Left Democratic Front meeting have decided that the local self-governments should not give sanction to such units.”

Only a few days back, Deputy Mayor of Kochi C.K. Mani Shankar had announced opening of retail outlet of the Reliance fresh. But today, Shankar was in the forefront of a protest march in Kochi.

Bangalore 23rd Feb 08,:Street hawkers, retailers and other people joined at Yashawanthpur railway station to protest against corporate retails as a part of national programme of Halla bol. Shouted slogans against the fresh malls. Freedom fighter Mr. Doraiswamy, addressed the gathering and during his speech, said that, already many corporate retail companies have arrived to Bangalore and have started the business but the government is not taking any action to support the local street hawkers, retailers. He requested the mass to continue the struggle to curb the corporate retails and also raised question against police system (because police has threatened the organizers to post pone or cancel the programme and not ready to give the permission for the rally because of Lorry strike. But organizers took firm decision to continue the programme and have done it. Prior to the rally on 22nd of Feb 2008, 3 volunteers along with auto taken to the police station while canvassing the programme. They put under KPA 92(I) act. Police has issued notices to volunteers and today they went to magistrate court and have been fined 250Rs each.) He told that, police should give the support and security for the common people. Most of the police force of country belongs to agriculturist’s family. These companies through contract farming also cheat our farmers. I am here, let the police arrest me first, I am heading this demonstration, let the police arrest. He told that, these are always happens why should go to police and ask their permission. There is no need to ask the permission, we are the people who are protecting democracy and also electing the people to serve the people.

Ex corporator and opposition leader of Bangalore city corporation Mr.D.M. Nanjundappa, one of the guests addressed the gathering and told he will be with the hawkers and retailers of the area whenever needed and suggested the gathering not to bother about police, crores of small traders, retailers and hawkers are depending on this trade for survival. It is our right to protest and give warning to the companies that are demolishing the livelihoods.

During his speech Mr. A.K.Himakar told, if we believe in democracy it is our right to save our livelihood, we are not living in dictators country, irony is that, our people like hawkers, street vendors, retailers are struggling to lead the life where as these corporates are enjoying all the benefits of the government. Whole system of this country is supporting the corporates, what is the alternative left for the people? Government should seriously think on this issue otherwise in near future our hawkers; retailers and traders including farmers are going to hit the corporate stores like uttarpradesh.

Secretary of ASTRA –K, Mr. K.C. Venkatesh also spoke during the programme and told, this programme is national programme, today everywhere in the country our traders, hawkers and vendors are protesting against the corporate high jack of retail. In Kerala, 1lakh people are demonstrating, in Hyderabad, in kolkatta, Indore, Mumbai and all major cities witnessing the demonstarions. Our food security, livelihood, our agriculture is facing serious problems because of the entry of large multinationals in retail and in agriculture if the process continue like this, we don’t know what will happened to our people. We are raising our voices to protect ourselves, our livelihoods are under threat. We are not asking any mercy or any favor from the government. It is our right to protest and we are demanding for national policy on retail.

President of ASTRA –K, Mr. Abdul Hammed addressed the gathering and told, if not today, tomorrow we are going to hit the corporate retails particularly reliance. We made a plan to go in a protest march but the police who should protect us are protecting the companies. Enough is enough in nearby days don’t expect us to follow the rules and regulation and law we are going to break the law let police arrest us. At least we will get food in jail. Retailers, hawkers and traders are under serious crises, does not know what to do, but as a trader I am ready to violent action.

The movement for corporate accountability in big-box retail is still alive and well, and the ACORN-affiliated organization, the India FDI Campaign Watch, is in the thick of it! 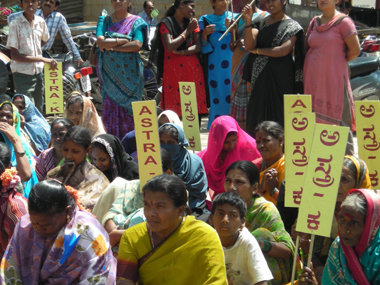 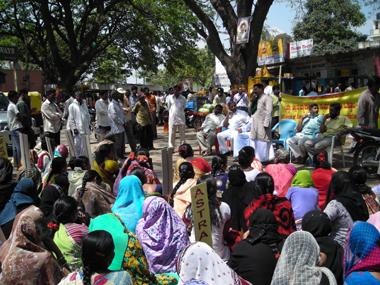 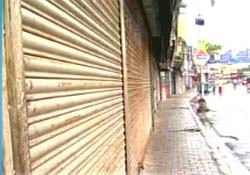