Bogota     The second day of the Congress was better for all of us. We were able to escape the formal declarations and multiple presentations from dignitaries and sponsors, and finally settled into the Organizing Track. For hours we listened and learned intently from case studies given from Cairo, Egypt, our own ACORN-affiliated Harit Recyclers Association of Delhi with our 12000 members, Yucatan, Mexico, Ankara, Turkey, Santiago, Chile, Phenom Phen, Cambodia, La Matanza in the province of Buenos Aires, Argentina, Port Elizabeth, South Africa and Nairobi. The issues they faced were depressingly similar and the strategies too often were also the same from place to place, but that’s a longer story.

After a long day we were finally back in the city center and walking into the lobby of a hotel, everyone was crowded around a large screen television set. President Hugo Chavez in his red shirt was speaking while a crawl headline at the bottom of the screen announced that he was closing the Venezuelan Embassy in Columbia in protest of Columbian troops crossing into Ecuador to kill 17 trainees in a FARC camp along with Reyes, the deputy commander of FARC. He was leading his country in a minute of silence for Reyes.

This morning’s report on BBC saw both Ecuadorian President Raphael Correa announcing that he had mobilized troops to their northern border with Columbia as well as the deputy foreign minister of Columbia issuing a formal apology to Ecuador. They were sorry. They were chasing terrorists in a Bush-like world. They were more comfortable apologizing than asking for permission. They were also clearly ignoring Chavez.

Troops are everywhere in Bogota. This is part of the federal program and the government’s popularity in giving more security. I ran before dawn. Jogging into the main square surrounded by all of the old colonial government buildings, one of the soldiers said "buenos dias" and I replied in kind. This was not news here. Just another day in Bogota amid the isolation it faces with many of its Andean neighbors.

It is hard to feel easy about this part of the world. 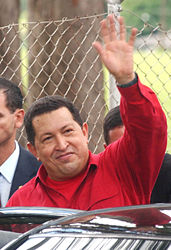