New Orleans        Landing back in Atlanta last night from Bogota all of us were on standby trying to get through the rain and get home were glued to CNN reports on the vote in Vermont, Ohio, and Texas.  Obama extended his streak of victories with Vermont, and Clinton came back with a solid win in Ohio and a squeaker in Texas.  Mi companera watched the speeches by the candidates.  Clinton by her report was excellent!  Obama though was magisterial from San Antonio.

My question is simple though at this point.  When is it time to make a deal?  To save the Democratic Party?  To actually see if the White House can be won?  To lead the country to the future?

Despite the heartbeat in the Clinton campaign, Obama is right that the results last night hardly moved the needle.  His lead remains solid and since Clinton did not achieve a blowout, the delegate count really did not materially change.  Even if Clinton is picking up some speed, she is running out of road it seems.

So what does it take to make a deal?  Why not make history in two ways?  Why not an Obama for President, Clinton for Vice-President ticket?  Why not put the future forward with the legacy of the past?  Why not advance both the first African-American to a new place and the first woman to a higher rung?

A new Senator from New York might not be as good as Clinton, but would be very good.  The country would not lose there.

And, yes, we all know about the job of Vice-President and the problem of being number two, but Cheney has shown that the job can be a huge power base.  Clinton is running a campaign partially rooted in how much clout she had as First Lady.  Please do not tell me that Vice-President, where you actually have a REAL seat at the table, is not a better job than that.

But it’s time for these grey beards, super delegates, and big whoops to start finding a way to make peace before we find not a choice or an echo but a spectacle where McCain runs on one side and chaos, dissension, and confusion runs on the other.  If President Clinton were not so conflicted here, this would be his role.   Unclear that Carter or Edwards or Mondale or Gore have the clout, but the conversation needs to start happening and the outline of a potential deal needs to emerge, and now is the time before Pennsylvania rips all the sheets. 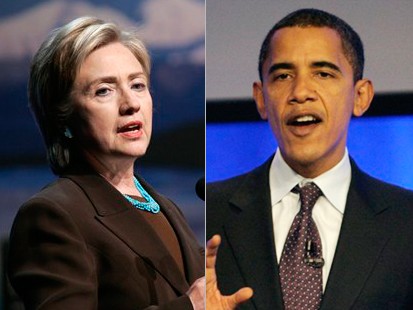