Minneapolis      The day kicked off for the Association Board with an action joining Minnesota ACORN members at the trashed out and abandoned Governor’s Mansion in St. Paul, demanding the Governor sign the foreclosure protection bill we had helped pass in the legislature. No sooner than the board was tucking into some famous spaghetti and meatballs made by ACORN Treasurer Paul Satriano, the reports of progress in recent months and years started coming in hard and fast.

First, Minnesota Secretary of State Mark Ritchie, a long time organizing colleague from the nonprofit sector, addressed the Board and told the story not only of his partnership with ACORN in Minnesota and nationally in deciding to run for this seat, but also of the work he has done with us on our key issue of Election Protection. He was quickly followed by the intense, sparkplug of an Attorney General in Minnesota Lori Swanson, who has been our friend and colleague on one fight after another around predatory lending and other issues. She even thanked the board for letting her “steal” one of our former organizers on her staff. This was a heckuva welcome to Minnesota, and the board loved it!

After months of work that culminated first with the signing of the ACORN-Countrywide Agreement on Best Servicing Practices, teams of staff and leaders from ACORN and ACORN Housing have continued to press the companies to duplicate or improve on that agreement. In a surprising last minute breakthrough literally a day before the Board meeting, Citi finally came up with the language to meet our demands by particularly improving affordability standards for modifications which sets a great benchmark in this new agreement among other items. Mike Shea and Alton Bennett from ACORN Housing, which led this team, took excited questions from the board members for almost an hour! The Board reviewed the draft and approved subject to final discussions to close out all outstanding questions on coverage and terms. HSBC also appears finally ready to announce great standards for income left in the home after modifications with us in Phoenix (we hope!) the first Saturday in May.

Sharon Sayles Belton, who heads the negotiating team from GMAC, and is the former Mayor of Minneapolis, made a presentation to the board about the progress in the ACORN-GMAC negotiations. Both parties indicated their disappointment at not being able to announce a final agreement yet, but indicated they were close. Under determined questioning from the Board, particularly the delegates from Michigan, Sharon Belton committed to bringing the agreement to a close in 30 days! There was excitement that companies are continuing to come in line.

Not everyone it seems. WAMU was approved for the target list, and the board looked carefully at rankings that showed how far GMAC needed to move to get into shape and how much farther a lot of companies needed to move to make the mark.

But that’s accountability and the ACORN leadership is good at that! 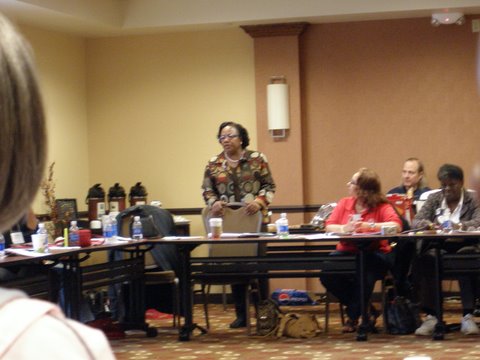 Sharon Sayles- Belton, GMAC reporting on progress of negotiations.
Secretary of State March Ritchie talked to Zach Polett, ACORN Political Director, after speaking to Board about election protection.
Attorney General Lori Swanson speaking to the board about predatory lending. 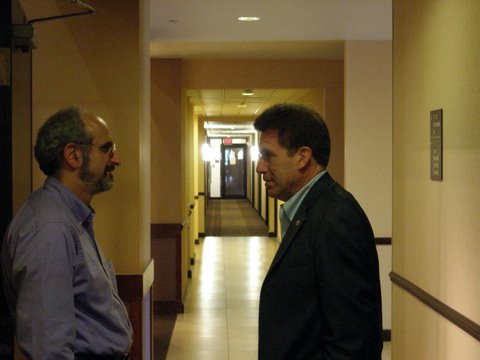 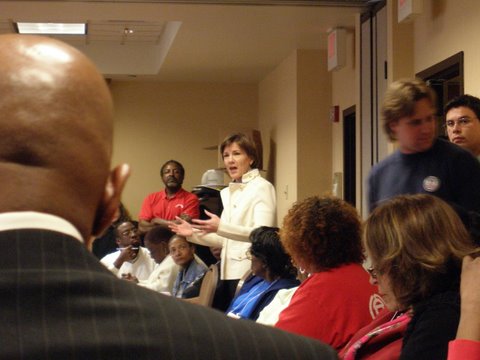