San Francisco        In one of the final, powerful sets of Tides Momentum presentations a woman named Mary Anne Hitt, the executive director of Appalachian Voices, spoke about “mountain top removal” or what coal mountain removal and the destruction of 450 mountains in Virginia, Tennessee, and Kentucky.  There was a standing ovation from the crowd.

What she had to say was dramatic, but what moved people really was the presentation that had been done with the assistance of tools from Google Earth and Google Maps and they were so powerful that everyone could see every bit of it.  Google had even allowed them to build reconstructions of some of the mountains.  They had created a “memorial” of each of these mountains.

Another piece she could do with a wave of the curser was show that utility consumption in San Francisco was related to coal mining in a specific area in West Virginia.  The very connectedness of all of these pieces to a web of mining and mountain removal made the distance shrink so that people in the crowd who had never imagined being in Appalachia could feel responsible for exactly what was happening there.  That’s powerful!

She had one “trick” she did that show the size of a mountain top being removed and then juxtaposed over the map of the City of San Francisco so that people could see the scale of what was being done.  It made me think that the same thing could be done for ACORN International in overlaying the size of mega-slums where we organize like San Juan Larigancho or Dharvi or wherever against the scale of US cities to bring the same point home.

This woman was proving that some of these tools could be powerful weapons for social change, and it made me start to think about what we need to do to get our game up to a higher level to make the same points as powerfully for our members all around the world. 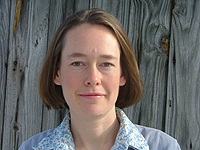