New Orleans        Something very exciting seems to be happening in this presidential race.  The fact that the McCain campaign refers Obama as “the One” just about says it all.

Seeing the pictures on television and the newspapers of the crowds that listened to Obama speak in Berlin were amazing.  German police estimate that 200,000 or more Germans came out to hear him on what looked like a gorgeous summer day.

The Times said that governments and diplomats were less enthusiastic.  No huh!  Who cares?

Can you remember the last time an American who didn’t have a microphone in one hand and a guitar in another drew 200,000 people anywhere in Europe?  And, that would have been as part of a festival where they were serving beer at the least.

For 200,000 people to come out and hear a candidate for President is an amazing phenomenon.  It makes me think that there is an excitement — and hope — around the world that America as the world’s leader, might actually be a leader and have a leader that the world is willing to respect and hear differently.

For the last 8 years I have taken no trip anywhere outside of the US where I did not listen to everyone from taxi drivers to shopkeepers to our members and leaders ask me what was the problem with Bush.  It would be refreshing to find America standing once again for hope, opportunity, and even justice in the world again.

There will always be people to sort out the commercial issues and there are certainly real issues between countries that need attention, but for a minute just reflect on how much easier it could be to handle hard issues and US interests if we had a leader that citizens of other countries actually respected and felt was a man of peace and integrity.  Behind the applause of hundreds of thousands around the world, I can almost already hear the sigh of relief. 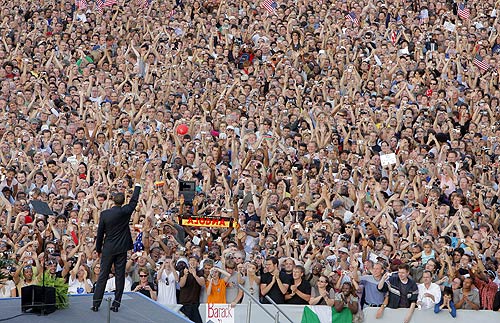 the crowd for Obama’s speech in Berlin