Ottawa        There are some times when it seems there is nothing one can really say that seems right exactly, and the sudden, terrible and hard fall of former Senator, Vice-Presidential candidate, and more recently Presidential candidate, John Edwards, seems just such a situation.   Walking through the building in the few days I was in New Orleans, calls were still coming in from various news outlets in the Carolinas and elsewhere to Charles Jackson, ACORN’s Communications Director.  When the piece broke on Friday, the footage that ran on CBS was Edwards at an ACORN event, both branded clearly and well.  A look at the ACORN home page on the website still offers a chance for members and others to hear Edwards’s speech at the ACORN Convention in Detroit almost two months ago.

We were Edwards’s allies without amendment or reservation.  He had been with us on all of the state minimum wage elections — and victories — in Ohio, Arizona, Colorado, and Missouri flying from state to state with ACORN President Maude Hurd during the campaign.  He had stood with us in New Orleans on Katrina rebuilding.  ACORN staff and leaders were there in the 9th ward when he announced that he was running and when he announced that he was through.  I had shaken his hand and visited with him about New Orleans and international work in San Francisco the day before he was in Los Angeles, and….

I can remember ACORN’s Treasurer from Minnesota just about biting his lip when the recommendation was made to endorse Barak Obama and saying he was an “Edwards man” and wasn’t ready yet, even when it was clear the race was done.  Orell Fitzsimmons, who runs SEIU Local 100’s field operations from Houston, is still not sure he needs to take off all three of the Edwards stickers on his car.  Edwards got half of the votes from my family, even after he dropped out of the race, because, well, he stood for something that seemed damn close to what we all stand for.

Someone in the office the other day said, “I wish we were more European in how we handled all of this,” and maybe she was right, but we aren’t, and Edwards was as sharp as they come and had huge political skills, and darned if he didn’t know it, especially coming from North Carolina.  He may have gotten in trouble in a New York bar, but he knew that was not where any of the two Americas really lived when it comes to this kind of thing.  He and Elizabeth Edwards, his wife and partner, also knew what an asset she was to his image, his narrative, and appeal.  A huge rule of political life is to not damage the asset, and he did, and he knew he was wrong, stupid, and reckless.  Worse, everything one reads about this other woman is just past the pale.  Even as you are wishing at least that she be some Mata Hari and tell me he was drugged, all you find is this former New York party girl and full-time wannabe and groupie. Ugh.  Like the country and western song says, “What was he thinking?”

He has resigned from the University of North Carolina poverty center he headed.  He was the Chairman of the “Half in 10” effort that ACORN and several other major national organizations had sponsored to cut the poverty rate in half in 10 years.  If he has not stepped out of that yet, he will soon undoubtedly.  So what does John Edwards do now?

In my view this is an interesting test of character and the man.  If he is really committed to doing something important on things he has said he cares about like reducing poverty in the US and around the world and rebuilding New Orleans, then there is nothing stopping him one minute from continuing to do just that.   I overhead someone in the New Orleans ACORN office say, “We’ve near refused help from anyone, why would we not work with everyone, especially an old friend?”  I’m sure the same might be said by any of the billions of people around the world hoping without any real expectations to see the end of the poverty that oppresses them daily.

Edwards has resources and skills.  If he still stands for something, then there is a huge amount that can be done and is being done on these issues every day.  The real work is not on the front pages or with television cameras panning the crowds, but in the vineyards every day with real people facing real problems and winning against the odds.  Admittedly, it’s another road, but it’s a road that needs to be travelled by lots of people to make a difference.  There’s room for John Edwards in this work, warts and all, and if what he has said all of these years is what he really means and believes and I think it is, then speaking at least for me, I will look forward to working with him again in the future, and will thank him for his help.

In the fight against poverty and for justice, we still do not believe that someone has to be perfect.  Being good and doing good still works for us. 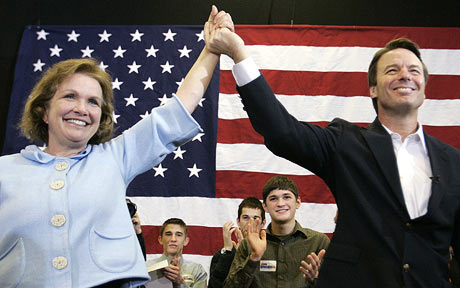