Buenos Aires        As Katrina moved through the Gulf towards New Orleans, I was in a hotel room a mile above sea-level in Denver at a management council meeting that all seemed unreal as the storm hit the city.  Now, I am almost 6000 miles south in another continent, and it is equally unreal.

The storm seems to be trending away from the city at this point and more to the southwest between Morgan City and Lake Charles.  Hurricane Rita hit Lake Charles hard in the Katrina-time so there would be nothing fair about another beating for that still broken city as well.

Tracking the hurricane through the weather service and the local newspaper is mind bending, since for all of the computer models, as they freely admit, the models are outdated as soon as they are finished.  You go with what you have though and hope for the best.

Reports from the office are all Katrina driven.  Those that made it through Katrina break cleanly in two directions.  The ones who were trapped are getting prepared earlier.  The ones that see their experience like an additional star on a veteran’s uniform are a little cooler and more wait and see, measuring the risk and the route as if they had been New Orleanians for decades.  The new people are caught between the two without a clue.  Not having been in the city in 2005, they want to be ready, but are hardly sure for what and how to move forward and when.  Mainly everyone is very nervous.  We need Gustav to die down or move around the city, because we are no more prepared today in most areas to withstand another Category 3 or higher blow than we were at Katrina.  A note recently mentioned that only four levees were stronger now than there were at Katrina meaning another close to a dozen or more are the same or still weaker.

In a new version of “wrong-way-wade,” I will be flying into the city while some begin to evacuate on Sunday out of the city.  My plane from leaves Buenos Aires on Saturday afternoon for a short hop to Santiago and then an overnighter into Houston and an early morning flight into Louis Armstrong International Airport finally ending 2 1/2 weeks on the road.  For a change I’m just glad to be home to help rather than in Denver or someplace else leaving the burden on everyone else.  My plan is simple.  Go home.  Wash clothes.  Re-pack.  Pick up old newspapers. Batten down the hatches.  Move the generator to the back porch for when we come home.  Pull everything else into the shed.  Nail boards over the shutters.  Move the plants.  Call my mother and brother and see how they are progressing.  The usual drill. Load up the big Suburban truck that everyone scorns until something like this, and then I watch envy fills their eyes as I move out loaded up with 2 feet or more of clearance and 4-wheel drive, and I’m ready.   The family will gather with friends and others without cars or simply first-timers that have been picked up in our web.  Someone will need to wash Cheyenne, our Australian cattle dog who will be excited to be part of the road crew and that something is going to break and shake the boredom of her day.

All of the while, I will be wondering as I am wonder now, whether or not we have learned anything fundamentally important since Katrina about how to care for people and not just property.  I will hope we don’t have to find out yet, because I think I know the answer.

And, then I will go back inside the house, turn on my shortwave radio, make a cup of coffee with chicory, and wait until consensus finally shapes and a direction is set and the boss has finally spoken, and then we will pull ’em up, roll ’em out, rawhide! 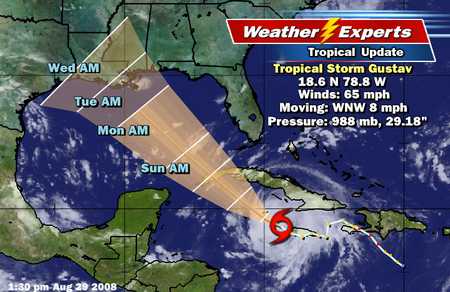