Buenos Aires               On my last subte run from the office on this trip I must timed it well. I hit the Catedral stop on minutes after 7 Pm, but I was able to get an easy seat in the surprisingly light Friday rush.  Some students got on in groups.  They had been marching downtown protesting the lack of money for them to have scholarships after high school.  Police were everywhere dealing with teacher strikers who had gone out on a pay dispute.  It was a gorgeous, sunny day that had shown warmly on all marchers.

Several stops before mine at the end of the line, a large dog ran along on to the subte and down the aisle from car to car.  The portenos simply smiled and watched where it might be going.  There was no comment or effort to shoo it off at that station.  I shook my head at the portenos soft spot for dogs and whatever they do that is simply amazing.  When I walk Ercilia’s dog, Marroc, on the leash many seem to marvel that he is not running wild as so many others.  I won’t even comment on the early morning ritual of building maintenance staff hosing and mopping the sidewalks since the evidence of dog is great and numerous everywhere.  There are always two easy tips for knowing a native porteno anywhere in the world:  one is the different Spanish accent and the other is that they will always have poop on their shoe soles no matter where they are.

That I always knew, but there are other things I noticed this trip.

Daily garbage pickup for one.  There cannot be many cities of any size, especially the size of Buenos Aires where there is daily garbage pickup, and it is taken for granted as part of the sense of entitlement, like cheap collectivo buses and the subte itself.

Or cigarettes.  Huge numbers of people still smoke and the price is hardly more than $1.25 or so in US dollars, which other smokers can probably hardly remember, it was so last century, but the government clearly chooses not to levy much if any taxes on cigarettes for bizarre reasons.

Or the right to protest, which has to be admired.  Walking by a building entry in this apartment-centric city, there were a dozen people standing in the entry way and sitting on the stairs and it was clearly a meeting of the residents to discuss issues with the “administration” of the building.  There had been a sign in our elevator calling a meeting for next week.  There is distrust about the increase in the common electricity bills being passed through.  The demand is everywhere for a full accounting and to see the bills!

Or the last ride free on the subte.   Strangely to me, the subte, unlike the collectivos does not run all night long, but shuts down at 11 PM.  In a novel entitlement though the last ride is free so people literally walk around, if they are close to the 10:45 time period, so that they can hit the time correctly for the last free ride.  I like to think that the policy was put in place in response to porteno parents protesting to the city that had to have at least something to work with to try and bring their children home before midnight, but I bet I’m making that up.

Staying up late, waking up whenever, long haired men, and women with their own fashion flair, eating after 9 or 10, the parks, and so many other things make Buenos Aires a wonderful living experience, and that seems to be a portenos entitlement as well.  I need to go home while I still can! 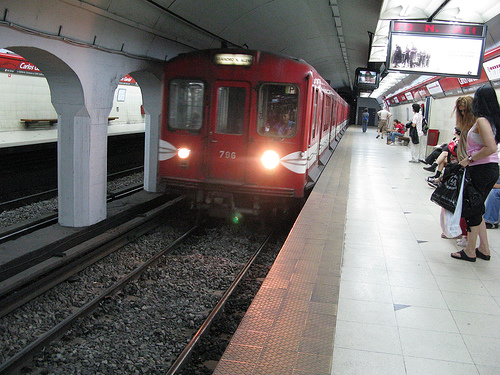