New Orleans        Yesterday’s blog talked about two problems with getting emergency food stamps to people in the humanitarian crisis that is represented by a mandatory — and potentially necessary and lifesaving — evacuation in the face of a hurricane.  Today I would like to add something to this theme and pile on in another direction as well.

Once someone qualifies for emergency food stamps in this desperate situation, then you would think that they would walk away with the ability to actually buy some food, but you would of course be totally wrong about that as well.  You get a card, but it actually takes 72-hours to load the card, and that’s ridiculous.

Of course in Bush-world the card is loaded by a private contractor and of course in this same FEMA-way or no-way at all, the card loader was given all of the time in the world, but in the modern economy where automatic transfers, debit payments, and so forth, it is absurd to think that a working stiff or low income family that needs food now has to wait for 3 days to get food.   There was a story in the Times-Picayune where a fellow was quoted saying he had to borrow $20 bucks from a friend for a pound of luncheon meat and so forth to try to make it a couple of days until the card was loaded.  There really is no excuse for such delays.  Others do it faster, and nothing should be faster than getting money to people for food!

In post-Katrina world one thing that ACORN was able to do because we had the relationships and there was an understanding by lenders including Fannie Mae and Freddie Mac that could help set the tone, was get forbearance on home mortgage payments so that people in disaster zones had a couple of months and in many cases even more time to get their lives and money together so they could make their mortgage payments.  Some credit card companies also allowed a grace period after Katrina so that people could catch up with the bills.

This should be policy and program for all obligations.

Someone with a job in New Orleans working in the hospitality or health care or general service industries often does not have any cushion economically.  There is no “wealth” or savings to back them up because they are living from paycheck to paycheck.

When forced to evacuate they had to go deep and spend rent money, phone money, utility money, money they were holding for a car payment, and in short any money that was anywhere they could put their hands on it.   When hit for $350 to $1000 in sudden mandatory evacuation money, they need some grace for a month or two to get back on their feet.  This should be a requirement enshrined in law and part of the FEMA package.

The opposite seems to be the case.

FEMA has created a world of confusion in the post-Gustav period around whether or not they would pay for hotels where people were trapped on the evacuation.  Many thought they had heard FEMA officials approve this.  Now in the backsliding since the storm, it seems that this is only possible if their house was damaged or destroyed, but, hey, that’s too late, the money is already long gone.

A story ran today of a woman who works at a day care center.  She makes more than minimum wage, but only about $15,000 per year.  Too much for food stamps normally, but not enough for savings.  She was lucky; she was able to stay with a former sister-in-law near Texas so it only cost her $350 to flee the storm.  She will eventually get the emergency food stamps.  But, she was able to get to Texas because she had a car.  Now, she spent her car payment running from the storm.  She says that the will stay in New Orleans or go to a shelter next time.  She can’t afford anything else.

Oh, and she is thinking she will just have to lose the car and let it go back to the lender.

Is this a program that works? 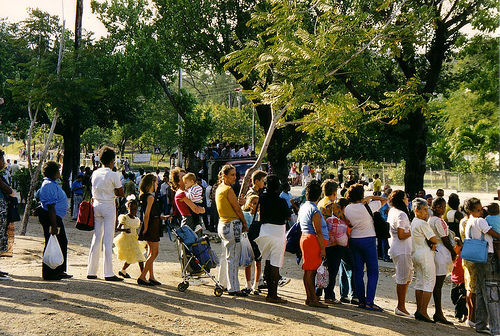