Don’t Blame Hispanic Homeowners
New Orleans               There was an incredible and irresponsible article in the Wall Street Journal yesterday by Susan Schmidt and Maurice Tamman called “Housing Push for Hispanics Spawns Wave of Foreclosure” in which once again there is an effort to blame the folks at the bottom for the mistakes at the top.  Perhaps worse, the conclusions from the statistics the Journal uses to excuse its business base instead make the case for a huge advance in citizen wealth for Hispanic families.  What in the world could be wrong with that?

Here are the facts the reporters shared:

*        There was a huge 47% increase in home ownership for Hispanics in the USA in a seven-year period from 2000-2007 that saw 2 million Hispanic families become new homeowners in that period and the total numbers of Hispanic homeowners go from 4.1 million to 6.1 million.

The only proper response to that fact is:  WOW!  Since there are very few tools as powerful as homeownership for increasing citizen wealth, this is a huge advance on all fronts.  It is also worth noting (though the article was silent on this score) that a significant percentage of this increase lies in the utilization of ITIN loans, so called because they did not require citizenship in order to move to home ownership.

That stat is the core of their accusation, so let’s look at it carefully.  Ok, the foreclosure rate in such counties is 50% higher than in counties where Hispanics are a smaller percentage of the population.  So what?

Remember as well that the foreclosure estimates now range past 5,000,000 homes.  Lot of everybody losing homes, and it certainly does not seem inordinately Hispanic when you look at the numbers without bias.

Let’s even say that the foreclosure rate is 10% for new Hispanic homeowners during this upsurge period that disturbs the Journal.  Then 200,000 homes would be lost, and that is a worse tragedy.  But, still 1.8 million are hanging on to their homes, and 200K is a drop in the bucket on 5M+ foreclosures.  Whatever they were doing, let’s do some more of that!

As always in the Journal while trying to play the blame game they also passed by the timber looking for the mote in another’s eye.  The reporters blithely offer the fact that of these new Hispanic mortgages 169% were in risky subprime products while only 29% were in regular mortgages.  Hola!!!  Pull a sample and see how many of that 169% might have qualified for cheaper and better mortgages (albeit with smaller payouts to brokers and mortgage companies!).  They also take a shot at “stated income” loans and the horror for families finding out in English late in game what some of the unscrupulous brokers said was their income and what the grasping lenders chose to believe.

There are victims and there are perpetrators in this mess, and eventually the Journal and many others are going to have to stop pointing a finger at the homeowners, Hispanic or not, who were desperate to own a home and advance their citizen wealth, and focus instead on the hucksters and sharpies running the businesses both in the community and on Wall Street. 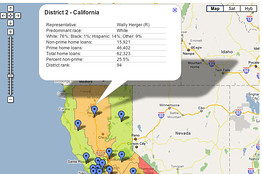