London My dad when he was alive would press me on my travels for the odd bits and pieces that stuck to the mind as unique or different from my far flung travels to organize, so in the transition and 30 hours of airport and flying time from Nairobi to New Orleans, I found myself thinking about the stories that would interest him were I to see him on Sunday night when we would always visit my parents when I was home.  A couple of things stood out.

Valentines is quite the deal in Nairobi.  It’s not about candy and cards though, but wearing red and giving roses.  On my way out to appointments on Saturday morning there were no jams yet in the roads but along the road ways people seemed to be wearing a lot of red:  red t-shirts, red scarves, red shirts, or something red somewhere.  Coming back on the same “short cuts,” which is what every taxi driver in Nairobi calls whatever route he is taking that doesn’t involving driving right through the center of the city along Uhuru Park and the stifling traffic roundabouts there, we were crawling along in one jam after another.  The best we could figure this was caused by the huge traffic in hawkers who were selling roses in the middle and alongside the roads everywhere in the city.  Bright red roses are another central Nairobi Valentine tradition, possibly driven in no small part by the extensive flower growing and transportation industry in Kenya directed at Europe.  People were quite festive and cheered by the whole Valentines affair and people one after another throughout the day would kid me about all the red I was wearing was in my hair.

The other odd piece I’ll share involves the fairly brand new Terminal 5 at Heathrow that specializes in the international flights.  Heathrow in recent years has been a dread if you were forced to transfer through there.  It was a maze and a trek, and worse, for a good while the two (2) carryon policy from the US was changed in mid-transfer at Heathrow to a one (1) carryon program in an elaborate and maddening re-screening process which was a disaster.  (My only worse experience in such screening was several years ago in South Africa where one of the screeners tried to get me to pay a bribe to get my bad out of the xray screening machine!)  So, anything admittedly might be an improvement.  The architecture is ok in the standard way of airport architecture these days (not having been to the new Beijing Airport which may set a new benchmark) following the lead of  the United Terminal at Chicago O’Hare which is widely heralded as the most pleasing and structurally appropriate of the modern concourses.  Terminal 5 is nice in that industrial, modern way.  There was obviously a requirement, this being Heathrow after all, that they deliberately confuse you as you transfer by making you think you can go straight to the B and C concourses — which you really can’t — rather than simply going underground, taking the train to A, and then if you find yourself flying from B or C, going right back down again and re-entering the train.  Why?  God knows.

But, the one absolutely wild, best-in-class improvement has to do with security screening.  First, there is none of this peculiar separating of computers from the rest of the bags or taking off your shoes.  Terminal 5 has real x-ray screening that can in fact identify computers and check out shoes, and that is unique as simple as it sounds compared to the rest of the world.  (There are some other airports around the world which will go unnamed here like the ones in Africa, where you also don’t bother to separate computers or take off shoes, but one suspects that it has less to do with computers than it does with certain nonchalance in these matters.)

There is a very efficient conveyer belt which returns fresh, empty trays to knee-level.  A traveler picks out her trays, loads them with their gear, and starts them rolling with the help of a screener into the bowels of the x-ray equipment, and they churn out quickly on the other side.  In fact so quickly that no daydreaming or dressing is allowed or a traveler will not recover their gear from the tray, and it will be on its way back again on the conveyor belt.  The whole process was quick, easy, and painless. 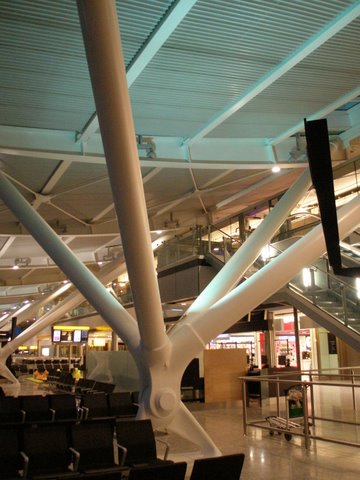 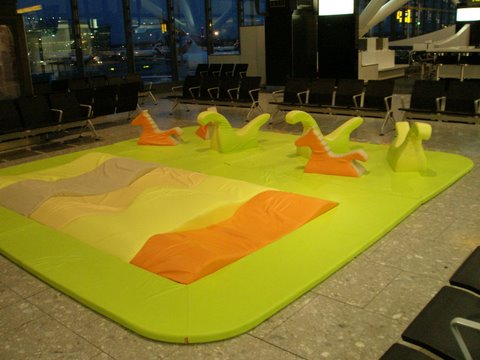 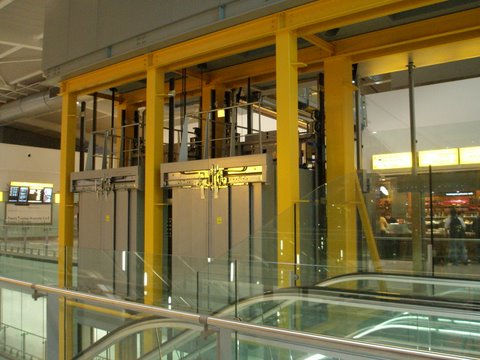 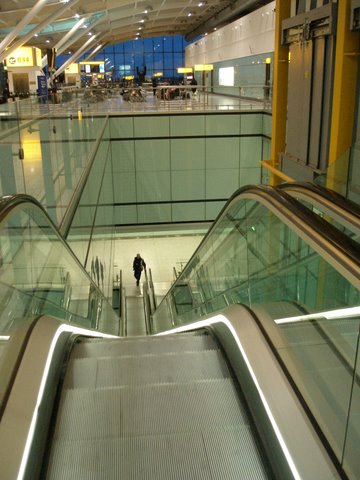 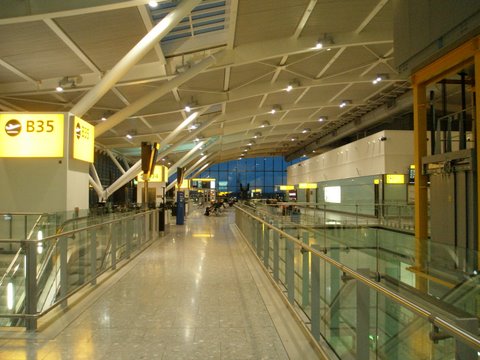