Nairobi On my last day of this Nairobi trip I was honored to be the guest of a fascinating organization that I have written about before over the years, COPA-K — Community Organizing Practitioners Association of Kenya.  This is that rarity in the world — a professional association of organizers.  There are about 80 members.  They pay dues and do some training with each other during the year.  The organization acts more like a professional society than a trade union.  They network.  They keep each other informed, and they move from project to project, NGO to NGO, trying to keep the work alive.  On this Saturday morning I was the guest speaker and the draw on their agenda, but for me it was an opportunity to dialogue about how organizing is developing and ACORN International’s plans in Nairobi.

I was also interviewing organizers.  In the year long delay in developing ACORN International’s organizing project in Nairobi, we had decided in the wake of the instability and violence in the settlements that we needed to approach the early organizing differently than we have normally done.  Rather than go with our original plan of hiring relatively inexperienced but promising individuals, training them, and then moving forward, we had instead reached out to COPA-K as a partner along with some other organizations to identify candidates to work in the ACORN International startup who had at least five (5) years of experience in community work, who we could then retrain in our methodology, but who we at least knew would be comfortable in the settlements and have the “street” skills to survive.  We also wanted to make sure that we hired organizers with different tribal affiliations and language skills so that we could be sensitive to these issues, particularly among the Kikuyu and Luo, as the dominant groups in the settlements.

We had a fascinating dialogue.  In one of those interesting coincidence all of the organizers I met were between 39 and 41 years old.  They were all well versed in the terminology of organizing, so there was bantering back and forth about “gatekeepers,” “community leaders,” and mobilizations.  None of the organizers were really working as organizers for mass-based organizations.  As Lawrence Apiyo mentioned during the discussion, a lot of organizers have been trained and spent years in the field, but are “project organizers following the donors, rather than real practitioners of community organizing.” So even with 10, 12, and 16 years of experience in the room, it became clear that the luxury that I have enjoyed in being able to actually work in service of a membership and community organizations over the last 41 years of my career has been a rare gift.

These professional organizers all felt that violence in the settlements was only inches below the surface and given the lack of a real operating, central government was almost bound to explode unless there became a real government with majority support.  They were largely disdainful of shared power arrangement of the central government because they believed the illegitimacy of the elections in late 2007 had still not been resolved, which left the ministers and MP’s operating on their own without popular support.  I was fascinated at how engaged they were in our discussion about politics.  They were all up to date with news of the minute.  These were organizers who were paying attention to politics.  I asked them how deeply the political interest sunk down into the settlements.  As one they assured me that early in the morning in each of the slums where I had been I would have seen crowds gathered around reading the papers out for sale and display and talking about politics.  Yet, when I asked, if the organizations they had built were similarly engaged in converting power via political action, I was still speaking a heresy that didn’t match with the training they had had in the old ideology of organizing.  When I pointed it out, they got excited.  The notion that a membership based organization could be fully engaged in current events was a revelation!

There’s hope, but much to do and learn from each other.  I will enjoy these partnerships, and together we will raise up the practice of organizing in Kenya, and that is worth something in and of itself. 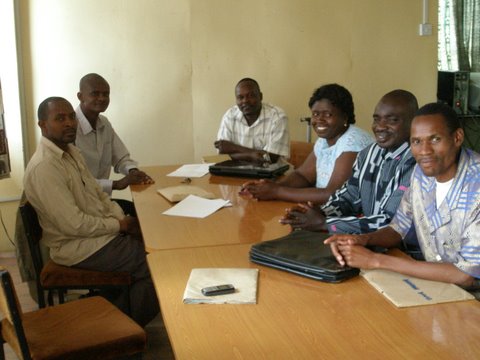