Boston        I popped my head in for a minute to hear the distinguished panel speak of new takes on urban renewal.  It was fascinating in bits and pieces, but seemed to also underscore how little real attention revitalization of urban areas has gotten in recent decades as a matter of public policy or public investment.
Professor Barry Bluestone, who has looked at deindustrialization in a thoughtful way for years, spoke to part of this problem.  The standard argument for cities diversifying job base was made, but there’s no magic wand there and as we all know it is every city mayor’s dream, but there is no reliable pattern book to set and duplicate, and Bluestone said as much.  Surprisingly there were expressions of nostalgia for the American manufacturing prowess of a bygone day when, as other panelist said, “we made stuff,” but little specifics on what we could competitively make that fit the old tool and die crafts.  Outside of servicing our own huge domestic markets, most argue along the line of Joel Rogers and COWS that we need to look at specialized, high end, high touch, high skilled work that we can retain and develop, but that’s not easy either.
Ironically, Bluestone also spoke of his experience working on the Mustang assembly line and took some swipes at the auto industry, Saturn, and the junky cards we produce, which seemed hollow when one thinks of his father’s contribution to the UAW and the labor surge of the 30’s and the hundreds of thousands of jobs and lost communities from this deindustrialization.   And, to tell the truth I remember the Mustang fondly and don’t recall the kinds of carburetor problems he mentioned?  Another speaker answered a question about Toledo that asked about the impact of a new labor movement, and surprisingly did not mention the fact that Toledo for years has had the highest unionization density of any American city and cited examples of building trades recruitment and training as examples of resurgence, which does not ring true, but spoken with such sincerity seemed to satisfy this audience.
Some of the experts talked about using arts to revitalize, and it was fascinating to listen to one of the panelists involved with the wildly controversial, vanity project represented by the de Young museum, a perfect example of arrogance of the superrich, skate around the issues of low income family displacement in San Francisco and the inability to prioritize affordable housing for anyone.  It was unclear from any of these remarks how an “arts” district could effectively operate in any but the richest and most “executive” cities, but these are hardly the ones clamoring for “revitalization.”
Bluestone was spot on the mark here though and cited powerful and fascinating data in the Boston area indicating that population was capped out and declining in the city despite all of the jobs, culture, and fascination on the hard knife of exorbitant housing costs.  Obviously, having made that argument now for years, it was hard not to applaud its confirmation!
Dr. Janice Perlman, who I remembered from a study she did 30 years ago and a visit to my office in Little Rock at the time when she was plotting the impact of community organizations, is involved with a new project focusing on mega-cities.  She made the case to my joy about the errors of NGO’s and governments obsessively funding rural development while the cities are burgeoning and experiencing little of the same support even though so many of them represent the future on the planet.  I caught her for a minute and she indicated she has staff in all of the ten largest cities, many of which overlap with ACORN International, so perhaps there is something that might come from that.
The queue of students asking questions of the panel was similar to all of the other plenary events of EPIIC.  The questions were almost always better than the answers, because they were often simply deeper and not infrequently unanswerable.  The students and all of those folks associated with this colloquium have huge reasons to feel amazing pride at what they accomplish so seamlessly.  Sherman Teichman, the program’s director, mentioned the night before that next year would be the 25th time they have organized such a program.  What a record of accomplishment! 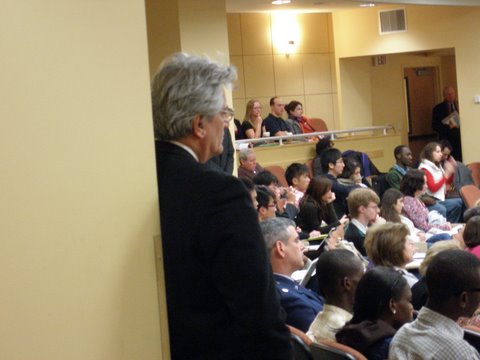 Sherman Teichman, Director of the Institute of Global Leadership