Boston        On Friday night the panel at the EPIIC International Symposium convened to discuss the issues of particularly vulnerable global cities and New Orleans was highlighted as a worse case example of the impact and consequence of vulnerability.  It was encouraging to find that after more than three years, there is still deep interest in the fate and fortune of New Orleans and the good will is deeply appreciated by all of us who live there or care about the city.
The debate of many of my fellow panel members though focused on the impacts of climate change and whether this was increasing the vulnerability of New Orleans and other “coastal” cities.  One visitor from the London School of Economics almost seemed to still deny the real impact of climate change and whether or not it was a policy consideration, which was amazing in its own way.  He was soundly rebutted by a Tufts Fletcher School professor and head of an environmental institute on, William Moomaw, who showed some slides of what flooding in the wealthy, old Back Bay area of Boston would look like in a 500 year storm from a northeaster.  [Moomaw flatteringly claimed to remember me from my very, very, very brief college career when we were both in the same institution.]
Professor Larry Vale from MIT actually had been to New Orleans a number of times as a planner so was able to take some of the pressure off of me in defending the reasons and whereabouts that people continue to hold on and return to live in New Orleans, even though still damaged and less than fully secure.  Vale obviously merits some follow-up as a friend and fellow traveler on NOLA Team!
What was most heartwarming was the deep resonance that saving and protecting New Orleans still has, if not at the professorial level, certainly at the level of the students who asked repeated questions after the panel ended, that were highly sympathetic to the New Orleans recovery.  Katrina and its devastation and the federal default have seared a generation, and once the debate is over in theory, it will hopefully be students and the leaders and thinkers that they will become that will continue to support the rebirth of the city. 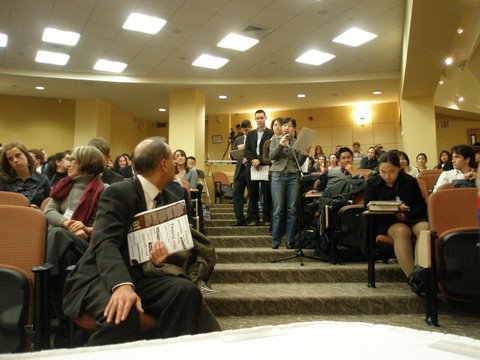