Bhubaneswar        A jolt in the schedule to advance the ACORN International partnership with Action Aid (India) had me flying to Bhubaneswar, a moderately sized city I knew little to nothing about other than that it was the capital of the Indian state of Orissa, the poorest state in a poor nation.  Bhubaneswar had been one of the comparison sites though in the joint survey and organizing we did with Action Aid to produce the report with our India FDI Watch Campaign on the impact of corporate retail on hawkers and street vendors, so away we went to make the news, advance the campaign, and see something in Bhubaneswar that is very different:  vendor zones.
Though Bhubaneswar advertises itself as the “city of temples” and there are a huge number of them seemingly every half kilometer or so including old hermit cases and other famous sites one can see on hilltops and read about everywhere, this seems a somewhat un-Indian city.  The modern city was designed it turns out by the German architect Otto Konigsberger in 1946 and became the capital of Orissa in 1948 a year after India won its independence from Britain.  There are wide streets, a huge and lovely park, and a number of other things that strike one differently.
Perhaps we should not have been surprised that in such a city the municipal corporation would try something quite different.  From the time I left the airport and hit the main streets, Dharmendra pointed out special street signs that announced, “No Vending Zone.”  And, more surprisingly, there were in fact no street vendors to be seen in these areas.
Our press conference was a hot ticket in Bhubaneswar.  Three or four TV cameras took mass footage and there were reports from throughout the area peppering us with questions.  Having spent a career largely watching press conferences from the back of the room, it is somewhat wild to be handed a mike and suddenly see a dozen photographers and cameramen pushing towards the table while I make my few remarks.  An gora (foreigner) whose organization stands with hawkers is a news here.
After the press moved on, Mr. Praker, the head of the Orissa Road Vendors Association (which has put 10,000 hawkers on the street to protest Reliance Fresh store openings last year!) took us to see some of the vendor zones and talk to the hawkers.  There are now 50 it seems around the city all of which are less than a year old, so this is a new experiment of sorts.  The first zone we visited was all fruit vendors who had been consolidated from around the area.  There were customers, but since almost all of the stands sold the same fruit, it was hard not to think of Mr. Daniel’s comment from the Orissa Action Aid office wondering what the competition would do to the livelihoods?  The next zone we visited was larger and collected a diverse set of different establishments from book sellers to cosmetic vendors to purveyors of odds and in’s.  Dharmendra kidded Praker that his members were no longer street vendors but they were now shopkeepers, and that seemed true since most of these spaces were now very small shop areas.
The vendors when asked said that business was down a little compared to last year.  Nonetheless, they were still optimistic about the experiment.  Why?  They were now licensed after a manner so they were not having to pay constant bribes to police and others nor were they continually harassed to move or this or that.
Will this work?  Hard to say.  When Dharmendra and I walked back from the park we passed by a street vendor with his fruit and vegetables laid out neatly and attractively on a blanket next to a paan shop along the main road.  Many of the vendors are hawking as a second or third way to make a couple of more rupees.  This level of secondary informality would hardly seem attracted to a shopkeeper’s hours and location.
Location, location, and location will drive this and as Wal-Mart has taught many of us, saturating the market with easy access is also the key to the survival of the hawkers in India.   Meanwhile we heard over and over that despite the huge struggle and victory of a year ago with Reliance Fresh when they committed to not sell fruits and vegetables at their stores, they have quietly begun to do so in all ten of their outlets in Bhubaneswar setting the table for future battles to come. 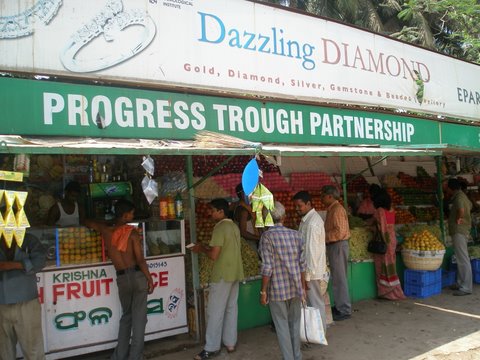 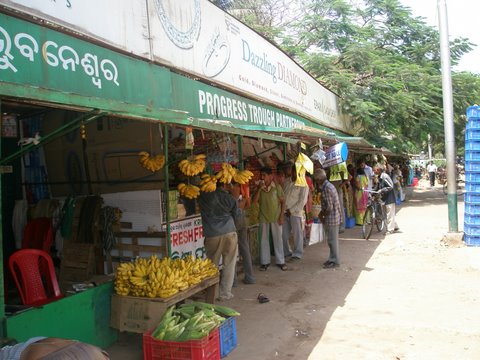