Kolkata        In the almost four years that we have supported the India FDI Watch Campaign (www.indiafdiwatch.org), we have found over and over again that our best allies have been the traders, acting as middle men between the markets and the consumers, and the hawkers, who are vending the goods directly to the consumers in carts, small shops, and on the streets themselves, despite the fact their interests are often different.  In the run-up to the national elections in India in May there is a small lull before the coming storm, since the existing government knows it cannot roil the waters while the government itself is up for grabs.  Part of my visit to West Bengal is to see for myself whether there are prospects for model programs, state by state, to hedge against the backroom dilution of rules barring foreign direct investment in retail.  Several meetings clarified the prospects for creating alternatives.
The first was with Mahesh Singhania, chairmen of the West Bengal Traders Federation, at his home.  After I sat with him for the final half-hour of his daily prayers, Mr. Singhania, raised the issue of creating an appropriate retail regulatory scheme that would provide community benefits, protect livelihoods, regular size and products, and other issues on a state level.  He grilled me on similar laws and ordinances elsewhere in the world and their effectiveness.  West Bengal is a potential ground zero for such an effort because of the unique fact that in this wild and robust democracy of India, the left coalition parties led by various communist parties, have governed Kolkata and West Bengal for more than 30 years, a record they share with Kerla on the western coast of the country.
Asking him whether or not they would be able to ally with the hawkers on this issue, he expressed no reservations about doing so and spoke easily of his working relationship with Shaktiman Ghosh, the leader of the hawkers’ union in Kolkata.  He did mention the obvious political problem in fashioning a deal with government that being the simple fact that hawkers as a rule were informal which meant not only unlicensed, but also paying no taxes to the city or state.  Often as they set up their operations outside small shops, the shopkeepers also were alienated as entrances were sometimes narrowed and purchases sometimes lost.
Shaktiman Ghosh welcomed me warmly to his office later in afternoon.  His national union of hawkers has been a consistent ally.  He spoke most recently to our 2nd informal workers conference in Delhi on the 23rd.  He was quick to show me a new federal law recently passed in Delhi that he felt moved considerably to legitimatizing the current and future existence and rights of hawkers.  His optimism was boundless about the prospects for local arrangements as well.
Around the Park Street subway station not far from New Market, we toured a food vending area on the wide sidewalks in front of large, newer office buildings, which Shaktiman touted as an example of a model program and a prospect for the future.  The agreement was premised partially on the width of these sidewalks, since the hawkers had agreed to leave two-thirds open for pedestrian traffic, while setting up their food stalls on the street side of the footpath.  The hawkers wore aprons, which in fact was unique.  They had agreed to some simple health requirements for preparation and cleaning.  The steady stream of business as crowds massed for busses and grabbed fast food from the street vendors also spoke to some success here.  Speaking to some of the vendors and their area union leader, the reports on increased wages were huge.  One vendor making 1200 rupees a day was already becoming an urban legend here in Kolkata where such income in this line of work was previously unimaginable.  (about $24-25 USD)
Whether or not we have solutions that would speak to the 20,000,000 hawkers around the country is unclear, but these efforts were encouraging.  Kolkata is a special place in the world, unlike any other that I’ve ever seen, but this may also be where we make our stand on this issue in India. 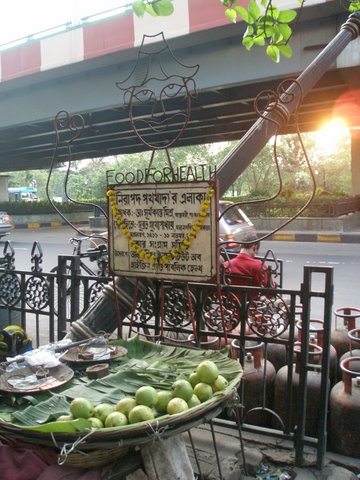