Little Rock    There have to be some habits and certainties and for my family one of them is going to Little Rock for mi companera’s family reunion on the Saturday before Easter.  The family swears they really want to see each other, but after many years of experience the mass volumes of fried catfish, fries, and dozens of desserts compete for attention I believe.
I enjoy going back as well because it gives me a time to spend some hours visiting the ACORN office in Little Rock, seeing the banners and pictures of leaders and comrades I worked with for decades and think of still, hearing KABF on the radio, and seeing what is new with my Local 100 members in the city and state.  Without fail over recent years I have also benefited from a visit with Zach Polett, the ACORN political director, who faithfully mans a post in a corner office at the front of the building.
Seeing Zach this year gave me a chance to ask him what the pre- and post-election Republican attack has done to ACORN and his work with the organization.  I was particularly curious if he and his troops were dealing with any fire this time or just more smoke when it came to the cyclical attacks ACORN had experienced around its voter work during my era as well.
I was not surprised to find the largely unreported story from Zach, including by Lou Dobbs this week, that in fact there had not been, never been, and was not now an investigation of ACORN and its voter registration activity in any venue or state either by the Bush Justice Department or the new Obama Justice Department.  This had also been the case in the past, but given the publicity around the Las Vegas bust-in at ACORN’s office there and all of the firestorm leading up the election, I had wondered if there was any spark behind the spark this time causing my old friends and comrades heartburn.
Talking to Zach it turned out there was absolutely nothing in the way of a federal investigation despite all of the publicity and blogging.  He related that a pro bono, white shoe law firm in DC had stepped into the breach to help them out, and the Justice Department at the end of 2008 (during the Bush term still!) had agreed with ACORN’s lawyers on language they would release if ever asked to comment on the question of an investigation and its non-existence.  This is quite an unusual step since Justice by its own rules is supposed to not comment on any investigation in order not to harm or prejudice those under the lamplight, so the fact that they were willing to join in exculpatory language for release with ACORN shows how red faced they were by the Britney Spears moment of accusations and innuendos around ACORN’s pre-election activity.
Unfortunately that does not mean this kind of publicity is over for ACORN or that the damage to the brand will quickly be mended.  Since the organization cooperated with local authorities anytime they discovered something amiss, it also means according to Zach that as cases — some of them now a year old — come to indictments on individual miscreants, that ACORN will be tarnished once again by the same brush, no matter how unjustly.
Nonetheless for the record, note it down somewhere:  there is not now, nor has there ever been, a Justice Department multi-state investigation of ACORN and its voter registration activity! 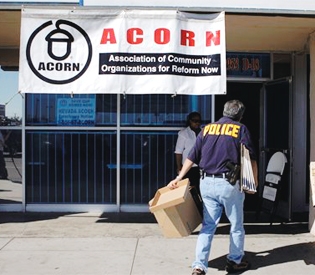