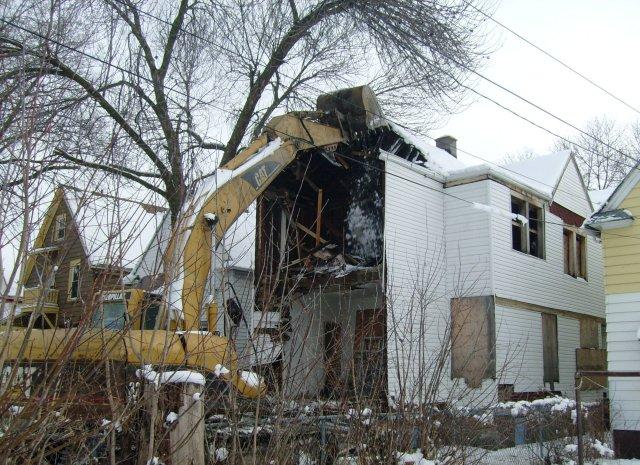 Milwaukee       Talking to the housing and economic development people, whether from the government or nonprofits, I kept hitting my head against a ceiling when it came to the thinking about the housing problems.  Looking and thinking about the issues in the Amani neighborhood made this headache unavoidable.

Work with me on this.

In Amani you have a community that within the boundaries drawn by the city and many of the residents has a population of about 8500.  The population is actually increasing there in recent years, which is a question worth contemplating at another time.  There are roughly 1400 properties, and more than 300 are rated by the city as vacant, which is more than one in five properties.  More than 20% of the properties are also tax delinquent.  It goes on and on like this.

Various programs available from the city allow small grants for repairs.  Some other programs fund nonprofits to help finance and rehab houses but often limit them to no more than four per year.  Some are catch-22 situations where to get money to fix a roof, the owner has to have insurance, but insurance companies cancel the owner when they have roof problems.

The math isn’t simple, but it is unforgiving.  If the only problem was rehabbing the vacant homes, and money was available to rehab only fifteen per year, it would take twenty years to bring the existing vacant properties up to snuff.  With more than 70% of the housing stock built before 1939, at a minimum all of those houses would be over 100 years old, so time will not stop, there will be more houses that need rehabilitation, whether occupied or vacant.

Working block by block would be hard as well.  Even doing five houses per block to try to turn a block around, there are 130 blocks in Amani.  One block a year would take twenty-six years, so that would never work.  Even three blocks per year doing fifteen houses would take ten years, and of course time will not stop there either, making housing rehab at this level a Sisyphean project.

Meanwhile the housing valuation is going down, not up, in Amani.  The last evaluation of the assessed value of Amani properties showed a drop of over 4% from $29786 to $28533 or $1253, even going the wrong way compared to inflation.  A low-to-moderate income homeowner looking to borrow $20,000 to rehab their own home from a bank is going to face the problem of putting $20K into a $30K house and finding the valuation for collateral purposes in the Amani market might only move the property to being worth $35,000, not $50,000 making most banks skittish to say the least.

To turn the community around and create a real tipping point, it would seem that organizations and government should be looking at doing 100 houses a year for four or five years.  If the price tag was $20,000 per house that would be $2 million per year or eight to ten million to get it done.  If $30,000, then then $3 million per year, if $40,000 then $4 million per year.  Those are not unmanageable numbers.  That’s a mid-range condo in New York City.  A project that size would raise all boats and the whole neighborhood, because it makes sense.  If such a project only raised the average valuation of the houses from $30,000 to $40,000, that would mean a $14,000,000 bump in the neighborhood and over five years a minimum of $70,000,000 for the housing stock.

If we were downtown or commercial developers, the city and local banks would be standing in line to finance the deal, because the numbers make a difference.  When we’re talking about housing, we are being nickeled-and-dimed, when we need to push to get to scale to stop playing catch up and start getting ahead and making real change.