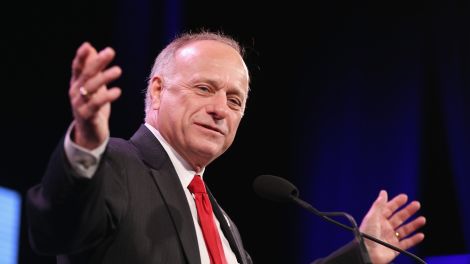 Little Rock       I’m no friend of Steve King, the nine-term Republican Congressman from the 4th District of Iowa, hard in the northwestern part of that state.  Heck, I got a camera ticket on the interstate going through Sioux City some years ago and refused to pay it, largely because of King and all he represents.  During the time of troubles for ACORN in the United States, King was in the thick of it.  Watching “The Organizer,” I get to see him reprise his grandstanding, hateration regularly, as he stands before the television cameras and a bowl of acorns claiming that he keeps an acorn in his pocket to remind him of how important it is to stop the organization.

That was ten years ago.  Nothing King is doing now is any different than what he has been doing year in and year out, over and over.

He’s in the news again for standing up for white supremacy and so-called western civilization, which is actually a euphemism usually for white supremacy and rule by the rich as well.  Even though I may take his anti-ACORNisms personally, all of this is just his latest outrage.  He has been the cheerleader for neo-Nazis, immigrant bashing of the worst and most vile kind, and stone-cold racism on a regular basis.

This time California Congressman Kevin McCarthy, the House Minority Leader, stripped King of his membership in three influential House committees.  Listening to the radio yesterday, one of his constituents on a call-in show in Sioux City said it hardly mattered, since King had never been able to get any legislation done or have any impact on the committees anyway.  Former Vice-President Dick Cheney’s daughter, now the lone Congressional representative from Wyoming and the deputy minority whip, made a big stink on a namby-pamby resolution that knocked white supremacy.  It passed overwhelmingly in the House with only one nay vote.  Steve King even voted for it, which should be a good barometer of how irrelevant the motion was.  Some are talking about organizing a PAC to get rid of him in 2020.  The Democrats may move to censure King since they hold the majority.  Some Republicans are suggesting that he start looking for another job.

Why all the ruckus now?  My own view is that a lot of this is a fog machine to take the attention off of Trump’s regular tweets that say almost the same thing as King’s do and a cover for the fact that the Republican Party depends on hate for their vote totals.

Furthermore, my view is let the racist scoundrel stay in the House.  He is an important symbol and spokesperson for a central support of the Republicans from the extreme right and a reminder of the base that they may not like acknowledging in public or polite company or the news media, but is critical to their politics and their strategy for hanging on to power.  Until they change their hearts and minds, let Steve King stay in office until the voters turn him out in shame and the Republicans disavow jingoism, racism, and the rest of his bile as fundamental parts of their program and appeal.