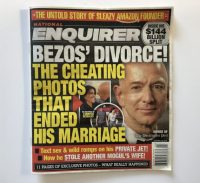 New Orleans        You can’t make this stuff up.  Jeff Bezos of Amazon is the richest man in the world with an estimated worth of about $140 billion, more than some small countries.  Born in Albuquerque 55 years ago and raised in Houston he founded Amazon in the mid-1990s, and, shebang, twenty-five years later he’s rolling in it.  He married about the same time and has four children with novelist Mackenzie.  Normally, we would read about his exploits in the financial pages of the paper.  When his effort to shake down the city of New York for part of the second headquarters of Amazon fell apart, we read about him on the front pages of the papers.

You have to ask yourself, how did this dude become National Enquirer material?  He had an affair with a southern California pilot and former news announcer named Lauren Sanchez, who is 49 years old and had separated from her Hollywood agent husband.  There families had been social friends, and he had hired her company to do aerial promo shots for his space travel company, Blue Moon.  Reportedly the affair became known to the partners last year and to quote one report, they “dealt” with it.  These are all grown people, right, but then all hell breaks loose.  Bezos and his wife separate and the next day, the National Enquirer says they have lurid, sex-texts that Bezos sent Sanchez.  You’ve got to be kidding me?  The richest guy in the world, this cutthroat, robber baron of business who has gutted out entire industries is doing something this stupid and juvenile?

Like I said, you can’t make this stuff up!  But, then they do start to be making stuff up, because it gets even weirder.  He goes public and everywhere we all see his grinning bald head, and thankfully that’s all we see.  He then has a security chief, and they start claiming this is somehow a Trump thing because he owns the Washington Post, it’s retaliation, and maybe there are foreign countries involved.  Then a bit later it turns out that Sanchez brother sold the pics for over one-hundred thousand to the Enquirer.  Silence for a while as people try to refashion their jaw to the rest of their faces, but then the security chief comes out swinging again claiming Bezos was hacked by the Saudi’s who didn’t think killing Khashoggi was enough, they wanted to burn Bezos for allowing him a column in the Washington Post.  Really?  I mean, really!

The divorce settlement comes out with Mackenzie, and they are all making nice like their buddies still, and the terms seem to be that Bezos forks over $36 billion to her, just enough to keep the title as the world’s richest man.  He gets to vote her shares at Amazon and gets 100% of the Post and Blue Moon.  Mackenzie Bezos, unless she changes her name, is now the 4th richest woman in the world reports say.

I wonder if the security guy is really earning his keep.  Given how well Mackenzie came out on all of this, has he really looked into that angle.  She knew Sanchez.  It seems well-known that the brother was a loose cannon.  It’s not like she was sitting on the street collecting donations before.  She might have slipped a couple of million to Sanchez in hopes she could finally cash in herself and be rid of this guy.

Ok, I’m sure that’s not true, but it’s certainly no more farfetched than this rest of this baloney.  She seems to have been the only adult in the room with this whack-a-doodle-do crew.  I’m not saying it’s what she had asked Santa Claus for last Christmas, but with $36 billion, she can still buy a pretty happy ending for herself and her children from this sordid, stupid tale, which is not the situation for most newly minted single mothers of four.