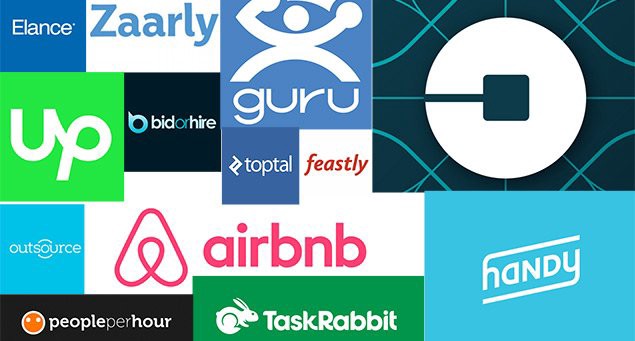 I am one of the few people in America who don’t have either Uber or Lyft working on my phone.  I had Uber once on a trip to the airport on a Sunday in Ottawa when I couldn’t get a cab, but now their security device makes you identify pictures time after time after time, until not only did I give up when trying to get the app to work on my phone in Mexico, but my son and daughter also gave up as well, when I asked them for help.  Lyft about the same, some credit card issue.  Whatever.  I’ve certainly ridden in both as well as a lot of airport cabs, so I regularly talk to the drivers.  None of them are only-Lyft or only-Uber.  All bounce from app to app.  Some of them do drive fulltime, but do so for a host of companies.  Most of them drive when they need a couple of extra bucks or as part-time work on their off days from what they call “real” jobs. All of them complain about the money!

Polling indicates that my episodic conversations are the norm.  The Wall Street Journal referenced Gallup and other polls finding that workers “churned through these [gig] jobs quickly, never staying in one for more than a few months,” and most workers are “using these services to supplement …income, rather than treating them as full-time work.”  Like I said.

In all of the hype and promo, mostly from the company, its investors, and fan clubs, as some of the big ones begin to go public huge cracks in their foundations, especially when it comes to the workers or actual suppliers of their services, become clear.  You can’t talk to an AirBnb provider or read an article about some of them, like the recent New Yorker piece about the way the company has ravished whole neighborhoods in Barcelona, Spain, without hearing the cries of algorithm victims, where Airbnb has arbitrarily lowered the amount they can charge, because they red-lined a neighborhood in their own way.  The Journal also told a story of a veteran Lyft driver who said, “When I started it was almost $2.50 per mile.  Now in L.A., I think it’s about 80 cents, and … in Minnesota, it’s 70 cents.”  Needless to say, the driver has quit Lyft.  He can’t afford to continue subsidizing the company.

In organizing we talk about canvassing and other efforts that can “burn the turf.”  The churn in workers may be doing just that to the labor market willing to provide these services to line the pockets of the wannabe zillionaires unwilling to pay for their labor, especially in an economy now at a 50-year low for unemployment at 3.6%.  The Journal is spot on in quoting Fountain, a company that helps giggers get workers, saying that they “…may burn through the entire available labor market of people interested in or willing to do roles likes this.”

Fountain’s CEO notes that the companies didn’t have an answer for him when he asked that question.  I do.  This will be the time that the app companies either go out of business or that workers finally have the leverage to force fair wages and benefits from the company, if the actual service has real value to consumers, rather than cheap pricing based on exploitation.