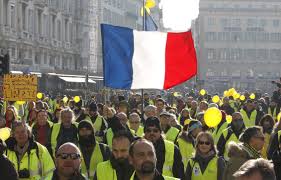 Chicago     There’s a lot of interest in the Yellow Vest movement in France.  Because ACORN has an affiliate there, we’re often asked what is really going on.  Yoan Pinaud, out head organizer in Aubervilliers for the Alliance Citoyenne ACORN, has been following the events closely and talked to many of the participants. We asked him to write his perspective in the current issue of Social Policy.  I wanted to share his analysis

A Community Organizer’s View of the Yellow Vest movement

The Yellow Vest movement has disfigured the French political landscape since November. Starting from a protest against rising fuel taxes, the demands of the movement have rapidly widened to embrace a much wider field of discontent, ranging from social issues (rising wages, calling into question the removal of wealth tax) to democratic issues (implementation of a citizens’ initiative referendum, right of dismissal of elected representatives, etc.)

The Yellow Vests first and foremost destabilized the power of President Emmanuel Macron, forced new concessions and the organization of a “big debate” to try to save his mandate. He also divided the French left and the traditional social movement, particularly the labor unions, who have never known how to position themselves in the face of a popular mobilization that was built without them and have dithered between providing timid support and expressing frank defiance.

Understanding what fueled the mobilization has been an inspiration for French organizers as well as a confirmation of what needs to be done.

Creating a “We” from a shared anger

The Yellow Vest movement is first of all the awareness of a large number of people that they share similar living conditions, the same feeling of injustice, and the same anger. If the increase in fuel taxes triggered the movement, it is above all the fact of seeing living conditions decline and the feeling of no longer having a hold on “classic” political responses to stop this downgrade, which fueled the protest. The “Peripheral France,” at the heart of the Yellow Vests movement, is a discovery of a new “we,” which existed previously in itself, but not for oneself. Social networks have played a decisive role by helping to build communication between scattered people in small cities.

On a smaller scale, that’s what community organizers are doing everyday: questioning the anger and feeling of injustice in everyday life and proposing collective actions on this basis.

Macron as the targeted decision-maker, a strong “Them” with power

For a strong “we” to be created, we need a “them” to measure.  The yellow jackets have benefited from a luxury opponent in the person of the French President of the Republic. Concentrating all the powers and displaying a contempt of popular classes, he crystallized in his person and his government the popular anger.

It is however remarkable to see how much the movement of the Yellow Vests is polarized vertically against the power embodied by President Macron. The movement never sought a “horizontal” adversary such as strangers or neighbors. There have been some racist, anti-Semitic or Islamophobic drifts in the thousands of direct actions during the movement, but they have remained marginal and have never been the essence of the mobilization. Moreover, the far-right’s efforts to back up the movement and grow with it has been a relative failure.

How the direct actions tactics got strong recognition and actual wins

Taking action together to show that the “we” exist and have our interests recognized and not just the interests of big business is what cemented the movement of Yellow Vests. Without a leader or long-lasting spokesperson, everyone was offered the opportunity to take ownership of the movement by carrying out the actions they wanted to do according to the modalities that suited them best: roundabout occupation, filtering barrier, blockades, rallies, demonstrations, or displaying the vest on their windshields with only the famous yellow vest visible to other automobile drivers.

Whether or not there is a factor of disorder, this element is nevertheless fundamental to understanding the success of the movement: people mobilize because it is “their” actions, “their” slogans and not some coming from the unions or parties which are considered too institutionalized and domesticated to put power in trouble. What is at stake is achieving dignity by taking action of one’s own, and on one’ own program.

The movement was also driven by this feeling, practically euphoric, of taking action, saying I finally count, and we can win. The majority of people do not mobilize to simply testify, but because they are convinced that acting can make a difference.

Tactically, they are making sure the actions are effective enough with the cost for the participants being as low as possible. While retired people and unemployed would occupy the roundabouts the whole week, the fact that the yellow vests days of big action are concentrated on Saturday, not requiring the demonstrators to take expensive strike days is symptomatic of this desire. Conversely, the repression put in place by the government with dozens of people crippled or disfigured following policemen flashball shots had significantly weakened the movement by discouraging families and many people to come to the demonstrations after the four first week ends.

The weakening of the movement was also related to the significant concessions by the government. After three weeks of actions, blockades, and demos, Macron announced a set of decisions ranging from lower taxes on gasoline, higher pensions and poor workers’ income for a total of 10 billion €. Though widely judged insufficient, these measures have actually been the most significant victory by any social movement in France in fifteen years.

By shaking up the traditional social movements with an unprecedented mobilization of people outside of any collective organization (unemployed, rural workers, craftsmen, small traders, retirees), the Yellow Vests movement has shown new inspiration on how to organize big in difficult environments. Based on the same principles that what we use in low-and-moderate income neighborhoods: organizing from anger, polarizing against the vertical decision-makers, and executing disruptive direct actions that can be costly for them.  The spontaneous and Facebook supported dynamic of the movement still questions the possibility of accelerating and reinforcing such popular movement through our community organizations. And, questions also the possibility of building on this movement to reinvigorate current mass members organizations.

An organizer can’t deny a focus on actual organizational resources. The lack of identified leadership and any structure in the yellow jackets make it challenging to survive past the momentum, just as would confront any similar movement. As spring is coming, all the French radicals are asking themselves one question: will the considerable people power built in the French rural areas during this 2018-2019 winter be usable for the next battles to come?