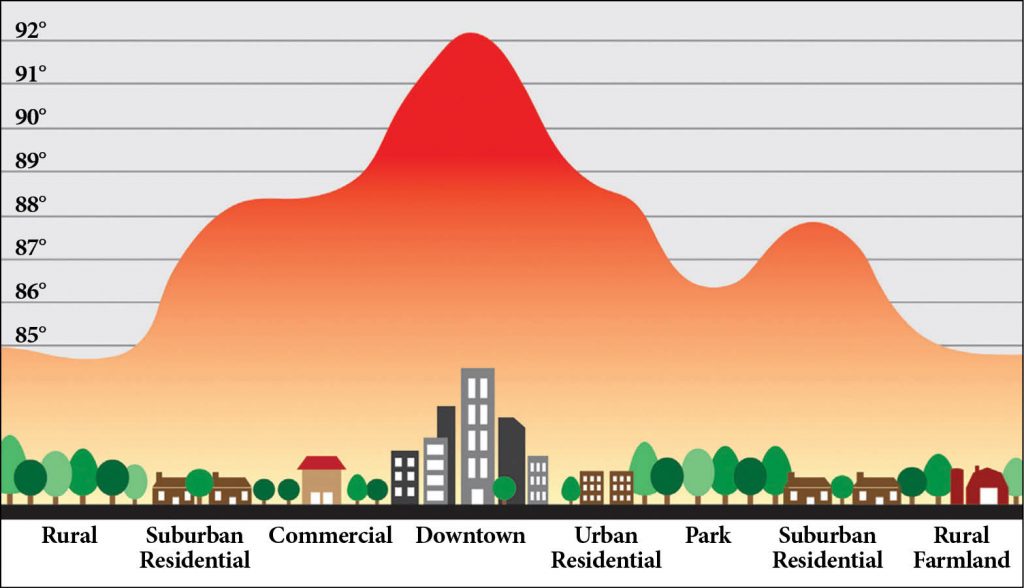 Gulf Shores, Alabama   It’s rained part of every day for two weeks.  There is supposed to be a one-day break in New Orleans without any rain.  Living in the semi-tropics that passes for normal.  I used to say summer in the city was 85 percent humidity and 85 degrees Fahrenheit.  Now, looking at the weather every day, it’s 90s all the way down.  This week is supposed to feature not only rain but 94- and 95-degree temperatures as well.  This climate thing is real – and dangerous.

A report in the Washington Post was clear.  Research led by Vivek Shandas, a professor of urban studies and planning at Portland State University with volunteers, found “heat islands” in both Baltimore and Washington, DC.  Not surprisingly the temperature variance was significantly higher in lower income and minority areas with spread sometimes reaching twenty degrees.  The reason was simple to find:  fewer trees and more pavement.

A colleague of Dr. Shandas, Jeffrey Hoffman of the Science Museum of Virginia, made the case that the impact of heat islands on health impacts is devastating.  As the New York Times reported:

He found that the four warmest ZIP codes also saw the highest rates of heat-related ambulance calls and emergency room visits. Richmond’s heat islands also overlap with its communities of color and low income, according to Brianne Mullen, the city’s sustainability coordinator. The city has just two cooling centers, and, because of budget cuts, the number of trees planted fell drastically in 2016 and 2017 before rebounding last year.

Richmond is dragging wagon on this, but the Times reports progress in Baltimore:

Baltimore is trying to ease the heat burden by planting more trees. The city plans to increase its tree canopy to cover 40 percent of the city, up from 28 percent in 2015, according to Lisa McNeilly, director of the Baltimore Office of Sustainability.

Other reports have noted that Houston recently planted 175 trees along a city thoroughfare in order to grow the shade that would significantly reduce temperatures there.

Getting back to New Orleans, older working-class and minority neighborhoods in areas where land is a delimiting factor have no front yards with front doors, like Philadelphia, Baltimore and other row house cities, within only a sidewalk’s length of the street, offering no shade, and guaranteeing hot spots.  There are some homes along tree-lined neutral grounds, but these areas are more commonly uptown in richer, whiter areas or in suburbs along the lake where the levee board filled cypress swamp lands and planted oak trees in the easements.

The research on heat islands needs to be circulated widely.  Recent proposals on neutral ground in cities as different as New Orleans and San Francisco have proposed everything from housing construction in such medians to paving bicycle lanes.

We need to literally keep as much “green” as we can, and bring in as many shade trees as cities and neighbors can afford to build buffers in the inner cities against the heat waves that are here now and likely to create private and public hells in the future without aggressive action.

Please enjoy “Across the Pond” by DJ Trotsky.  Thanks to KABF.