Gulf Shores     An article in the New York Times entitled “In El Paso, Hundreds Show Up to Mourn a Woman They Didn’t Know” by Audra Burch is the one article that President Trump, Senator McConnell, and the rest of the gang should read if they want to understand the real America and its people and the need to actual do their jobs and provide some protection from tragedy. 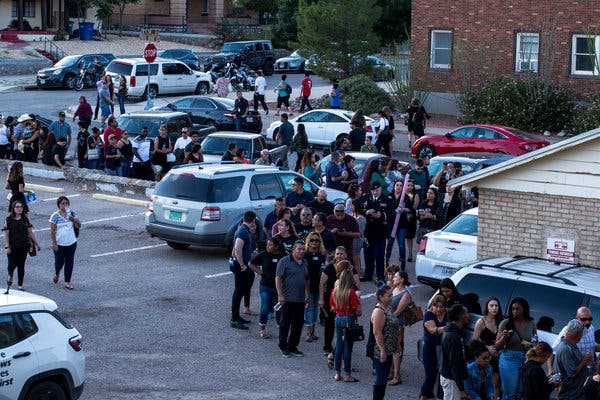 The line to attend the service snaked around the church and on the blocks beyond.Credit Joel Angel Juarez for The New York Times

In El Paso, Hundreds Show Up to Mourn a Woman They Didn’t Know

EL PASO — Just about every morning for the past two weeks, Antonio Basco has risen before dawn to buy as many floral bouquets as he can fit in his car and carried them to a makeshift memorial for the victims of the mass shooting in El Paso.

He places the flowers one by one around the white wooden cross for Margie Reckard, his wife. This is his solemn ritual, born of grief and unmooring: tending Margie’s garden.

“She loved any kind of flowers. I could walk down the street and find flowers that had been run over a thousand times and she would think it looked like a million dollars,” Mr. Basco said on Friday morning.

Hour later, the La Paz Faith Memorial and Spiritual Center in El Paso would be spilling over with bouquets, as hundreds of strangers came to pay their respects to Reckard at her visitation and prayer service.

Basco had invited the public to the service this week, worried that he would have to bury his partner of 22 years alone. Reckard, one of the 22 people killed in the attack on Aug. 3, has children, but Basco has no direct relatives. When Perches Funeral Homes, which was handling Reckard’s arrangements, learned of Basco’s intentions, it extended an open invitation to the service on its Facebook page.

The response was unimaginable. The funeral home received about 10,000 messages and tributes, and more than 900 floral arrangements. They sat along the front of the chapel, below the stained-glass windows, on every table in the foyer, in the fellowship hall and on the staircase. They were sent from across America. New Hampshire. Oregon. Kentucky.

Some came from Dayton, Ohio, the site of a mass shooting less than a day after the attack in El Paso.

And crowds filled the center to capacity. Hundreds stood in a line snaking around the church and on the blocks beyond.

“This is amazing,” Basco said as he walked down the center aisle, surveying the unfamiliar faces.

“You took a stranger off the street,” he added, and showed him love.

Victor and Mary Perales, of El Paso, said they had come to support Mr. Basco because they knew something about sudden loss: Their oldest son died unexpectedly two years ago. Mr. Perales wrote a letter to give to Mr. Basco offering his condolences, but also offering friendship.

We know how hard it was for us and we were surrounded by family. I can’t imagine what it would feel like to go through this alone,” said Mr. Perales, 72, a retired truck driver. “I said we are going to this funeral to give him a hug and let him know we can be his family.”

The moment Alicia Solomon Click heard about Mr. Basco, she knew she was taking a road trip. The professional singer drove six hours from Sante Fe, N.M., and had stood for two hours in the visitation line. “I am here to tell Basco for every crazy nut there are thousands of us that love him,” said Ms. Solomon Click, 61.

For part of the service, a mariachi band played as Mr. Basco and Ms. Reckard’s relatives greeted and hugged guests. Mr. Basco met some of his wife’s relatives for the first time. When a performer began singing “Amor Eterno,” or Love Eternal, much of the church sang along.

Bishop Harrison Johnson, a Perches funeral director, delivered the eulogy. Before he began, he looked out into the standing-room-only sanctuary and turned to Mr. Basco. “Look at all the friends you have now,” Bishop Johnson said, to thunderous applause.

He preached from Matthew 14:22. Faith will get you through anything, he assured the crowd, even something as evil as the Walmart massacre. He talked about a united El Paso that was not defined or divided by color — a direct answer to a racist attack.

“Whatever you do, do not stop walking through the storm,” Bishop Johnson said. “Don’t stop because you will walk out of the storm.”

Ms. Reckard’s children and grandchildren also attended the service. Her oldest son, Dean, 48, described her as loving and kind. “She would have been overwhelmed to see all the love El Paso showed her,” he said.

Mr. Basco and Ms. Reckard met more than two decades ago at a bar in Nebraska. He was immediately smitten.

“I took one look at her eyes and it was over with,” Mr. Basco said before the service on Friday, tears welling.

Mr. Basco said that when he wants to feel closest to his wife, he heads to the makeshift memorial and talks to her. Sometimes he returns at night and sleeps next to the cross, hardly visible among the piles of flowers and mementos. 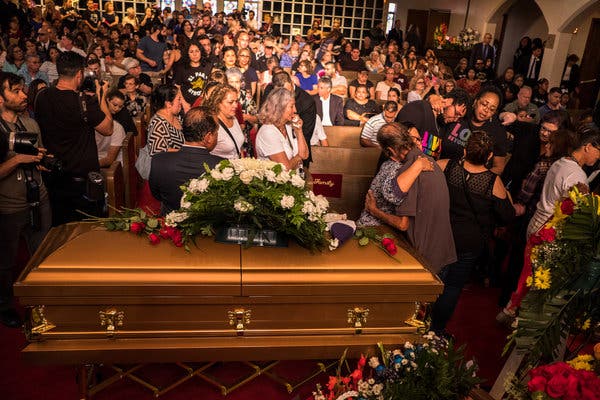 Mr. Basco had invited the public to the service, worried that he would have to bury his partner of 22 years alone. Credit Joel Angel Juarez for The New York Times 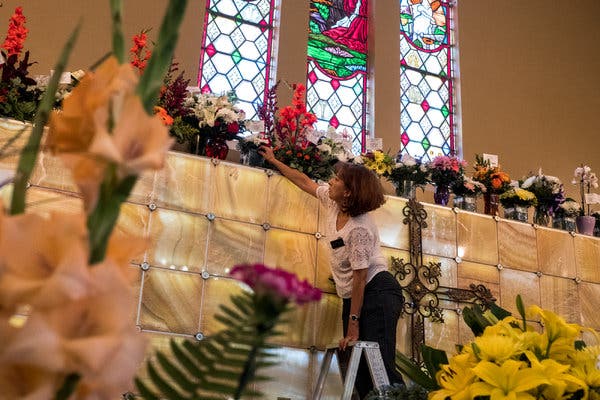 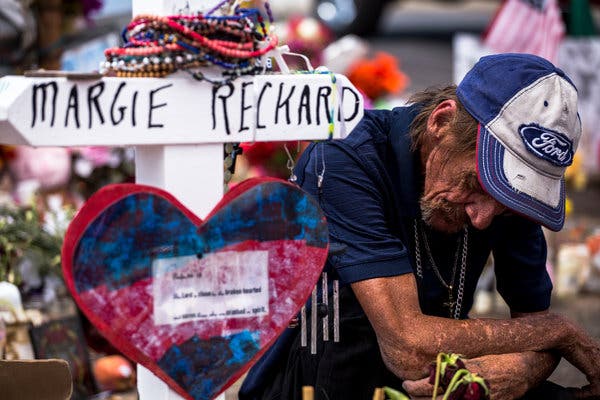 Mr. Basco at the memorial for the victims of the shooting. He said that he sometimes sleeps there to feel closer to his wife. Credit Joel Angel Juarez for The New York Times