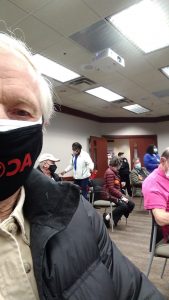 Pearl River     I’ve got a lot of issues with our local nonprofit hospital conglomerate in southern Louisiana and the Mississippi Gulf Coast, Ochsner Health Systems. Labor Neighbor Research & Training Center, ACORN, and Local 100 United Labor Unions with the help of interns from Tulane University and the University of Ottawa reviewed many years of IRS 990s that Ochsner and other nonprofits are required to file with the government to sustain their tax exemption. Ochsner’s record was embarrassing! Hardly three-quarters of one-percent of its gross revenues was devoted to charity. They came close to paying their CEO about the same as they gave to charity.

I say that to also say that I have been a patient of Ochsner ever since an ambulance took me from an injury in a football game my senior year in high school to their emergency room with a banged-up knee or what they now call an ACL, but what we called then, a Joe Namath knee injury. Annual physicals and this and that, and all of a sudden, I get an email message from their website on Friday night asking me if I’m ready to get my Pfizer vaccine against the Covid-19 virus? Well, yes, I am.

As soon as it was clear that the governor had mandated that once frontline health care people, especially in the nursing homes, as well as nursing home patients, had been taken care of then, anyone lucky enough to cross the dateline at seventy years was good to go, I had tried to knock on their door, call in, and go on their website. No luck. But now they were reaching out for me. The first available appointment was 815 AM on a Sunday with the next one three weeks later.      Sign me up, I’m ready, no ifs, ands, or buts about it. Set me free of this damned plague!

Give the devil its due. I got there five minutes early, and there was a crowd all down the hallway and around the bend. Damn, this is going to take forever. Not!         In less than 30-minutes from front to back, it was done. They had nurses, staff, and security everywhere. They were excited to be doing this for people. They were efficient and well organized. Everyone was given a card to prove they had taken the vaccine, which might be good to get me on a plane again sometime soon as well! We had to wait fifteen minutes to make sure there was no reaction.   Smart!

I’ve read the stories of concierge doctors being hounded by their millionaire patients to jump the line. I’ve read that some elite medical institutions, like Vanderbilt, Columbia, NYU, and hospitals affiliated with Harvard who were among the first recipients of the limited supplies in the United States gave precious shots to administrators and workers who have nothing to do with patient care, and who were not 75 or older. I’m hoping I don’t read that here, but for now as the rollout stalls, Biden promises more, and vaccines are going wanting because states and medical facilities are disorganized, I’m proud to have been in the right line, where age happened for once to trump beauty, as the saying goes, and it all worked well.

I just hope everyone is as lucky as I was and takes advance of the opportunity!