New Orleans     Let me be honest.  We can hardly keep our primary Facebook account and website up to date.  We gave up on Twitter long ago and have sworn it off until Trump is gone.  Because there are multiple organizations in our family of operations from unions to community organizations to radio stations to publications to research and training outfits and more, we are almost always deficient.  We need someone to do this full-time, but finding the money to justify the wage and work has been a strain.  I’m not whining, just stating the facts, but it makes me wonder how so many make such mischief and mayhem on social media?  Who are these people?  Where do they find the time?

Today’s headlines included social media attacks and threats against state level public health officials by “open-uppers,” or whatever they call themselves.  They use Facebook to organize, and Facebook im-moderators allow anything to go, even if it breaks their rules of service until they hear complaints.  The other day there was another published piece on how conservatives and racists were trolling around the Black Lives Movement to such a degree in their outrage at the protests and the very principles being advocated on the streets that they came up seven times out of ten on the most trafficked Facebook sites with a BLM reference.  These folks have weaponized social media, particularly the passive-hostile Facebook and its lean-out overseers.

K-Pop fans and other groups counted coup on the Trump Tulsa rally claiming that they had signed hundreds of thousands of fake people up to register as participants to bust expectations for his rally.  Trump campaigners swear that is not the case.  Nonetheless, who are these people?  It turns out that fans of various pop groups in Korea and their US counterparts for K-Pop and other groups regularly engage in on-line contests to defend or advance their interests and in some cases have also used their social media skills to raise money for favored causes as well.

These seem mainly to be volunteer armies using these methods for various madness, and then there are state actors from Russia, Iran, China, North Korea, and, let’s be honest, undoubtedly the United States, that also have paid and professional teams running other unsettling social media attacks.  They target each other, all of us, elections, ethnic and racial groups, and whatever and whomever might divide us.  I’m not even talking about free lance hackers and hustlers yet, but they are everywhere as well.

I find this confounding.  How do we compete with all of this?  How do we control and contain these multiple attacks and advances everywhere?  Where is the line between free speech and the fact that we have to be able to get our word out and communicate and the way all of these tools are being manipulated and hijacked for either good or evil?

Today, I’m just raising my hands and crying help.  You know how to find me if you have a clue.  If there’s no solution, we need a volunteer army as well to fight for our side, contact me to enlist ASAP!

New Orleans     It’s hard to categorize the experiences of four in a row rat-a-tat Zoom calls commemorating ACORN’s 50th anniversary.  The technology isn’t seamless, at least for me, but even while it is strange and less satisfactory than in person, it is also weirdly intimate, because you are face-to-face with people, some of whom you haven’t seen in a while or may have never met, but feel close to somehow.  There was way too much sugar in my coffee for my taste, but the experiences were amazing nonetheless and opened interesting windows to what people and especially our ACORN members were thinking and worrying about. 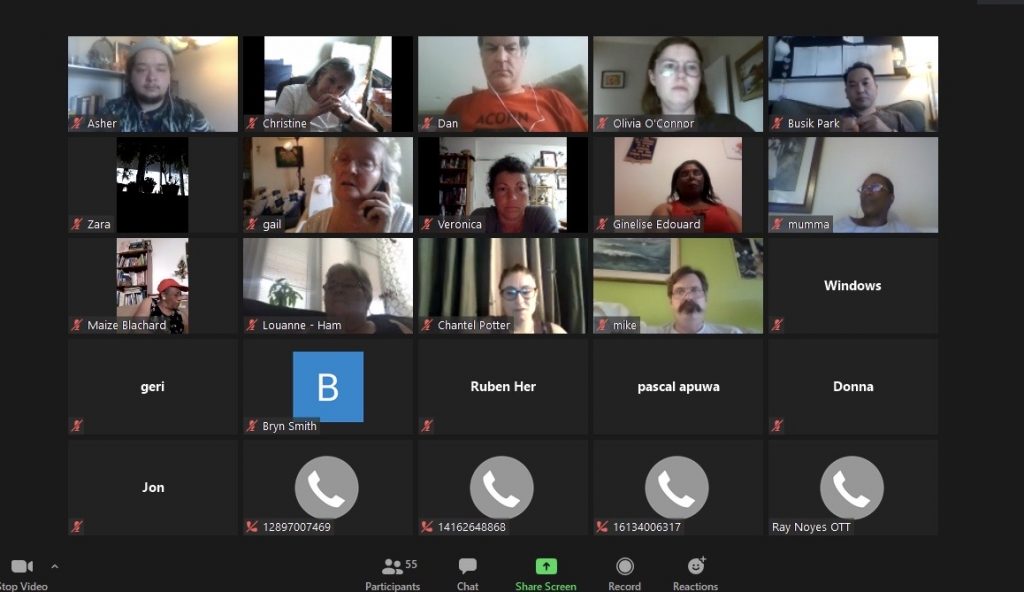 The lineup was straightforward.  The first session was homegrown with the organizing staff and volunteers from around the world who toasted ACORN at midnight India time.  The second was almost eighty friends, supporters, and veterans from various decades of ACORN’s fifty years.  Those sessions were moving.  Then there was a session embedded in a forty-person fundraiser for Ottawa ACORN and finally one for more than fifty leaders from coast to coast in ACORN Canada.  Those sessions were wildly informative for me, offering a close view of what members were thinking about in these strange and troubling times.

Members in Ottawa asked in a couple of ways, when it would be time to get back on the streets again and protest.  They were hungry for meetings.  One stumped me by asking if I could share a story of a victory in the United States that we may have won behind the scenes that might offer some tips to our northern neighbors.  A young woman asked me as their power increased in Canada what they needed to do to prepare for the James O’Keefe’s and gotcha pirates of the right wing. 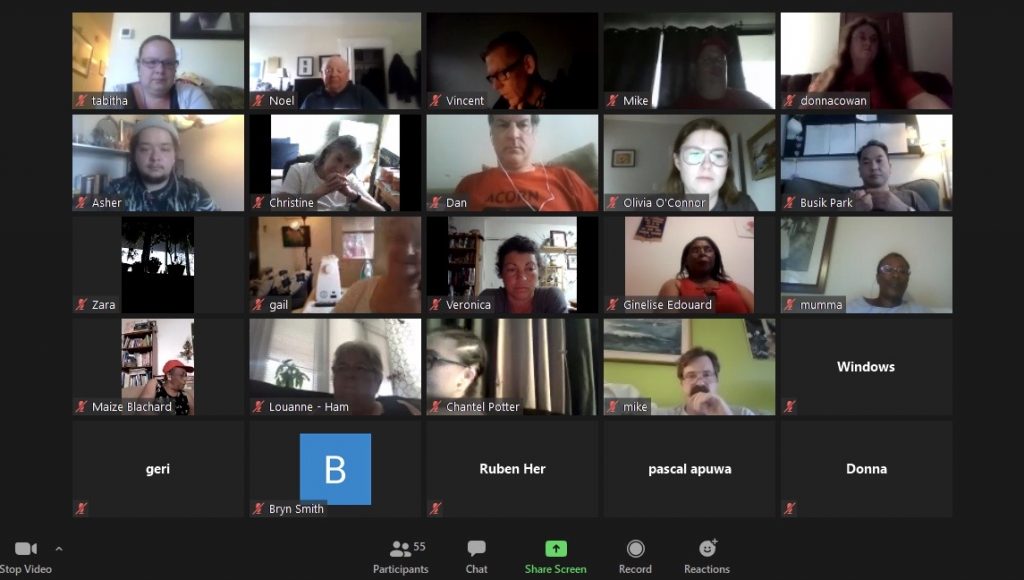 Leaders across Canada wanted to know what to make of the racial justice protests in the United States and what they were seeing in their own country, and whether it would work this time.  A young woman asked how the organizing model was being adapted to new technologies and the future, which provoked several comments about making provisions for youthful leadership in the organization.  Several older members waxed philosophically about the lack of progress in many areas of social reform over the last fifty years.  Kent State was evoked.  A Harper’s reader asked to hear the story of Hillary Clinton opposing ACORN’s lifeline utility victory in Little Rock almost forty-five years ago.  Another member wrestled with whether the difference between Canada and the US was collective concern versus the individualist obsession. 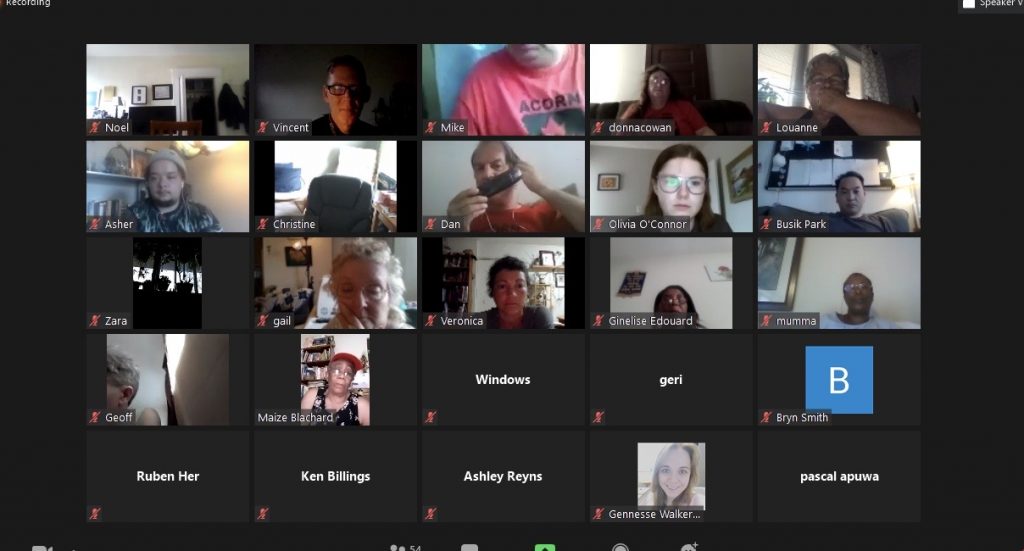 We say listening is the key to organizing, so listening to 235 people on zoom in less than five days was a gift full of surprises, concerns, and hope.  Anyone who thinks our people are monolithic in thought or philosophy is wrong.  They are wide ranging in their interests and information sources.  They are worried.  They are itching for a fight.  They see landlords and other business ganging up on them still. They see resistance to legal reform.  They find race and ethnicity as issues unresolved. 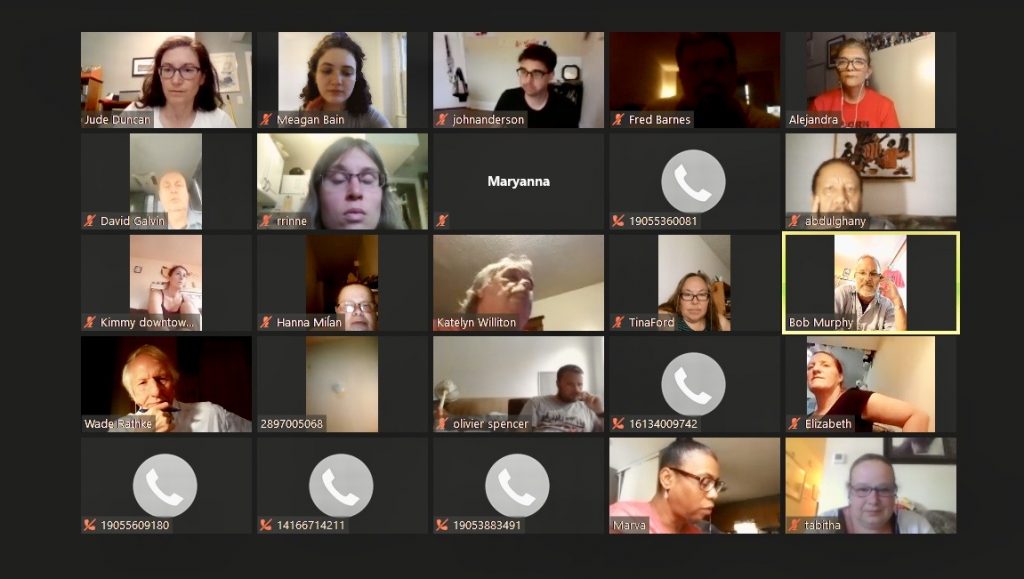 Still, in the main, they have hope and conviction embedded in tremendous faith in the organization. Many wanted me to share advice on how they could keep going day after day as I had done.  My answer was easy:  the fire of my rage is ever burning.  We all shared that anger and promised to continue the struggle, and in that commitment, hope springs eternal for victory, some day.