New Orleans      It may be too early to make a definitive list of lessons learned from the off-year elections in Louisiana, Mississippi, and Kentucky, but the one thing that seems crystal clear is that the Democrats have some hope, the Republicans have some deep worries, and to the degree President Trump makes these elections all-about-me, he’s a loser.  Nonetheless, there are some trends worth noting one year before the 2020 US electoral sweepstakes.

When Trump heats it all up to boiling to pull his base out of the woods, he also pulls out his opponents, and those in the middle, as heavily.

In Louisiana for example, 385,000 more voters came to the polls in 2019, than 2015.  John Bel Edwards was reelected as governor at the head of the Democratic ticket with 28,527 more votes out of Orleans Parish, which is coterminous with New Orleans, with a surge of black votes, but also taking some Lakeview and Uptown precincts that are typically Republican.  He pulled 66000 more votes cumulatively from East Baton Rouge Parish and Orleans.  He won suburban Jefferson Parish which is nearly the size of Orleans and was the original landing spot of white flight, and the heart of Representative Steve Scalise’s congressional district and the legislative district that was represented earlier by Scalise and KKK stalwart, David Duke.  Early turnout and significant effort by African-American churches were also key.

Moderate, suburban voters outside of Louisville and Lexington were key to a Democratic governor winning narrowly in Kentucky as well.  The closeness of the race in Mississippi was also partially due to suburban voters outside of Jackson and in the northern Mississippi counties that include Memphis suburbs, where many voters had leaned and loved Republican candidates from top to bottom.  Observers in Mississippi have argued to me that Jim Hood could have won had the party been more united behind his candidacy, so there may be some stories beneath the headlines there as well.

Here’s another takeaway:  The Affordable Care Act is an election winner.  I heard Eddie Rispone’s ads over and over every time I was at the gym on an elliptical machine, and they were nasty about healthcare giveaways and money to illegal immigrants in Louisiana.  Edwards campaigned on extending Medicaid coverage in Louisiana, and it mattered.  Andy Beshear, the Kentucky winner, was also clear that he would do his darnedest to expand Medicaid under the ACA there as well.  Medicaid for All may not be a good political sell yet, but fix and expand the Affordable Care Act offerings definitely delivers votes and turnout.

Make sure to remember the fact that women have the ability to hold up more than half the sky when it comes to the 2020 election, and educated, suburban and urban women, have not changed their mind about Trump and his apologists should be on every list.  The impeachment circus may not yield much, but few women are going to miss the point of a former ambassador being bullied and intimidated by Trump or the courage of the women professionals willing to stand up and speak out about the president’s foreign policy narcissism. 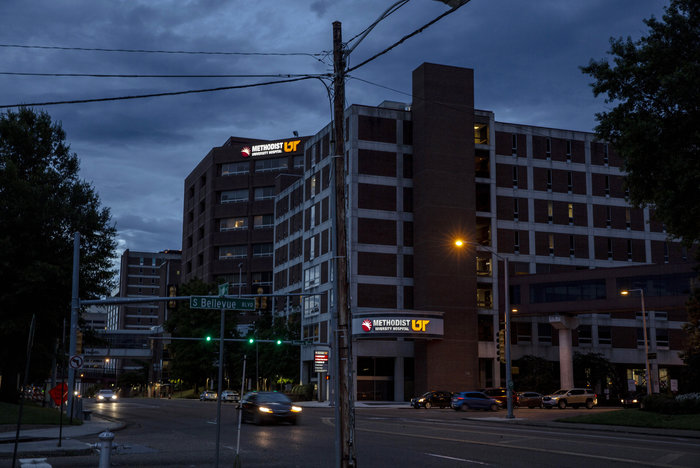 The Methodist Le Bonheur Healthcare system in Memphis, which includes Methodist University Hospital, has sued thousands of patients, including many of its own low-wage employees.
Andrea Morales for MLK50

This was especially true for nonprofits, thanks to a late amendment by Senator Charles Grassley, Republican from Iowa, their charitable contributions were going to be tracked to see if they aligned with their tax-exempt requirements.  The IRS was going to be doing the checking and the enforcement.  The penalty for not providing charitable care could be loss of the tax benefits, which would be a fatal diagnosis for most nonprofit hospitals. Reports indicate that the exemption is worth $9 billion.  They were given a number of years to get their act together, but the years since the passage of the Act meant that time has now come and gone.

What is the accounting now?  How is it working out?  We found that trying to parse the IRS 990s to determine the real level of charitable care was often whack-a-mole, where researchers with ACORN International and Labor Neighbor Research & Training Center were often trying to find the real charitable expenditures hidden in obfuscation.  Many nonprofit hospitals tried to claim the difference between their “sticker prices” for care and the Medicaid reimbursement rate as “charity.”

A recent report on Virginia hospitals in JAMA, the Journal of the American Medical Association, the doctors’ union and trade association, according to the Becker Hospital Review found that,

“…36 percent of hospitals in Virginia garnished patient wages to collect payment for medical bills in 2017. Most of the hospitals that garnished wages (71 percent) were nonprofit. Researchers note their findings “suggest hospitals with greater financial need (nonprofit, lower annual gross revenue) may be pursuing debt collection to the final stage of garnishment.” Those that garnished wages recorded average annual gross revenue of $806 million and garnished an average of $722,342 in wages, or $2,783 per patient.”

Virginia hospitals are not outliers.  The Wall Street Journal quickly reported that hospitals in Arizona followed the same playbook.  The hospital system connected to the University of Kentucky tried to use the Kentucky state revenue system to help collect their bills.  John Hopkins in Maryland was a big litigator.  All of this is after a raft of stories several years ago and reports by Pro Publica and others of nonprofits for whom debt collection was more central to their business plan than good patient care.

All of this is in the face of prohibitions in the Act that were supposed to curtail such practices, if not eliminate them entirely.  As the Journal reminded, the Act requires that,

“…hospitals must post and provide information on their financial-assistance policies and send notices that they are planning to sue. They also must limit the amount charged to the uninsured and wait four months before using stepped-up collection efforts such as filing a lawsuit.”

Ignoring the law, human decency, and the proscription that they “do no harm,” such practices define impunity.

If the IRS can’t do its enforcement job, then states, prosecutors, and the Justice Department need to step up, while the rest of us need to hit the streets before more patients are sentenced to poverty for the bad fortune of experiencing bad health.