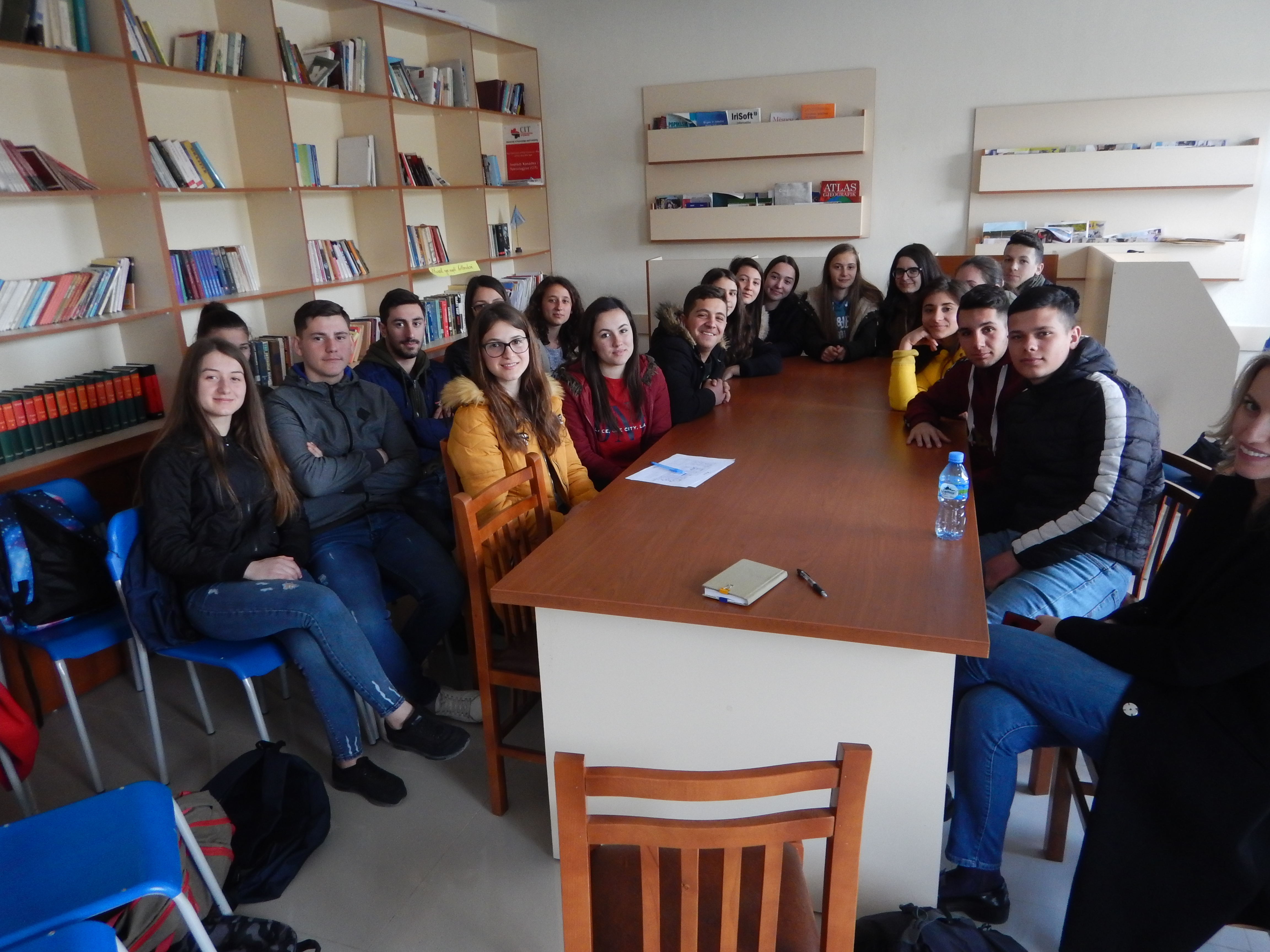 Ndroq and Tirana       We drove to Ndroq, a village of about 5000 people, that is part of the municipality of Tirana, Albania, even though it took us almost an hour to get there.  Most of the country we drove through was a mixed industrial area interspersed with some vineyards and truck farms yielding produce.  We were scheduled to visit a high school where Marsela Allmuca, my associate, had done work with women and girls on education and awareness projects focusing on empowerment as a prevention against potential domestic violence and abuse.

Most of the young people we visited with here were the equivalent of sophomores and juniors in US high schools.  Their English was good, and they were at that tipping point where they were still mostly children, even as they looked more like adults, but increasingly trying to sort out a path as adults and all of the craziness that goes with that in knowing both too much and way too little.  The dynamics were such that some of the more confident in speaking English and more accustomed to dominating class discussions held sway in the beginning, but gradually, the more we talked about organizing, the more we broke through.  In the beginning we largely heard what their fathers felt, but later we got closer to what they really thought, but it was a struggle.

The opening tone was one of hopelessness about their community and their country.  On a show of hand, almost all of them wanted out, seeing no hope for change or employment in Albania or this small village.  Surveys indicate that 79% of young Albanians want to emigrate to other countries.  Marsela told me that there were some forecasts that projected the current population of more than two million could be halved to only one-million in coming years given the existing outflow of the young and aging of the general population.  Their fathers’ issues were the conditions of roads, the inability to get paid for work performed, and the ever-present issue of resolving land ownership, which one teen thought required a $2000 fee to process, almost as much as a year’s annual wage at the minimum standard.  Finally, one girl at the back spoke up and with help eventually rallied the majority of the students around the issue of needing a playground or cinema.  The argument bizarrely focused on whether or not that issue was too trivial compared to the so-called “big” issue of better roads.  Eventually, we carried the day on a show of hands about whether we should organize for an immediate win on playgrounds, but given the permeation of hopelessness in the room, it took everything I could muster to convince them that picking issues was not a zero-sum game, but both could be handled, and both were important. 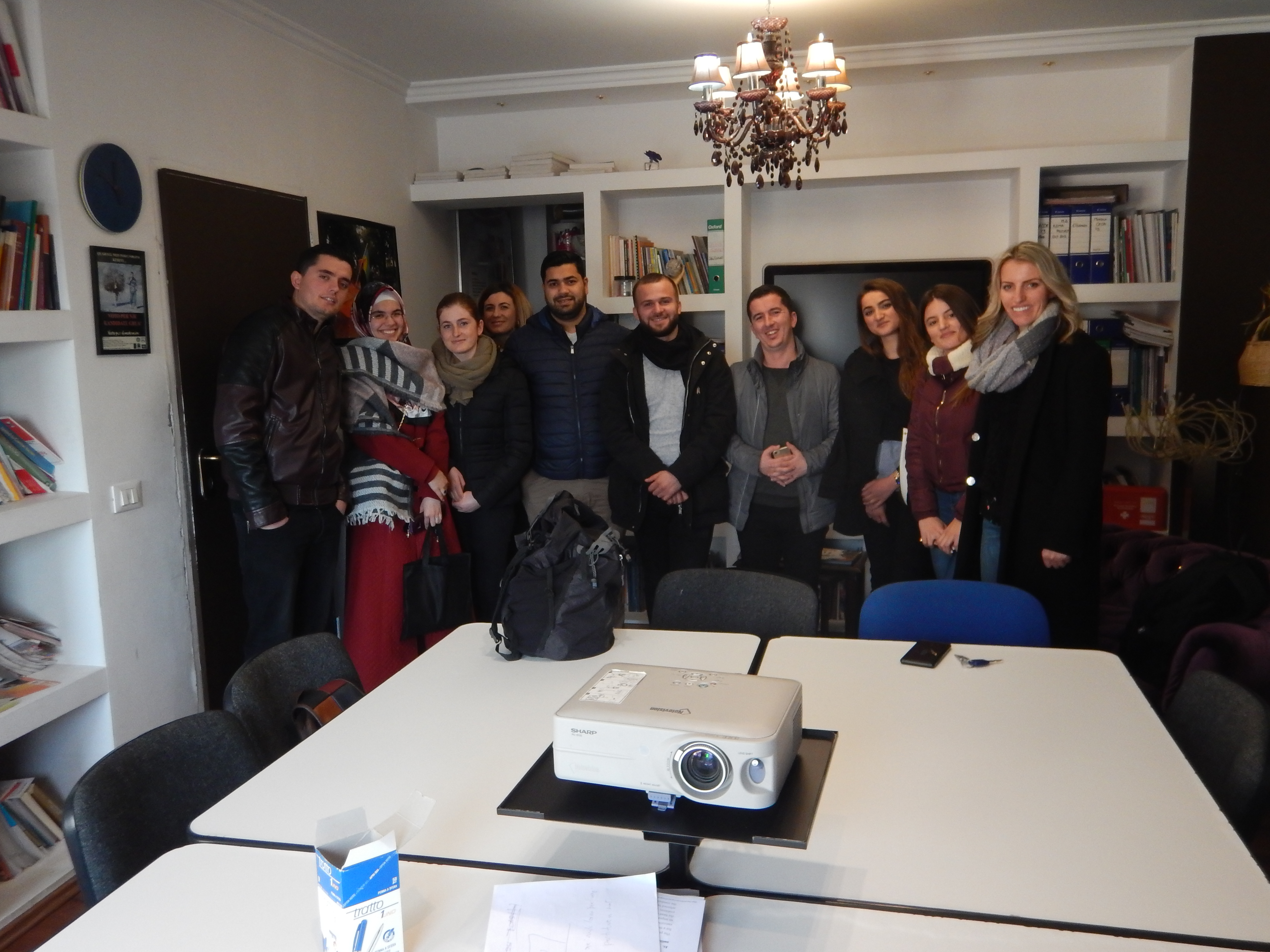 Our next meeting was in Tirana at the Human Rights House with some of their volunteers and several activists.  This smaller group ranged from 21 to 25 years of age with most in universities at some level.  Here, I caught a break.  One Roma activist told the story of how he and his friends supported a community of sixteen families being forcibly relocated from a river bank where they were living.  Launching a determined campaign against the municipal housing agency, they eventually won resettlement and a land grant for the Roma families, so that they could rebuild their homes, which gave me a great community organizing story in order to push them more clearly in the direction of building power and creating change.  Several other activists had long experience in disaster relief after a fatal explosion of an unsafe plant in their area and were now trying to create some of the first social enterprises, or so they claimed, in the country. 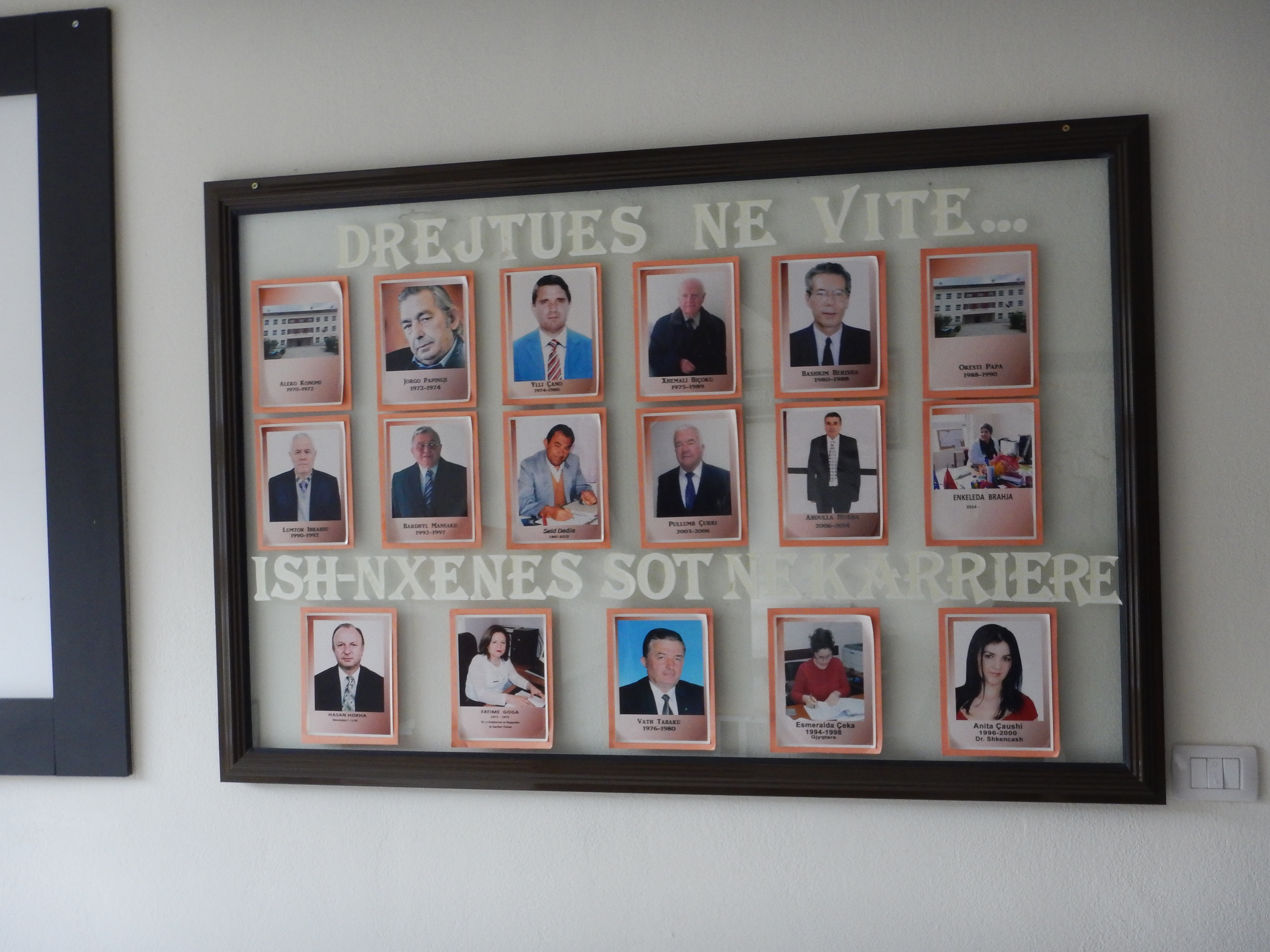 well-known graduates of the high school

Perhaps if a young person can make it away from their local village and out of the homes of their families who have suffered through cataclysmic changes in the country throughout their generation, including the fall of Communism and mass deprivation and migration, there’s hope as they hit twenty for both themselves and the country.  It’s a mountain to climb, but some at least seem to be making it, so we’ll have to help them build the bridge for a better Albania. 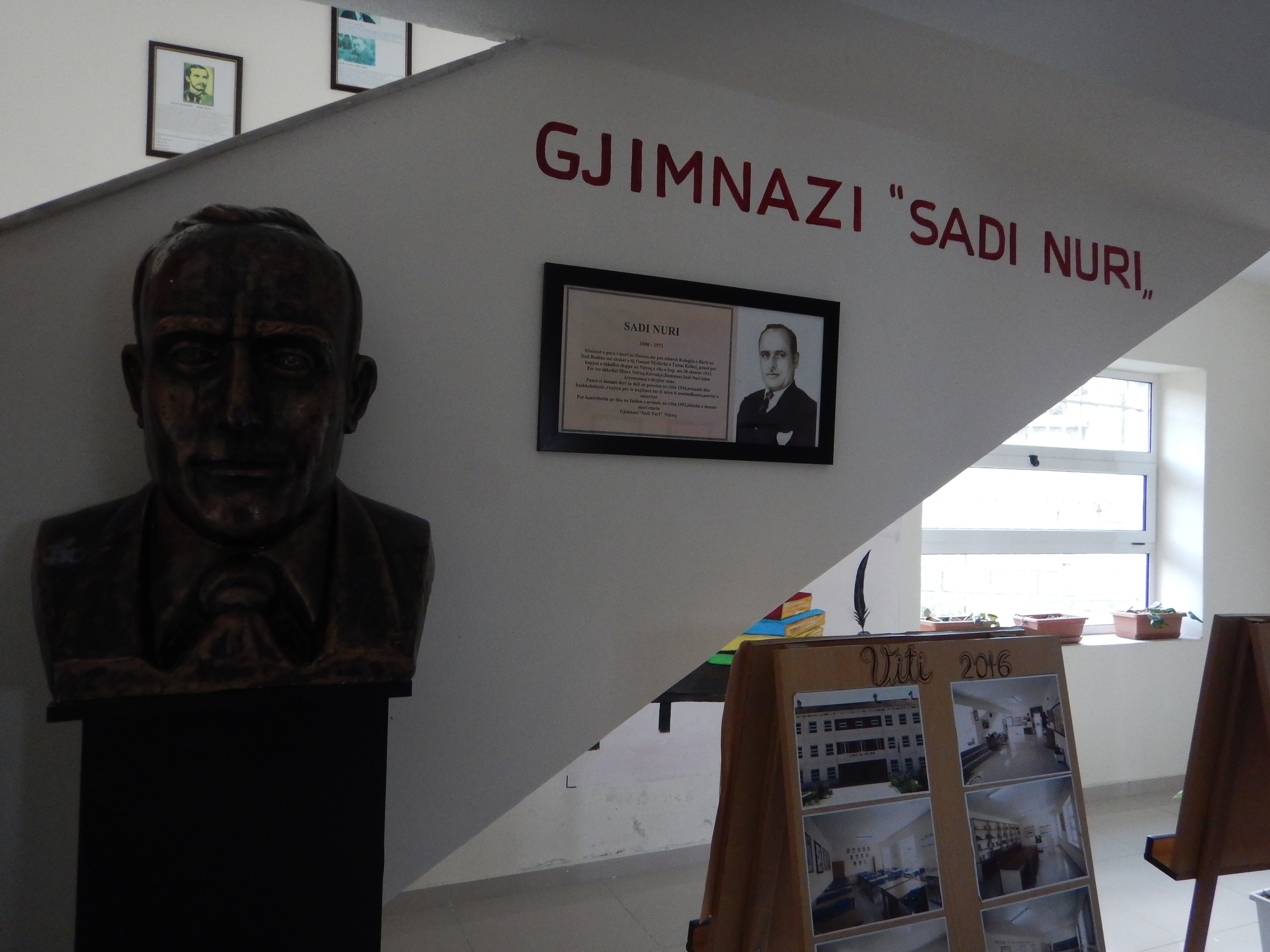 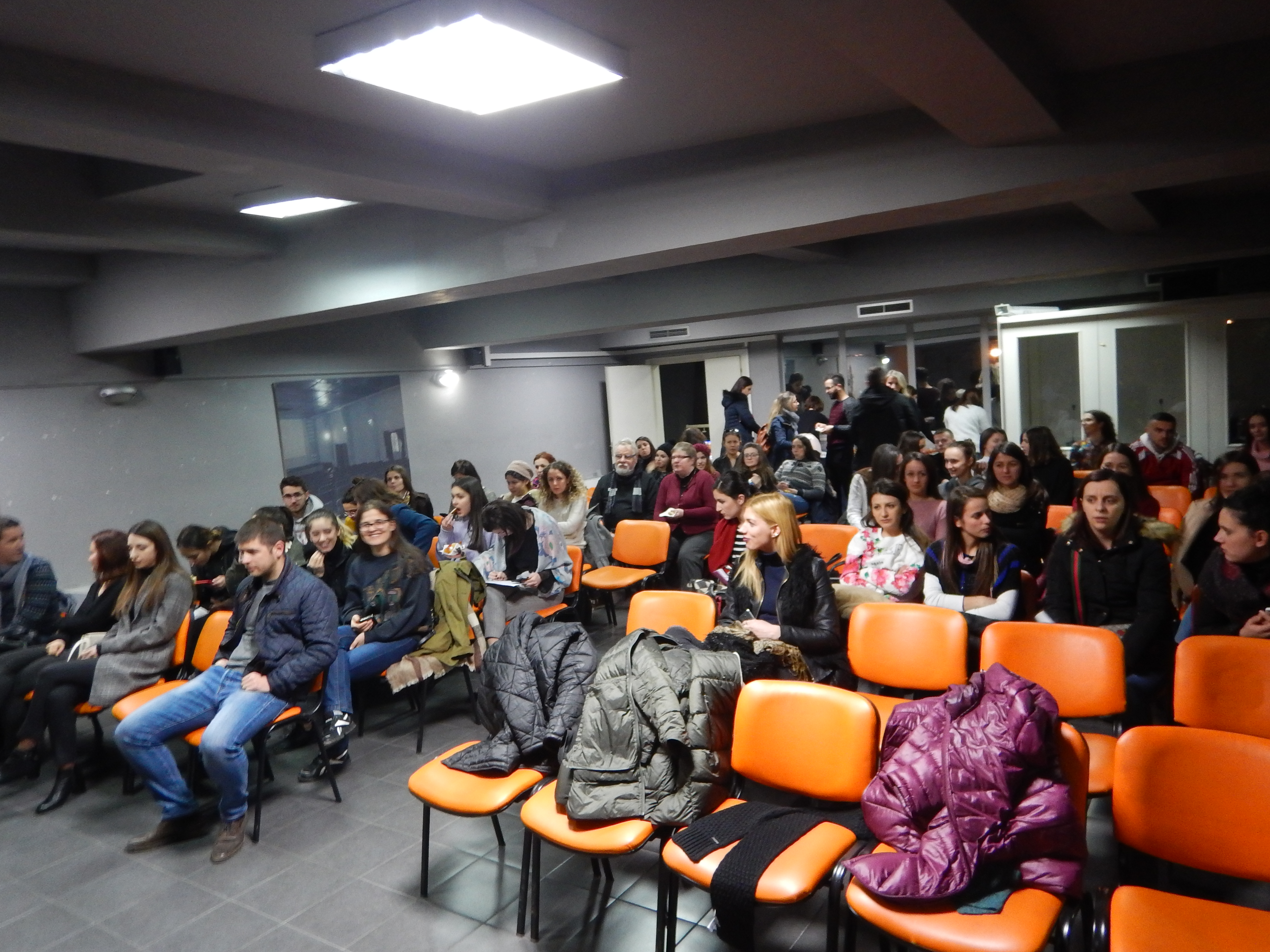 Tirana     On our schedule it simply said “Community Organizing Talks” at 6 PM in the evening.  It had been a full day that began with taping a radio interview on a national station, a walk through the central square and a look at some of its museums, and a meeting not too far away with the information officers of the American Embassy in their compound.  Asking more about the audience that would gather in a combination community center and former cinema house that evening, the best I could gather was that students from the nearby public social sciences university had been invited as well as other activists. 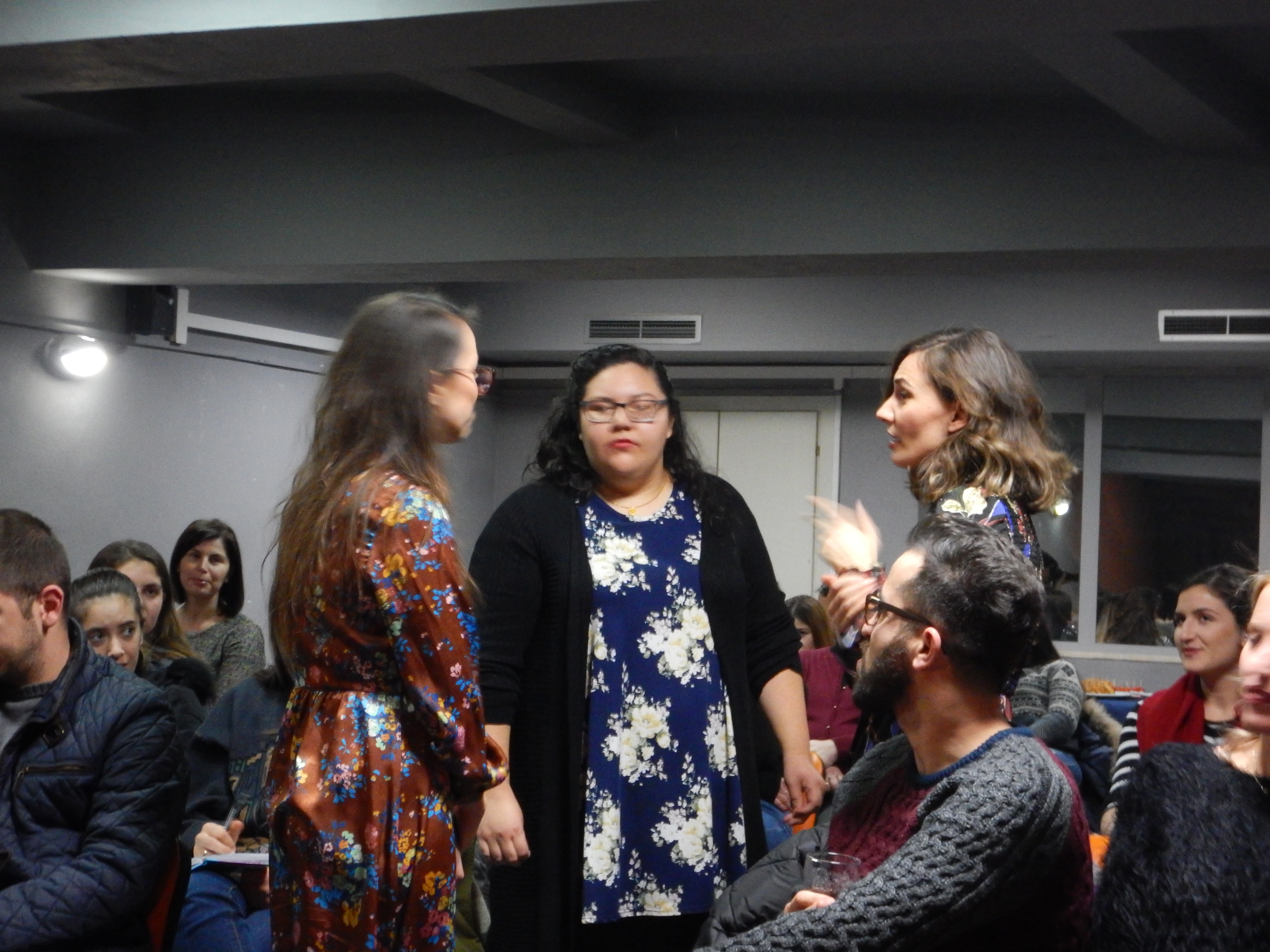 Students had been a through line in many of our group’s inquiries.  There had been an unusual and heavy dose of university student protests that began the school term in the fall over a range of issues from increased student fees to deplorable housing conditions including one bathroom for more than 300 students in one location.  The strike and protests had lasted several months and even now, as a relative calm had settled in after the holidays, there was continued unhappiness.  One of our team had been an adviser to the student protestors and several had met with the leaders during our visit, and no happiness was reported.  Some faculty were offering makeup classes over weekends to keep students from losing an entire semester.  The administration at the social sciences university had allowed the protest signs in the lobby to remain posted on an ongoing basis since so many issues were unresolved.  Rows of benched seats were left in position for continuing debates even as school was back in session. 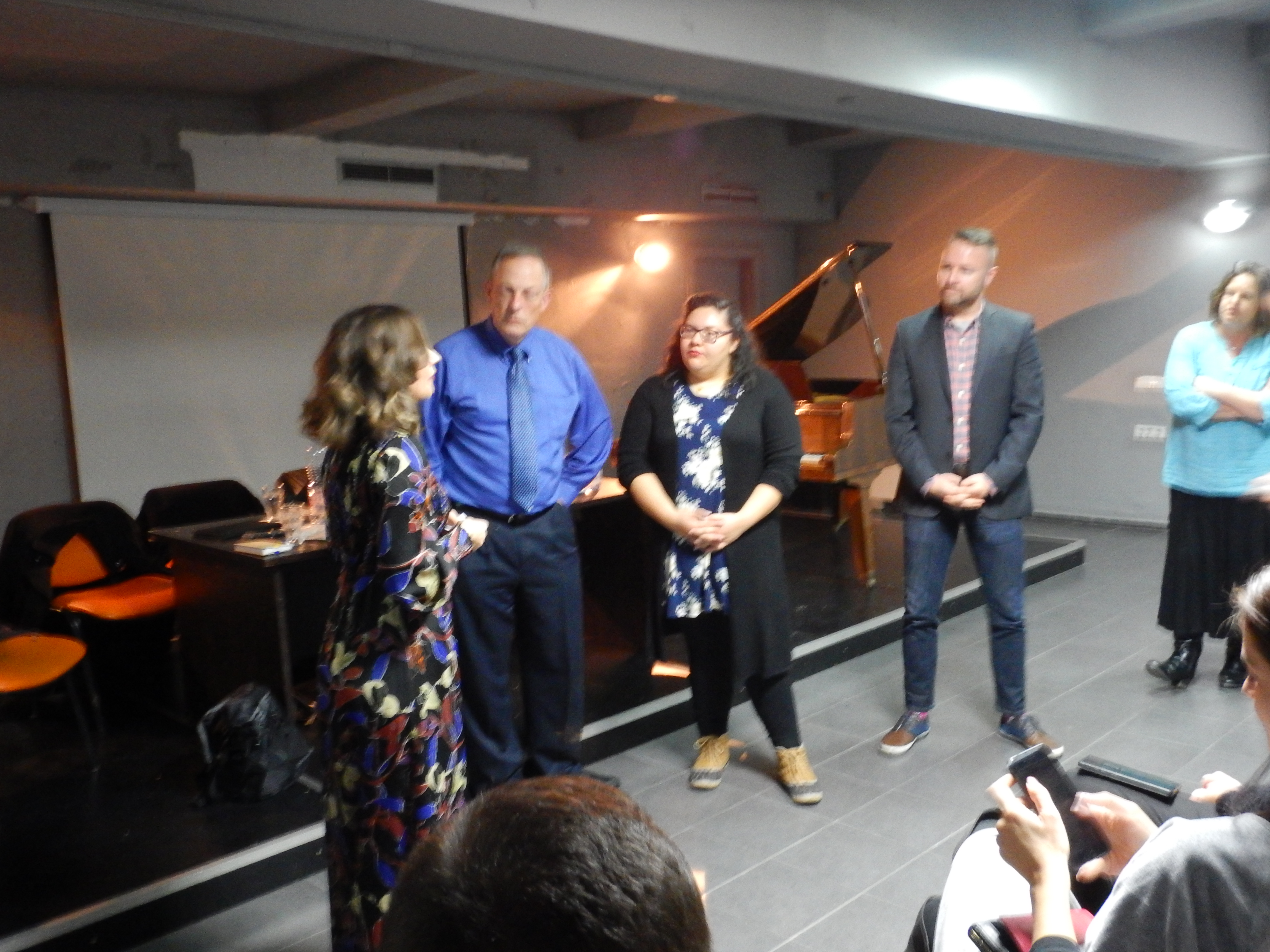 Perhaps unsurprisingly then, the room started filling up way before the opening bell with younger women predominately but a smattering of members of the public as well.  Fortunately, the program was organized differently and after a brief introduction jumped right to a series of explications by the panel on what community organizing was and how it worked.  The sound and lighting also necessitated those of us on the panel to stand up to be heard and seen, which also helped energize the proceedings.  Looking for something to do before we began, I had worked the crowd to get everyone to sign the attendance sheet, so when asked to begin the session, I walked out into the audience and identified all of the people I had recruited to that task as my “organizing committee” coming from different parts of the neighborhood to take leadership roles and do the work to form the organization, which is the fundamental key to the success of the ACORN Model.  Jessica Moreno from Action NC followed me and did the same in a doorknocking exercise.  Next there was a mock action with other members of the panel playing the role of politicians, and so it went. 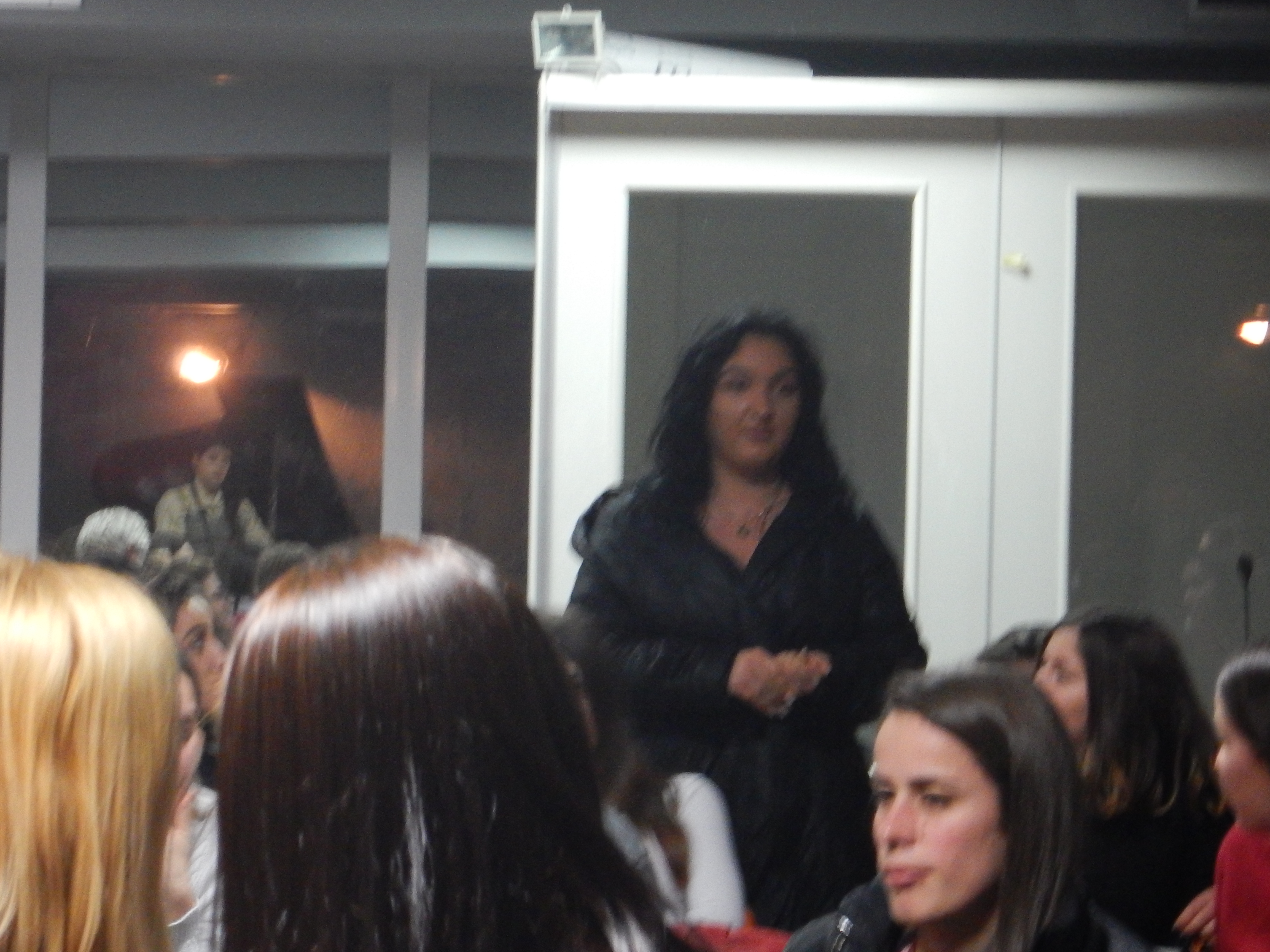 The audience was engaged and spoke freely in the questions and answers period.  Some with anger at mistreatment, others searching for hope in the work in order to stay in their country.

It’s hard to tell how these things go usually, but in this case, I could measure it precisely.  I counted 55 people in the audience, excluding the five on the panel itself. Looking at the attendance list, there were 55 names filed out.  My organizing committee had made sure the form began with all columns filled out, and sure enough the organizing tool worked with only three blanks left empty, inconsequentially, out of 330 possible squares on this attendance list.  Damn fine work! 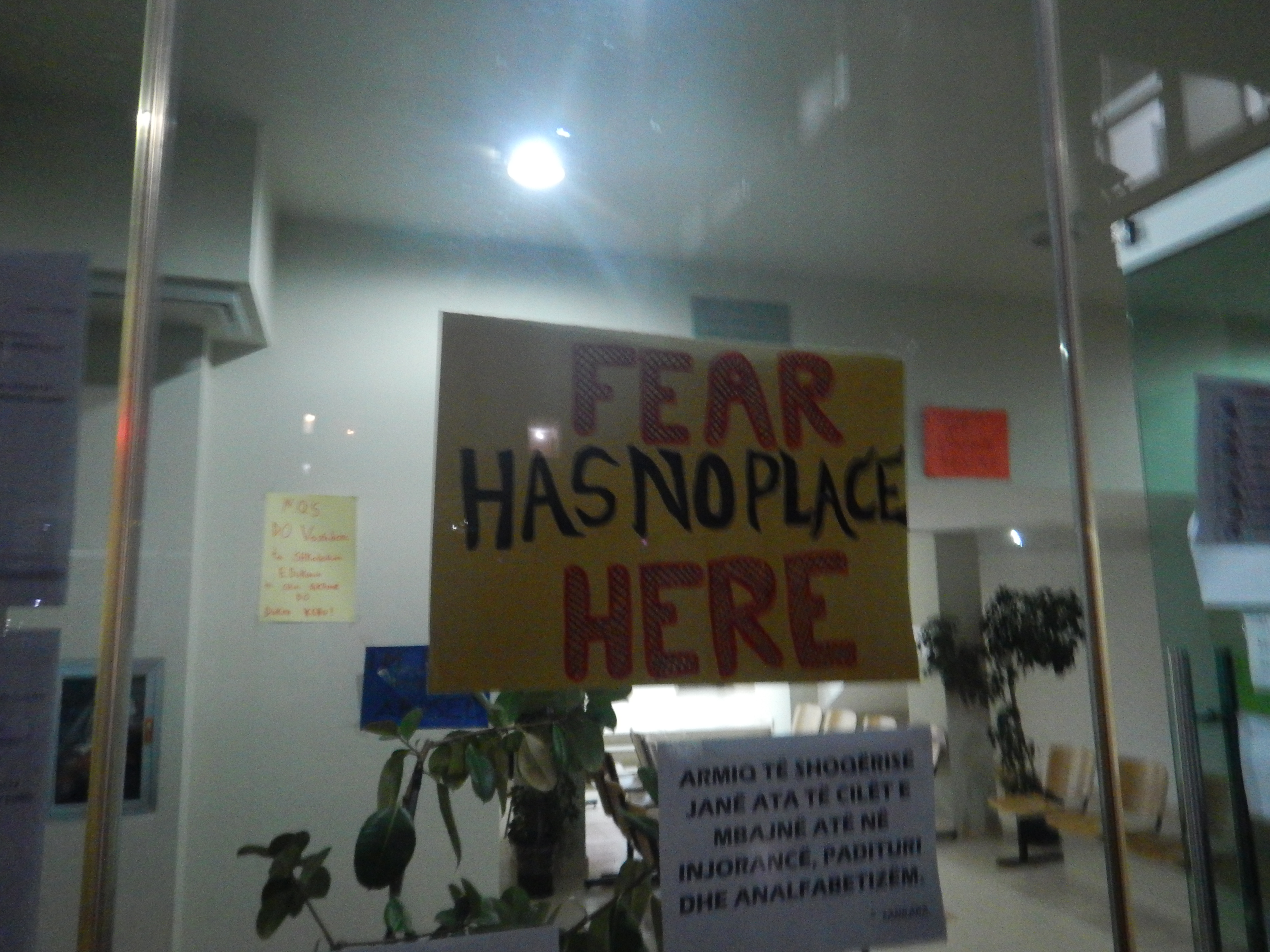 And, even better, when in my last comments I asked anyone who thought that they might actually want to become a community organizer to come meet me after the session, six lined up and gave me their full information, so that we could follow up, with one buying Nuts & Bolts so that she could get started.  Ten percent is a decent return on the ask, as we say in organizing.  Three were teenagers 17 and 18 in their final years in high school. 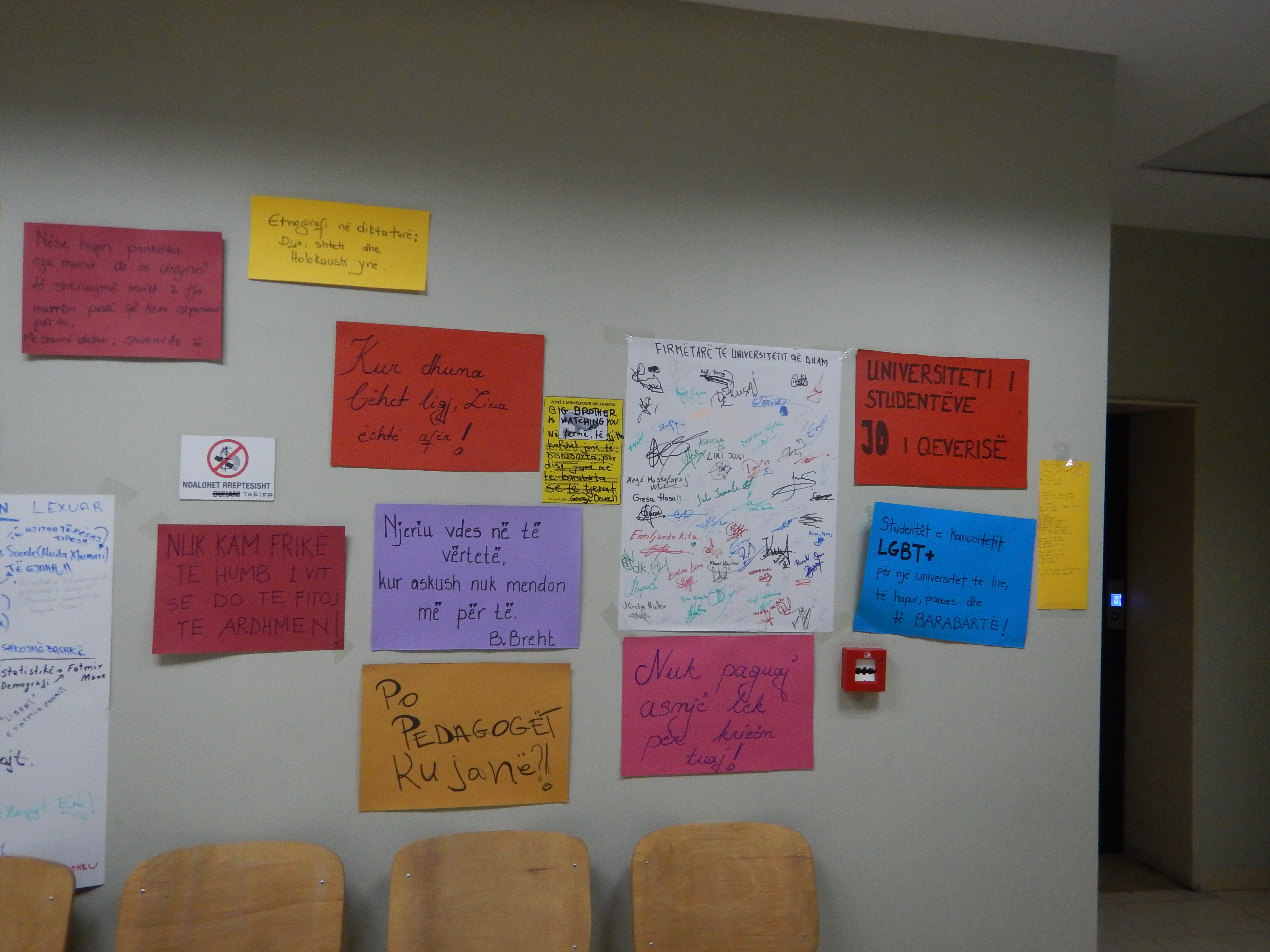 Community organizing has a future in Albania! 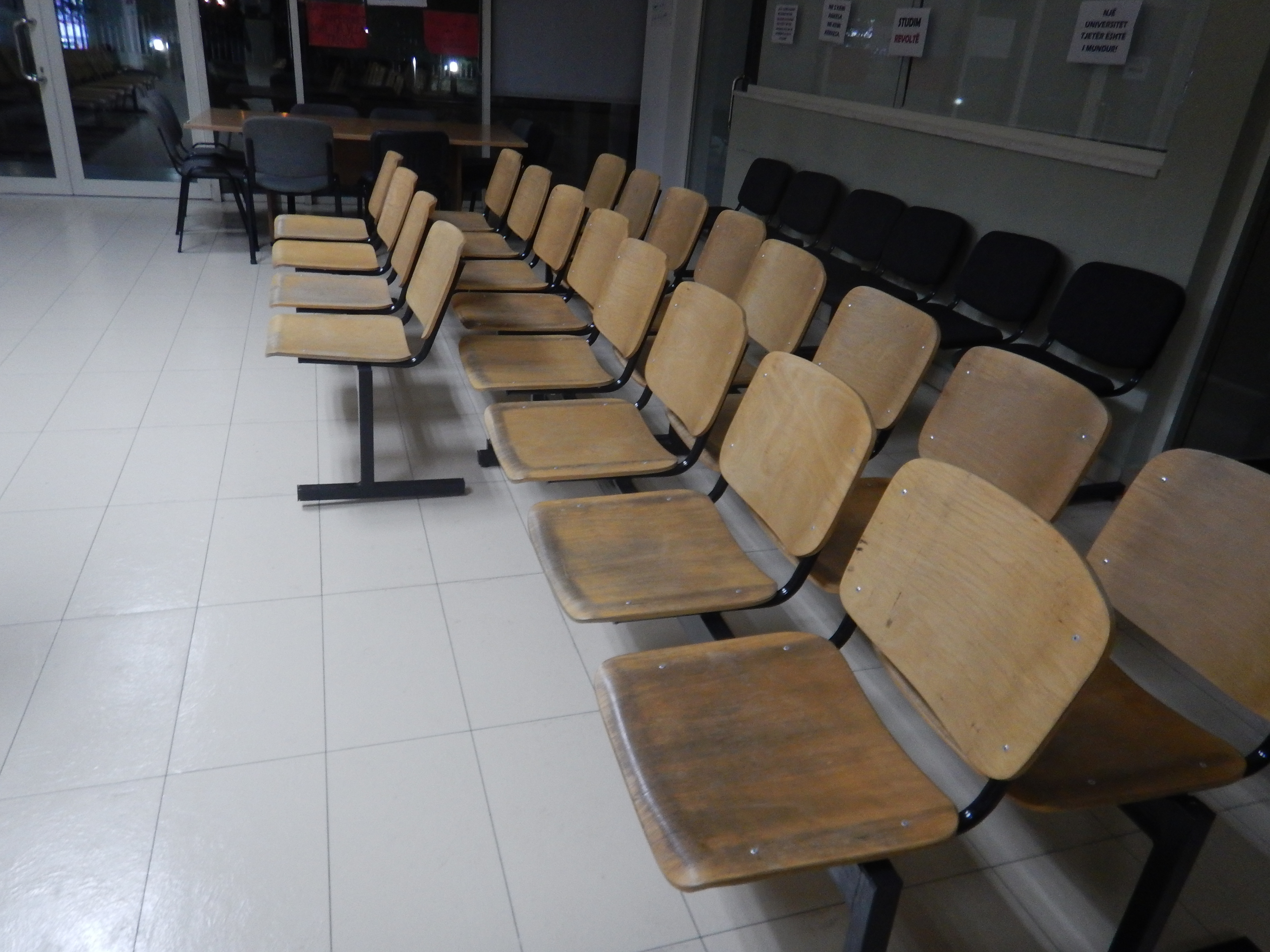