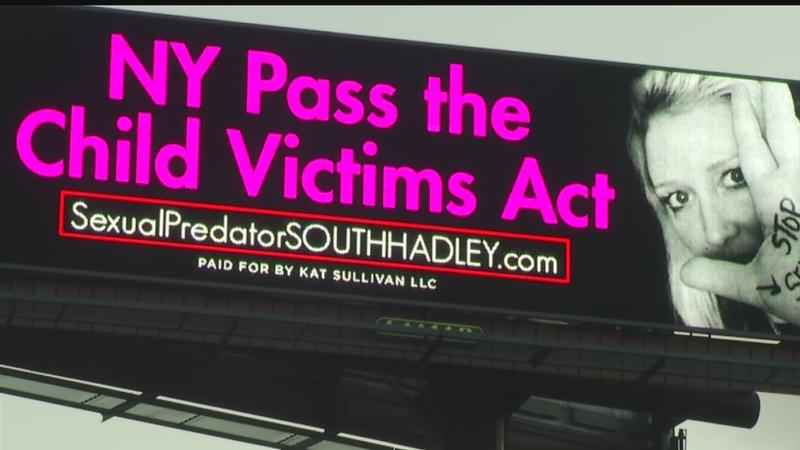 New Orleans   New York is making a horse’s butt of itself.

A woman, named Kat Sullivan, put up a billboard last year in Troy, New York, near where she went to school in the 1990s at the private Emma Willard School there.  She put up others last year in Massachusetts and Connecticut.  She also hired a pilot to fly over the New York State Capitol.  She is a registered nurse.  She did this with her own personal money.  Her issue was straightforward.  She was urging passage of the Child Victims Act, which would extend the statute of limitations on child sexual abuse.

She knew what she was talking about, because it had happened to her when she was a student at the Emma Willard School some twenty years ago, and she was sexually abused and raped by a teacher.  She held her tongue until 2016, when she finally disclosed the abuse.  The school finally investigated and found a pile of problems coming back decades.  The report they commissioned also fingered a teacher, who the Times reported, “was later fired for having a sexual relationship with a student.  That student was Ms. Sullivan.”

So, how is New York State in the process of making itself an example of ridiculous, mindless overreach and suppressing free speech?  Get this!  They are trying to claim that Kat Sullivan is a lobbyist and must register as one because her expenditures on the pilot and billboards is over the arbitrary limit, they had set demanding registration in a new law.  Worse, they are threatening to fine Sullivan $40,000 for not registering.

Sullivan for her part is through with taking abuse from any teacher or bullying state government.  She’s refused to register even though it would be relatively trivial for her to do so, a couple of hundred bucks maybe.  She says she has freedom of speech. She’s 100% right!  Furthermore, she notes that the New York lobbying law says a lobbyist has to have a client, and she doesn’t have one, unless you could call her own sweet self a client.  She also notes that only one of her billboards was in New York, and it was under the $5000 threshold triggering lobbyist registration.  I guess I could just say she’s not 100% right, but more like a 1000% right, but instead I’ll just say, those are technicalities.  Freedom of speech trumps any narrow definition that opposes grassroots lobbying, and, hey, what’s wrong with legitimate grassroots lobbying – that’s freedom of speech as well.  Hey, ACLU, get on the job.  Contact Kat Sullivan.  She doesn’t need any help it seems, but why not at least offer.

Furthermore, I know I am not the only one in America who watches movies on airline trips.  I see you in front of screens!  So, remember, 2017, “Three Billboards Outside Ebbing, Missouri” with Frances McDormand of ’Fargo” fame?  She played a woman – a mother – who rented three billboards to prod the police into further investigation of her daughter’s unsolved rape and murder.  This was about small town bumblers in flyover land, and they could handle it, but big time, sophisticated New York State wants to muscle up on this woman trying to get justice for other young women.

Maybe they don’t have movie theaters in New York anymore.  If not, they should stream a clue, back the frick up, let this woman – and millions of others – speak their piece, and remember that whether they don’t like it or President Trump doesn’t like it, some of us are still going to stand up and proclaim our freedom of speech at the top of our lungs.

Or failing that, on a billboard.

New Orleans    The old man of the Duck Dynasty corn-pone show on cable television was suspended for utterly reprehensibly racist comments about African-Americans and similarly outrageous slurs against gay Americans.  A big surprise for most of us is that they didn’t fire his ass.  The duck man, his family, and followers are expressing surprise and outrage that he wasn’t protected by freedom of speech.  Sometimes they are even throwing in other protections for him on religious grounds. Now we have to wonder not only what century is Phil Robertson living in, but also what country does he think he’s living in?

Spokespeople from the ACLU both nationally and in Louisiana, which is of course where this reprobate hides in the northern part of the state in the general area of Monroe, had to remind him the simple fact that the Constitution and the Bill of Rights only says what the government cannot do, including curtail your speech.  But, as everyone in the working class and most people in general who work for a living know, your freedom of speech has always ended at the workplace door – and many times outside of it as well – when it comes to bosses and employers.   Welcome to America, dude!

Of course the cable channel, A&E shouldn’t get any awards from human rights groups yet for having done the right thing.  Sure, they suspended the fool for running his mouth in an interview with GQ or some glossy magazine, but it turns out that Robertson and his clan had already finished wrapping up the fourth season of their “Duck Dynasty” drivel and had not started the fifth season, so this may be one of those suspensions that tells you that you can’t go to school during summer vacation, rather than something that is more serious than that.  Give A&E the thumbs up if, and after, they fire him, because this suspension or “hiatus” as they are calling it may be window dressing.  Oh, and if they do fire Robertson, some other bottom feeding cable channel will air this mess, and you can take that to the bank.

Robertson has been out in the country way too long calling his ducks.  Workers know that they can get fired for being arrested, even when never prosecuted and even when declared innocence.  Workers know that they can be canned for so-called disparaging remarks about their employers including that the pay is too low and the work sucks, unless they say it with others as part of collective activity.  Workers just don’t have that many rights on the job, which is why so many of them talk about working on the plantation in their offices and factory floors.  Oh, what am I thinking now?  Robertson thinks plantation workers are all singing, happy folks, so I guess his alien visit to our little planet is a total surprise.  You a happy quacker now, fella?

Unions have been arguing for a curtailment of employers’ ability to regulate speech, association, and access in the workplace in order to advance the rights of workers for decades, but employers, the almighty dollar, and the fact that property rights are in fact THE most sacred rights in the Constitution have meant no progress for workers on any of these fronts.  Maybe now that Robertson is on “hiatus” he might like to start undergoing some re-education not only on human rights and race, but also begin speaking up for workers to give himself something to do following his recent success in northern Louisiana politics before his hating ways and his mouth messed him up.

Whoops what am I thinking?  I must be from another planet as well, because haters are just going to hate, and I’m sure workers and unions are not far behind gays and African-Americans on his list.  Quack!  Quack!