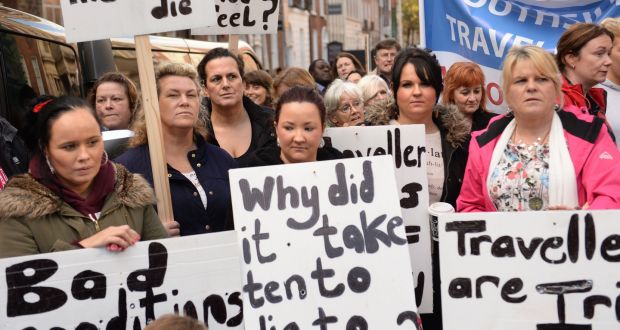 Travellers are stereotyped as criminals and are seen as untrustworthy, a protest outside the Dáil over Traveller accommodation. Photograph: Dara Mac Dónaill/The Irish Times

New Orleans  So, some interesting things about Ireland for my father and others.  Seems the sun is a rare occasion in the western part of the country, though it was beautiful every day we were there.  Yes, we were glad to bring it along!  Seems Guinness is a mandatory drink, and that there are arguments from pub to pub and from place to place on where it tastes the best.  There is an Irish breakfast as opposed to a standard English breakfast, but the only difference we noticed was a pancake came with the package in Dublin.

At our first meeting with tenant activists in Limerick, one woman identified herself as an “Irish traveler.”  Leaving the meeting, I asked her to explain Irish travelers to me, which she graciously did, and it was a fascinating education.  Quickly, it became evident that they were a discriminated against minority in Ireland and England as well.  They were known for their trailers.  When I later asked about the new Galway Housing Support Group’s banner that included a car trailer as well as house, that was part of their expression of solidarity.  Having been immersed in discussions with Roma and their issues and fight against discrimination, I asked if they were related, and she answered that they were separate genetically, though because of their high mobility, they were lumped together, and of course the discrimination was similar.

Some research on the web helped fill in some of the gaps, though many questions are unanswered about the history of travelers.  Genetic testing seems to have established that they are a distinct Irish ethnic group, and the arguments start from there.  The history of their discrimination though can be dated almost one-thousand years, possibly to when landholding became institutionalized, and they were forced off the land and plied a trade in metalwork.  Most speak English, but there are also separate dialects.  In the 1960’s many were still using horse drawn, wooden barrel covered wagons, and there were proposals to force them into something approaching reservations which had been tried in the Netherlands.  Home schooling, early mortality rates for elderly and infants, and similar issues are residues of their second-class status.

Irish travelers were finally recognized as a distinct minority fairly recently.  Census figures indicate that there are more than 30,000 in Ireland and 10,000 in England.  Estimates put travelers as high as 40,000 in the United States, dating likely to the 1860 potato famine and its forced migration.  According to Wikipedia:

The largest and most affluent population of about 2,500 lives in Murphy Village, outside of the town of North Augusta, South Carolina.[55] Other communities exist in Memphis, Tennessee, Hernando, Mississippi, and near White Settlement, Texas, where the families stay in their homes during the winter, and leave during the summer, while smaller enclaves can be found across Georgia, Alabama, and Mississippi.

With their status now more official in Ireland, the government provides a separate housing allowance for them in municipal budgets.  Activists we met with throughout our stay in the country reported that discrimination is still so keen in Ireland that municipalities have been turning large portions of the housing subsidy back to the government rather than embracing their traveler population.

And “Burning” by Maggie Rogers